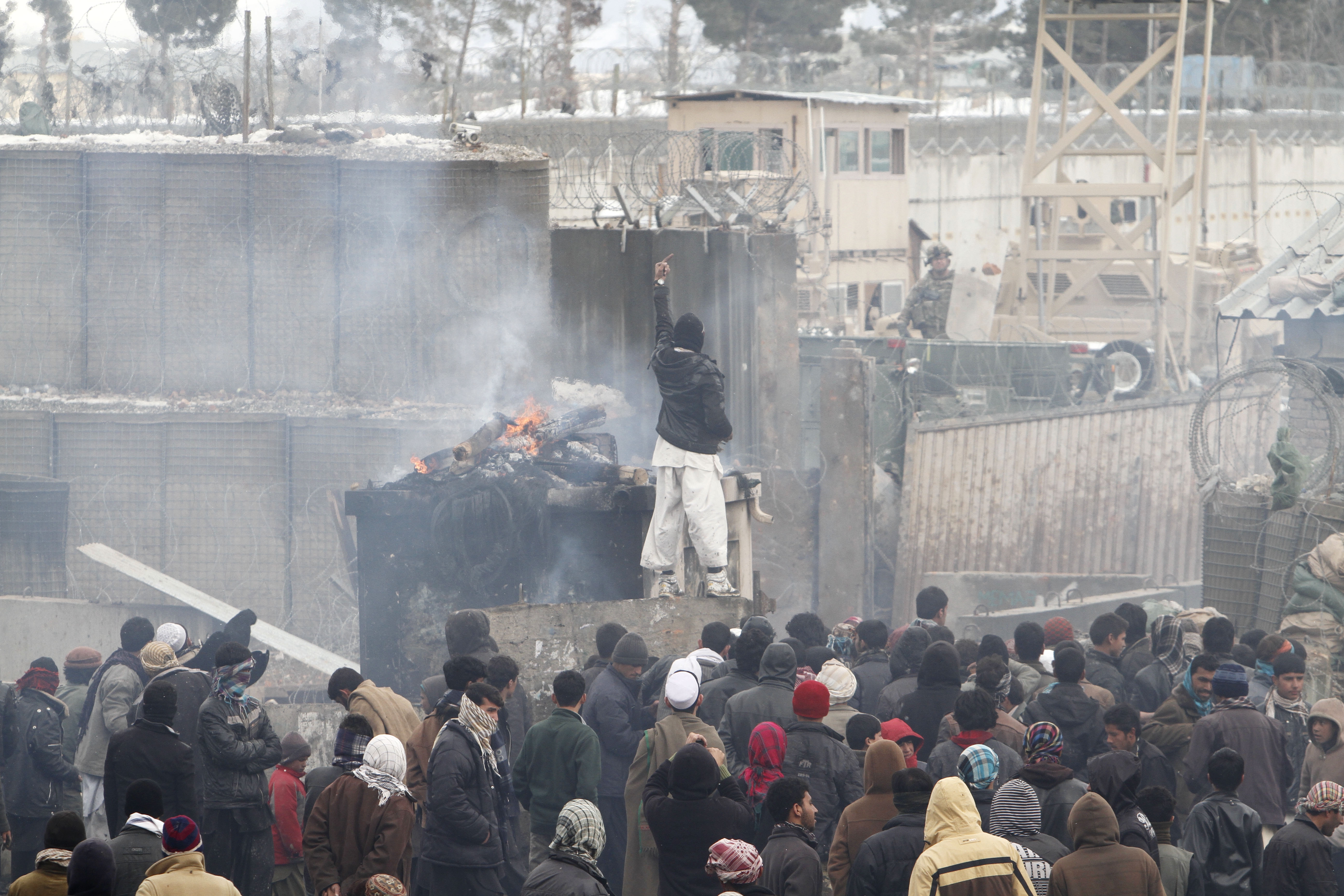 KABUL, Afghanistan - Muslim holy books that were burned in a pile of garbage at a U.S. military base in Afghanistan had been removed from a library at a nearby detention center because they contained extremist messages or inscriptions, a western military official said Tuesday.

The military official with knowledge of the incident said it appeared that the Qurans (Korans) and other Islamic readings were being used to fuel extremism, and that detainees at Parwan Detention Facility were writing on the documents to exchange extremist messages.

He spoke on condition of anonymity because he was not authorized to discuss the incident.

Parwan Detention Facility adjoins Bagram Air Field, a sprawling U.S. base north of Kabul, where more than 2,000 angry Afghans demonstrated against the incident.

The burning stoked anti-foreign sentiment that already is on the rise after a decade of war in Afghanistan. It also fueled the arguments of Afghans who claim foreign troops are not respectful of their culture or Islamic religion.

"Die, die, foreigners!" the demonstrators shouted. Some fired rifles into the air. Others threw rocks at the gate of the base.

A CBS News crew traveled to Bagram and saw the remnants of several tires which were set on fire at an entrance gate to the sprawling U.S. base, and as many as several hundred protesters were still chanting at another gate, but appeared to be dispersing.

White House press secretary Jay Carney apologized for the "deeply unfortunate incident," saying it doesn't reflect the respect the U.S. military has for the religious practices of the Afghan people.

U.S. Defense Secretary Leon Panetta added his voice, saying he disapproved of the conduct. He promised to review the results of the coalition's investigation to ensure that all steps are taken to prevent it from happening again.

U.S. Gen. John Allen, the top commander of American and NATO forces in Afghanistan, apologized to the Afghan people and said the books were inadvertantly given to troops for burning.

The Quran is the most sacred object in the daily lives of Muslims and burning it is considered an offense against God. The Quran is so important in the faith that Islamic teaching spells out how it should be handled, including directing anyone who touches it to be in a state of ritual purity. Muslims can only dispose of Qurans in very specific ways, including burning or burying those that have been damaged or corrupted to prevent God's word from being defiled.

"This was unintentional," he said, adding that no member of the coalition deliberately set out to defame Islam or descecrate the religious materials of the faith.

In a statement, Afghan President Hamid Karzai condemned the incident and appointed a delegation to investigate. He said initial reports were that four Qurans were burned.

Early Tuesday, as word of the incident spread, about 100 demonstrators gathered outside the base in Parwan province. As the crowd grew, so did the outrage.

"They should leave Afghanistan rather than disrespecting our religion, our faith," Hakim said. "They have to leave and if next time they disrespect our religion, we will defend our holy Quran, religion and faith until the last drop of blood has left in our body."

Ahmad Zaki Zahed, chief of the provincial council, said U.S. military officials took him to a burn pit on the base where 60 to 70 books, including Qurans, were recovered. The books were used by detainees once incarcerated at the base, he said.

"Some were all burned. Some were half-burned," Zahed said, adding that he did not know exactly how many Qurans had been burned.

Zahed said five Afghans working at the pit told him that the religious books were in the garbage that two soldiers with the U.S.-led coalition transported to the pit in a truck late Monday night. When they realized the books were in the trash, the laborers quickly worked to recover them, he said.

"The laborers there showed me how their fingers were burned when they took the books out of the fire," he said.

Afghan Army Gen. Abdul Jalil Rahimi, the commander of a military coordination office in the province, said he and other officials met with protesters, tribal elders and clerics to try to calm their emotional response. "The protesters were very angry and didn't want to end their protest," he said.

Later, however, the protesters ended the rally and said they would send 20 representatives from the group to Kabul to talk with Afghan parliamentarians and demanded a meeting with President Hamid Karzai, Rahimi said.

The governor's office in Kandahar province in southern Afghanistan called the incident a "shameful move by some stupid individuals."

Zia Ul Rahman, deputy provincial police chief, said between 2,000 and 2,500 protesters demonstrated at the base.

"The people are very angry. The mood is very negative," Rahman said while the rally was going on. "Some are firing hunting guns in the air, but there have been no casualties."

In April 2011, Afghans protesting the burning of a Quran by a Florida pastor turned deadly when gunmen in the crowd stormed a U.N. compound in the northern city of Mazar-e-Sharif and killed three staffers and four Nepalese guards.

Separately, officials in Helmand province in the south said insurgents beheaded four people Sunday night in Washer district on the charge that they were spies.

"The militants told the local people that they were guilty because they were carrying satellite phones," provincial spokesman Daoud Ahmadi said.

Taliban spokesman Qari Yousef Ahmadi said that the militant group was not involved in the killings.

Also in the south, a NATO service member died Tuesday as a result of a non-battle related injury. The U.S. led coalition gave no further details about the death. So far this year, 44 NATO service members have been killed in Afghanistan.