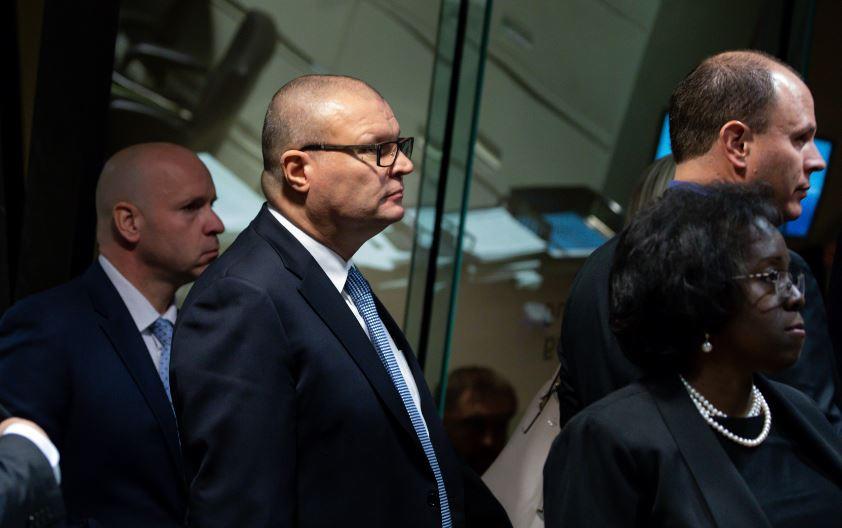 CHICAGO -- The trial of three Chicago police officers charged with lying to protect a now-convicted fellow officer from criminal prosecution after he fatally shot black teenager Laquan McDonald began with prosecutors pointing to reports they contend were falsified and defense attorneys putting much of the blame on the teen himself.

The bench trial, in which a judge and not a jury will decide the defendants' guilt or innocence, is expected to last about a week.

The three men are on trial for felony charges of obstruction of justice, official misconduct and conspiracy. The case marks what's believed to be the first time in Chicago history that members of the police force have faced criminal charges for trying to cover up the actions of a fellow officer in an on-duty shooting.

Police encountered McDonald on October 20, 2014, after being called to a report of someone breaking into vehicles. At one point, McDonald punctured a squad car tire with a knife. When Van Dyke arrived, police had McDonald mostly surrounded on a city street and were waiting for an officer to arrive with a Taser to use on the 17-year-old, who was holding the knife. Van Dyke opened fire, fatally shooting McDonald.

A jury last month convicted Van Dyke of second-degree murder and 16 counts of aggravated battery in McDonald's death, rejecting his claim he was defending himself when he shot McDonald 16 times.

Prosecutors contend that Walsh, who was Van Dyke's partner, and Gaffney, a patrolman, wrote among other things that McDonald assaulted Van Dyke, reports CBS Chicago. Gaffney claimed Van Dyke and other officers had been injured. Further, Walsh supported Van Dyke's claim that McDonald lunged at the two of them with a knife and that, even after bullets knocked McDonald down, he "attempted to get up while still armed with a knife," the station reports.

None of these details aligned with the dashcam video, which showed McDonald was walking away from Van Dyke when he was fatally shot.

Prosecutors say March — a detective who investigated the shooting — not only cleared Van Dyke of any wrongdoing by saying the video matched witness accounts, but also told another officer to include false information in her report, CBS Chicago reports. March and Walsh have since left the department. Gaffney remains on the force but has been suspended.

Defense attorneys, who dismissed any suggestion that their clients created a cover story to help Van Dyke, also took a tack that proved unsuccessful for Van Dyke's attorneys in the trial that ended in his conviction. They pinned the blame for McDonald's death on the shoulders of the teen.

"This is a case about law and order," March's attorney, James McKay, told the judge. "It's about Laquan McDonald not following any laws that night."

McKay also called McDonald a "crazed individual" with the drug PCP in his system.

William Fahy, Gaffney's attorney, reminded the judge that McDonald had punctured the tire of Gaffney's squad car and smashed a knife into the windshield of the vehicle. Fahy said, "that was an assault."

Attorneys for the officers dismissed the idea of a conspiracy and said the case amounted to different perspectives, not a crime, reports the Chicago Tribune. But Holmes argued the reports filed by the officers are contradicted by the video.

"The case is clear, the case is straightforward, and it is concise," she reportedly said. "It boils down to what the defendants wrote on paper versus what is shown on video."

Testimony started later in the day with a witness whose focus was on the crux of the prosecution's case: the police reports. Joseph Perfetti, a civilian director of the police department's record services division, read from March's report on the witness stand.

"Criminal attacked officer," Perfetti said was written in the former detective's report of what happened the night of Oct. 20, 2014, when Officer Van Dyke confronted McDonald. "Then that officer killed criminal."

The police union has suggested the officers are victims of politics, but others contend any potential convictions would demonstrate that officers who adhere to a "code of silence" are not above the law.

Holmes alluded to that code when she told the judge about the treatment within the department of Officer Dora Fontaine, one of prosecution's key witnesses. She is expected to testify that March directed her to report that McDonald had advanced at Van Dyke and Walsh and swung his knife at him. Those claims are not backed by the dashcam video.

"She immediately contacted her lawyer. She wanted to set the record straight, but her reward for telling the truth was to be called a rat and to be told that she would not be safe on street duty," Holmes told the judge.

But McKay argued in opening statements that Fontaine is simply trying to save her own job.