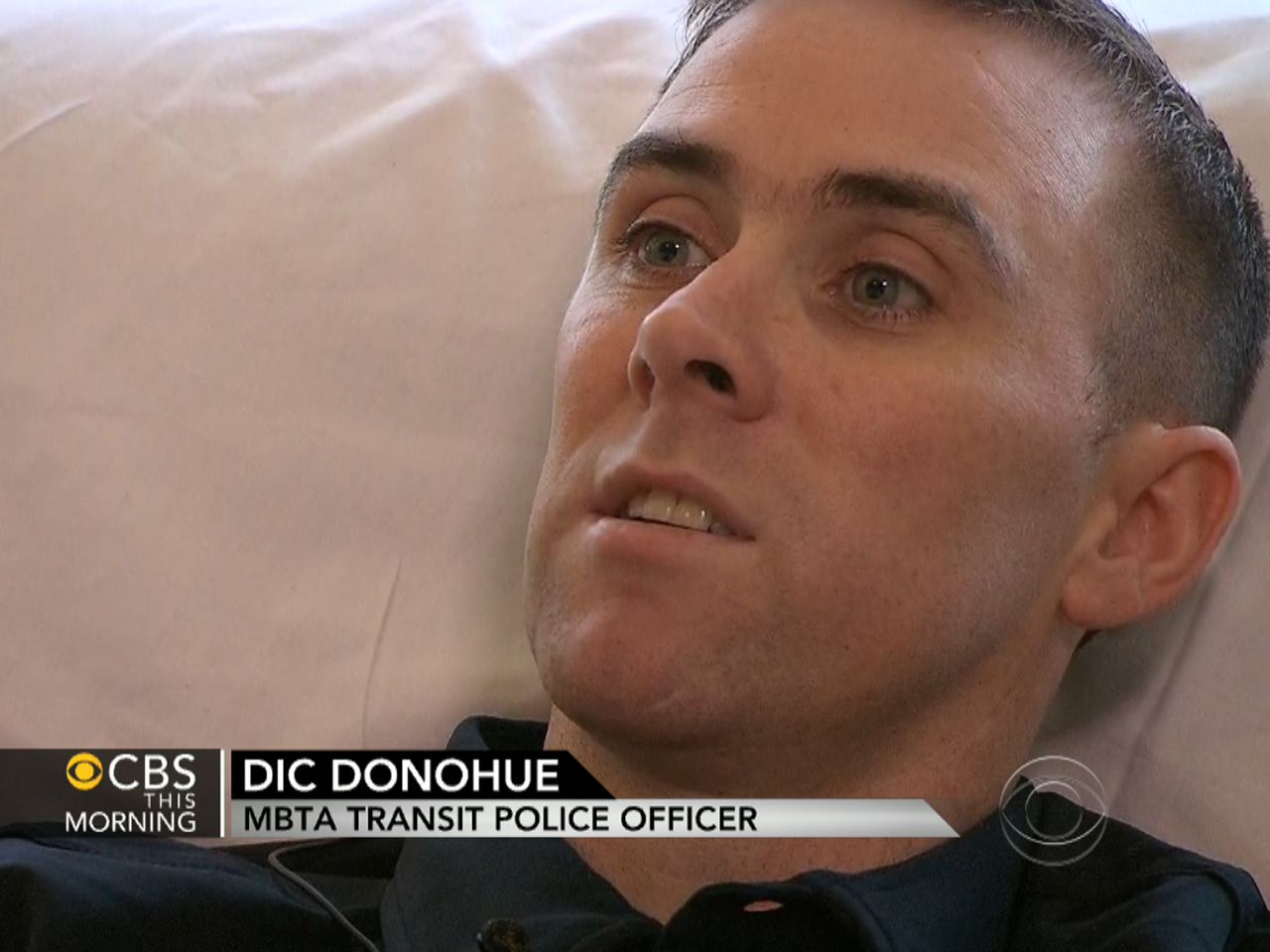 (CBS News) Richard "Dic" Donohue, the Massachusetts Bay Transportation Authority police officer who nearly died in the shootout with the Boston Marathon bombing suspects, is still recovering in the hospital.

He is learning to walk again after he was shot in the leg during the shootout. His femoral artery was severed and he almost bled to death that night.

Donohue had responded to a call about an officer down after Massachusetts Institute of Technology police officer Sean Collier had been shot in the head at close range. Collier and Donohue were classmates in the academy and good friends.

"I had some text messages I sent to a couple friends of mine about about Sean goin' down," Dic Donohue said. "You know-- somebody said, 'Hey are you on scene?' I said 'yes,' and -- and she said, 'Was it Collier?' And I said 'yes'."

In the video below, Dic Donohue remembers his friend Sean Collier:

At the time, Donohue didn't realize it was the Boston Marathon suspects who had killed Collier and would then engage him and other officers in a massive firefight that included gunfire and bombs.

"Once I was shot, my partner said that I started to take a couple steps," Dic Donohue said. "And he tackled me, just to get me -- just to get me down. And you know, guys help from a whole bunch of different departments, you know, ripping my shirt off, ripping my vest off -- starting CPR. You know, reaching into -- physically reaching into my leg to hold stuff together."

In the video below, Dic Donohue talks about the injuries he sustained during a shootout with the marathon bombing suspects.

Donohue doesn't remember much about that night. But his wife, Kim Donohue, remembers vividly how the nightmare unfolded and the last contact she had with her husband before he was shot.

Dic Donohue was rushed to Mount Auburn Hospital. His heart stopped beating and he wasn't breathing.

Sleeping at home, Kim Donahue was awakened at 1:30 a.m. by the wailing of their 7-month-old baby boy. It was like the warning of a coming storm.

Kim Donahue said, "Right at that time, the baby just went nuts. Just was hysterical, just going absolutely nuts. And while I was tending to him was when I got the doorbell. And I just looked at this officer and I just said, 'You are my worst nightmare.'"

Miller asked, "You said those words?"

For more with Kim Donohue on the moment she learned of her husband's condition, watch the video below.

When she arrived at the hospital, her husband was alive, but barely.

Kim Donohue recalled, "I didn't understand the severity of what had happened until a doctor pulled me aside and said, 'Well, we just got his heart back.' I said, 'What -- what do you mean?' They said, 'We just got his pulse back.' They had a priest waiting for me, they were handing me his wedding ring, his badge, his phone."

Dic Donahue was in surgery for eight hours. It was only then that Kim Donohue was able to see her husband.

"He looked like he was dead when I saw him," Kim Donahue said. "He had tubes coming out of everywhere a tube could come out of. In his chest, in his mouth, out his nose. I remember I pulled a couple of surgeons and doctors aside and I said, 'We have a 7-month-old baby.' I said, 'You have to just -- he has to come through.' I said, 'It's not a question.' I said, 'You cannot come back in this room and tell me anything else.' I said, 'That's the only answer I want.' And every time they came in, it was a little bit better and a little bit better."

Miller asked, "You know, there's this horrible cliche that, you know, out of every terrible experience, there's this silver lining. Have you found one?"

Kim Donohue said, "There's more of a silver lining in this than anything bad that's come out of this. And when Dic gets out of the I.C.U. and when he feels better, this will ultimately be the best thing that has ever happened to us. We will never not enjoy a day. We will never not enjoy a hug or a kiss. This will all fade into a bad memory and all of the good stuff is what is gonna remain."

Dic Donohue says he has no regrets about the actions he and his fellow officers took that night and can't wait to return to the job.

Dic Donohue said, "We jumped in there and you know, did what we have to do. That's why we, you know, that's why we put on the badge, take the oath, put our hand up and wear the uniform. You've just gotta go on gut instinct and what you think is right."

To watch the full interview and learn more about the case, watch John Miller's full report and analysis in the video above.