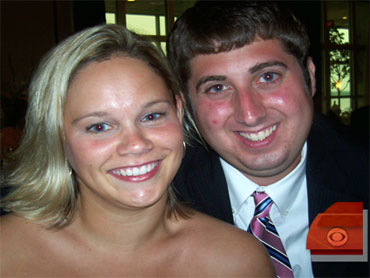 Well, it may be risky business, but office romance is on the rise. According to a recent survey, The Early Show found one couple who have turned their office encounter into a lifetime commitment.

Brian and Erica Carnevale's love story began seven years ago in one the least romantic places -- at the office. They work at a public relations company called Text 100 in Rochester, N.Y.

"When I was hired full-time, I was moved to sit next to Brian since we'd be working on the same projects. I was impressed with how great he was at his job, not great looking, but..." admitted Erica.

It was not love at first sight.

"There wasn't something immediate, you know, a spark that happened," Brian added.

But a friendship blossomed and after a few months, Brian made his move asking Erica out.

"This was my first position out of college and so I really wanted to make sure that this wasn't going to affect my career," she said.

"I knew that if I was going to make a move like this, it needed to be for the long haul," he said.

They tried keeping their relationship a secret that was until the company's Christmas party where they finally revealed their romance.

"There was a car pool home after at the end of the night and we got dropped off at the same location and there were a few co-workers that clapped and we're like 'finally, thank you for admitting this, we've known,'" Erica explained.

Brian and Erica still work together, but now as husband and wife. And in the spring, they'll take on a second job as first time parents.

"How could it be any easier than finding your girlfriend and wife at work where you spend most of your time anyway, right?" Brian said.

The happy couple stopped by The Early Show to share their story with Early Show co-anchor Harry Smith and co-author of "Office Mate, Stephanie Losee.

Still relatively newlyweds, the Carnevales were glowing from their wedding and baby news - Erica's due date is May 8, close to Mother's Day.

Brian and Erica knew they were crossing over from pals to something more during a dinner date when the topics got a little personal, and it "kind of got romantic."

"There was candle light, great food, and I think I realized this is someone that could I see myself dating," Erica said.

"Did either of you have any misgivings - Brian as the senior person in the firm and Erica being brand new?" Smith asked.

"There are HR (Human Resources) rules at the office. And for the most part, it's use common sense. And don't make your co-workers uncomfortable. And I think we did a good job, keeping everyone at ease," Brian explained. "And there were certainly misgivings and like I said in the piece, you got to be in it for the long haul I think."

According to Losee, people try to keep it secret for a long time until they know they're really in a relationship. But the truth is that the gang probably figured out they were going to date before they did, she said.

But no matter what stage an office romance may be in, there's usually always gossip.

So, how do you avoid the gossip?

"If you conduct yourself with dignity, people will respond accordingly," Losee said. "Don't go in to the supply closet or Xerox your butt on the copier," she joked.

Although it worked out for the Carnevales, office romances don't always have good endings. Oftentimes, the exes end up two cubicles apart.

"The theory in our book 'Office Mate' is that the workplace is the village of the 21st century. So go back in time, there you are in the village and you've known these boys all your life and you're going date one of them and your grandmother says 'now, don't date that nice boy from down the street because if you break up, you're going to see him at the grocery store. It will be terrible. Find someone from the next town," Losee explained.

It turns out that it's not always that easy, sometimes you can't help the way you feel. But things are looking up.

"So as the workforce is getting younger, the acceptance rate is going way up. Michelle and Barack met at the office. She was his superior. He had to offer to quit his job for her to date him," Losee said.

So as long as you're discreet and if you're thinking about going for the long haul, it can be right thing.

"Absolutely. We get to spend a ton of quality time together this way," Brian said.

But for a couple being together at the workplace can mean bringing the work home too.

"We tend to, but you have to have some boundaries," Brian explained. "We don't car pool together, for example. We get time in the morning, time coming home. We have to break off the work conversation at dinner time."

"It's bad for the environment, but good for our marriage," Erica joked.