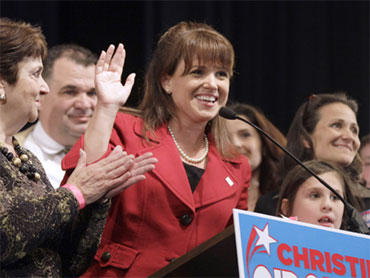 "There has been no impermissible use of campaign funds. … I have never taken a dime in salary from the campaign," she said on CBS' "The Early Show". O'Donnell also said she hadn't been "notified of any investigation from any federal authorities."

On Wednesday, a person familiar with the matter told the Associated Press that federal authorities had launched a criminal probe of O'Donnell.

The person spoke to The Associated Press on condition of anonymity to protect the identity of a client who has been questioned as part of the probe. The case, which has been assigned to two federal prosecutors and two FBI agents in Delaware, has not been brought before a grand jury.

O'Donnell, the Delaware Republican and tea party favorite who scored a surprise primary victory this year only to lose badly in the November general election, set a state record by raising more than $7.3 million this year and has been dogged by questions about her personal and campaign finances.

In a statement Wednesday, she suggested the allegations were being driven by her political opponents on the right and left, including Vice President Joe Biden.

Scorching Shoes To Style Your Summer

At least two former campaign workers have alleged that O'Donnell routinely used political contributions to pay personal expenses including her rent as she ran for the Senate three consecutive times, starting in 2006. She acknowledged in a newspaper interview in March that she paid part of her rent with campaign money, arguing that her house doubled as a campaign headquarters.

On "The Early Show," O'Donnell blasted one of her accusers as a "disgruntled volunteer who … gave so many people the creeps in 2008 that he was let go."

The U.S. Attorney's office in Delaware has confirmed it is reviewing a complaint about O'Donnell's campaign spending made this year by a nonpartisan watchdog group, Citizens for Responsibility and Ethics in Washington. But officials in the office and the FBI declined to say whether a criminal investigation was under way.

O'Donnell called the allegations politically motivated and singled out Biden, who represented Delaware in the Senate for decades.

"Given that the king of the Delaware political establishment just so happens to be the vice president of the most liberal presidential administration in U.S. history, it is no surprise that misuse and abuse of the FBI would not be off the table," she said in the statement.

On "The Early Show," O'Donnell cast a wider net in describing her foes, including members of the Republican establishment.

"We depend receive several tips from credible sources that both the Republican and Democrat political establishment in Delaware were joining forces to launch fake accusations and phony lawsuits and continue these … false accusations to circulate in the media in order to stop this [Tea Party] movement in its tracks," she claimed.

CREW alleged in a complaint last September that O'Donnell improperly used more than $20,000 in campaign funds to pay her rent and other personal expenses. The group also asked Delaware's federal prosecutor to investigate.

Federal law prohibits candidates from spending campaign money for personal benefit. FEC rules state that this prohibition applies to the use of campaign money for a candidate's mortgage or rent "even if part of the residence is being used by the campaign," although O'Donnell's campaign maintained that it was told otherwise by someone at the agency.

O'Donnell drew national attention in September when she upset U.S. Rep. Mike Castle, a moderate Republican, for the Senate nomination with support from the ultraconservative tea party movement. She was handily defeated in November by Democrat Chris Coons following a campaign that focused largely on past controversial statements, including that she'd "dabbled into witchcraft" when she was young.

One former O'Donnell staffer, Kristin Murray, recorded an automated phone call for the Delaware Republican Party just before the primary, accusing O'Donnell of "living on campaign donations - using them for rent and personal expenses, while leaving her workers unpaid and piling up thousands in debt."

Another former aide, David Keegan, said he became concerned about O'Donnell's 2008 campaign finances as she fell behind on bills and had no apparent source of income besides political contributions. He submitted an affidavit to CREW alleging that she used campaign money to cover meals, gas, a bowling outing, and rent to a landlord, Brent Vasher.

Vasher, a nephew of Keegan's and a one-time boyfriend of O'Donnell, declined comment when asked by The AP if he had been contacted by authorities. Vasher bought O'Donnell's house in 2008 after she was served with a foreclosure notice, then charged her rent to stay there, according to CREW's complaint.

In a message sent last week to The AP, Keegan said he had not been questioned as part of a criminal investigation, and that he considers himself only a "catalyst" in a case in which several people must be questioned to scrutinize O'Donnell's accounting practices and alleged misuse of campaign funds.

After losing two treasurers in 2009, O'Donnell named herself campaign treasurer until this past summer. Another short-term treasurer took over in August and resigned less than two months later, at which point campaign manager Matt Moran added the treasurer's role to his responsibilities.

Murray, the former aide who recorded the automated message, also said she had not been contacted about the investigation.

Democrat Charles Oberly III, the U.S. attorney for Delaware, and his predecessor, David Weiss, did not immediately return messages Wednesday seeking comment. Oberly was sworn in Tuesday as Weiss' successor.

Kim Reeves, a spokeswoman for the office, reiterated Wednesday that the office was reviewing the CREW complaint. She would not confirm the existence of a criminal probe.

Rich Wolf, a spokesman for the Baltimore office of the FBI, said he could neither confirm nor deny that any investigation was taking place.

O'Donnell, who announced just after Election Day that she had signed a book deal, hasn't held a full-time job in years and has struggled to explain how she makes a living.

She reported in July that she earned only $5,800 in income for the previous 18 months through freelance public relations work. She said she lived mostly on a savings account that she reported in an amended Senate disclosure report as being worth between $1,000 and $15,000.

"We've been warned by multiple high-ranking Democrat insiders that the Delaware Democrat and Republican political establishment is jointly planning to pull out all the stops to ensure I would never again upset the apple cart," O'Donnell said in her statement Wednesday. "Specifically they told me the plan was to crush me with investigations, lawsuits and false accusations so that my political reputation would become so toxic no one would ever get behind me."