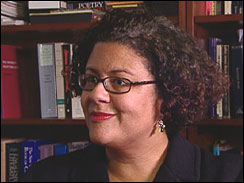 (CBS)
Meet Elizabeth Alexander. The 46-year-old American poet and Yale professor was plucked from relative obscurity by President-elect Barack Obama last month, when he invited her to compose a poem for his inauguration.

On Jan. 20, Alexander will deliver her ode to Obama in the form of an "occasional poem," verse written for a specific, well, occasion.

Alexander, who was born in Harlem and raised in Washington, has known Mr. Obama for a decade. She believes her poetry "attends to history," according to the New York Times, including "sometimes thorny and difficult American history." You can check out a couple sample poems here.

Our chief national correspondent, Byron Pitts (one sidenote: tremendous congrats, Bryon, on the new gig!) sat down with Alexander, and tonight on the Evening News, he'll show you a slice of this remarkable woman's life that will come full-circle next week. She'll be a part of history – again. For now, you can learn more about Alexander at Poets.org.

In other inauguration-poetry news, the Association Press made an odd request of a few of the country's best-known poets. It asked them to draft their own inauguration poem. The reaction? Mixed. From the AP:

One of the poets who didn't respond to the AP's invitation was poet Elizabeth Alexander. It turns out she'll be reciting an original poem at the inauguration.