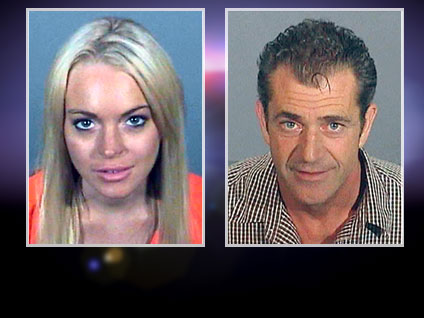 NEW YORK (CBS) It hasn't been a good week for Mel Gibson or Lindsay Lohan. And people are now placing bets on the outcomes of their misfortunes.

Recordings purported to be of Mel Gibson have been posted on the Internet, filled with expletives, racist remarks and threats against his ex-girlfriend, Oksana Grigorieva. He's also the focus of a domestic violence inquiry involving Grigorieva.

Lohan, on the other hand, surrendered herself to authorities on Tuesday to begin a 90-day jail sentence she received for violating her probation. She likely won't serve the full sentence, but when she gets out she's required to head to three months of court-ordered rehab.

The oddsmakers at YouWager.com, a leading sportsbook, have placed odds on what will happen next to both of Hollywood's latest scandal-makers, with odds pointing to rehab for Gibson and a religious epiphany for Lohan.

The full odds are below: