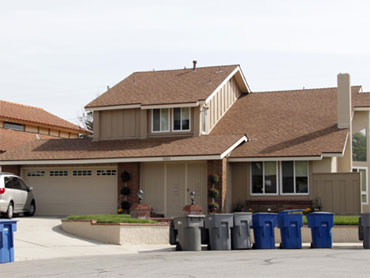 Nadya Suleman's octuplets have brought her plenty of fame, but fortune appears to be another story.

Suleman's father, Ed Doud, has defaulted on a $450,000 balloon payment on that house, mortgage holder Amer Haddadin said Wednesday. He told The Associated Press he plans to file foreclosure papers in court within days if he doesn't get his money.

Although Suleman's lawyer, Jeff Czech, said earlier this week his client's father was hoping to work something out, he was blunt when it came to the balloon payment: "Mr. Doud at this moment doesn't have $450,000 to pay off," he said.

In a brief e-mail Wednesday, he added that he was negotiating with Haddadin's attorney for more time to refinance.

Czech did say that Suleman accepted an offer from People for the Ethical Treatment of Animals - $5,000 to put a sign in her front yard proclaiming, "Don't Let Your Dog or Cat Become an Octomom. Always Spay or Neuter."

As an added incentive, the animal rights organization had said Wednesday it would throw in a month's supply of veggie burgers and veggie hot dogs for Suleman and her 14 children, who range in age from 1 to 8.

Suleman was also offered a different opportunity to raise money quickly, although not in ways she would want to.

Hirsch assured it would be, well, as tasteful as those things can be with her input on male co-stars and script.

He declined to say whether Suleman had expressed interest in the offer, but Czech indicated she had rejected it out of hand.

When Suleman's children were born in January 2009 it seemed inconceivable that a little more than a year later she might be scrounging up hot dog offers from an animal rights group. The arrival of the longest-surviving octuplets in history was hailed as a medial miracle and it appeared a joyful public was ready to line up to help raise them, providing free diapers, food and other necessities.

There was also talk of book and movie deals and perhaps a reality show along the lines of "Jon & Kate Plus 8."

But public opinion quickly turned against her when it was discovered she was a single mother who had conceived eight children by in vitro fertilization when she already had six youngsters to raise. What's more she was unemployed and surviving on a combination of student loans, disability checks for other children and workers' compensation checks for an old back injury. At the time she was also living with her mother whose own home was in foreclosure.

Still, she made some money.

The European production company, Eyeworks, whose credits include "Breaking Bonaduce" and "The Biggest Loser," signed a deal under which her children would earn nearly $250,000 over a three-year period.

Suleman also struck a deal with RadarOnline.com that came to light after the tabloid site was cited by the state labor commissioner for allegedly failing to get the required permits to videotape her children and for filming too many hours a day and too late at night.

But she also spent money, too. She's been photographed shopping at expensive stores, getting manicures and working out.

Under the terms of the deal, Haddadin said, he was to receive $4,000 in monthly payments, followed by the balloon payment, which was due March 10.

Suleman's attorney has said Haddadin failed to disclose several major defects in the home, including one that leaves it susceptible to flooding during rainstorms.

"Toys were floating around in the garage," during a recent storm, he said.

Haddadin angrily denied there were any problems with the house.

"It was in good condition," he said. "I lived there 11 years and we had no problems."