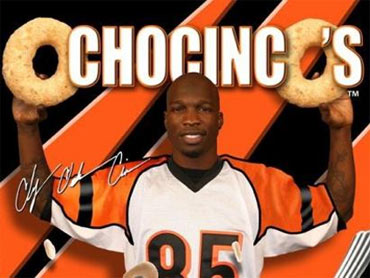 Charity-minded callers are getting intercepted by a phone-sex line because of a typo on Chad Ochocinco's Cereal boxes.

The phone number is supposed to connect callers to Feed the Children, which benefits from sales of the Cincinnati Bengals wide receiver's cereal. But the box has the wrong toll-free prefix, meaning callers get a seductive-sounding woman who makes risque suggestions and then asks for a credit card number.

Cincinnati-based Kroger Co. said Thursday it was pulling all Ochocinco cereal boxes from its grocery shelves because of the error. Some local stores had them on special display after the launch about a month ago.

A message was left Thursday for Pittsburgh-based PBL Sports, which specializes in limited-edition products featuring star athletes and their favorite charities.

Ochocinco told WCPO-TV that the number was clearly a mistake and he's sure that the maker will fix the problem.

As of Thursday morning, he hadn't mentioned the error in any of his frequent messages on the Twitter social media site. On Wednesday, he had urged fans to go to his website to order the cereal and "Start your day with a lil suga!!!"