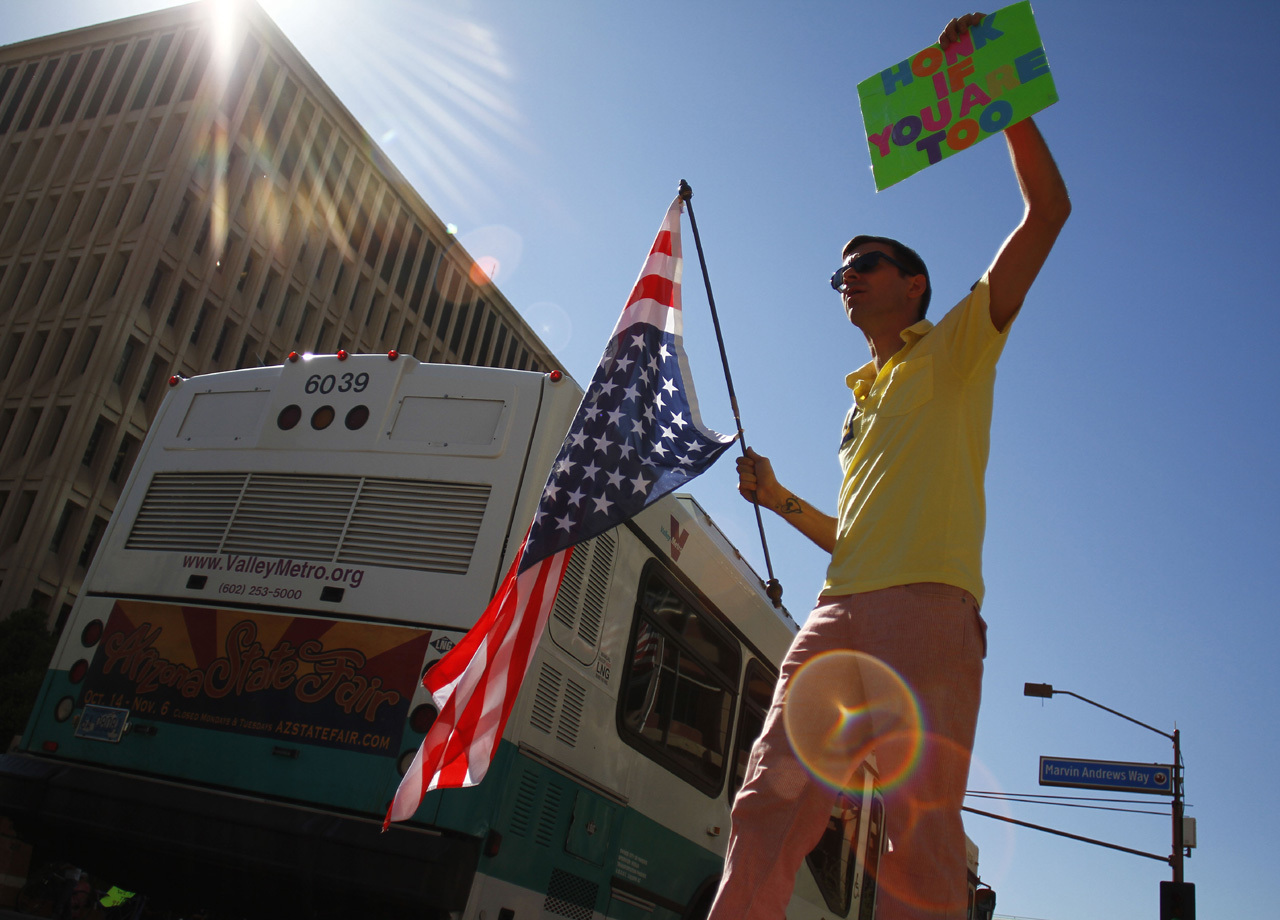 Many pundits argue that this is a leaderless protest. But this view of leadership is stuck in the old model of the single heroic leader in command and control mode. What we are witnessing is a different leadership model-distributed leadership. Here multiple leaders take on various leadership activities in an attempt to move toward the collective good.

Here there is no one person who is "THE LEADER"- many are standing up to take on the role. OWS protesters have shown signs of leading simply by showing up and creating vivid images of support for the cause. Now their roles are becoming more specialized.

Protest leaders have excelled in the early stages of mobilization. First, they have exhibited temporal leadership: they have acted at the right moment, somehow figuring out the instant when frustration was ready to erupt into collective action. They have taken to the streets at a time when a power vacuum exists, with neither Republicans nor Democrats able to capture the public narrative. The key temporal threat-winter.

Second, protest leaders have engaged in effective "sense making" -- making sense of the context in which they operate. Sense making answers the question, "What's going on out there?" The best sense makers answer this question by creating a new map or story to help reframe a complex reality.

The protesters' map stands in direct contrast to "trickle down" economics and "too big to fail". It does not put banks, the economy, our trade policies with China, or even tax policy up front and center. It is not filled with statistics and analyses. Instead, "WE ARE THE 99%" simply loudly broadcasts that our current system is NOT WORKING for most Americans. It highlights the gross inequities that have left millions without homes, jobs, educations, and hope for their children while the 1% continues to gain. It is a mechanism to say "THIS IS NOT RIGHT and we are going to be reminding you of this every day and if you agree that the system is broken, come and join us".

Third, protest leaders have demonstrated effective inventing--creating innovative ways to carry the mobilization forward. They have found public spaces where people can come together to talk and support each other in a feeling, a cause, a sense that the rules have been rigged. Others are galvanizing new participants by getting the word out through social and traditional media. The result: meteoric viral contagion. Other OWS leaders are figuring out how to organize food, shelter, and logistics.

So far so good, but some leadership activities are missing. There is no clear vision for what a different future and economic model might look like. There is no set of stakeholders coming together across the aisle to commit to change. There is no clear structure or game plan for how to coordinate action and move forward. And protesters are angering some potential allies as they send incendiary messages using words like "evil" and "hate". Are these protests doomed to failure without these focusing, relating, and structuring activities?

There are signs of hope-depending on which side you are on. Already the OWS leaders have created a new frame and a petri dish for inventing. Perhaps this fertile field will result in other leaders stepping up to supply visions and solutions, and new networks will emerge. Perhaps a full-fledged movement will be born. There is some support for this view. Media attention and protest participation continue to grow. Politicians are suddenly joining the bandwagon as they see that the protesters have their fingers on the pulse of an American public fed up with the status quo. OCW by its very existence is forcing others to respond. There are also calls for collective action such as setting aside November 5th as a day for people to transfer their money from the large financial institutions to community banks and credit unions.

Although largely invisible, OWS leaders are there and they are making a difference. But the jury is still out. We will all have to wait to see if the OWS protest will become a true movement for change, or lynch-mob chaos, or fizzle into nothing at all.

Bio: Deborah Ancona is the Seley Distinguished Professor of Management; Professor of Organization Studies at the MIT Sloan School of Management; and director of the MIT Leadership Center. The opinions expressed in this commentary are solely those of the author.