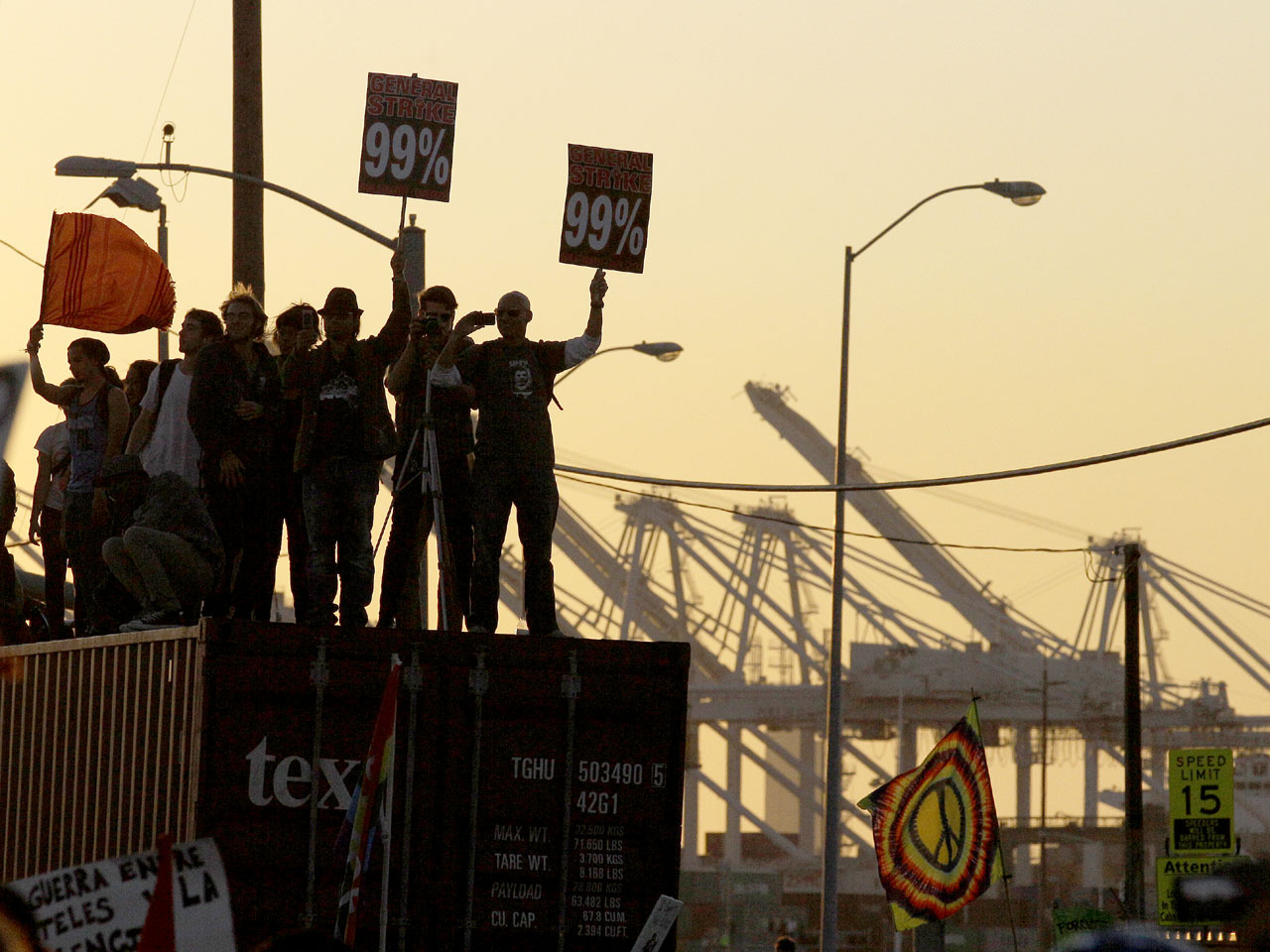 OAKLAND, Calif. - Several thousand Occupy Wall Street demonstrators gathering in Oakland forced a halt to operations at the nation's fifth busiest port Wednesday evening, escalating a movement whose tactics had largely been limited to marches, rallies and tent encampments since it began in September.

Police estimated that a crowd of about 3,000 had gathered at the Port of Oakland by about 5 p.m. PDT. Some had marched from the city's downtown, while others had been bused to the port.

Hours later the crowd began to dwindle and a voice on a bullhorn declared a victory for the movement, saying, "The port has been shut down. Let's head back to the plaza" downtown across from City Hall.

The announcement prompted a stream of demonstrators to also vacate the area, but many of the remaining protesters -- several hundred stalwarts -- stayed put, waiting for confirmation from port officials that overnight operations had also been halted.

Kos-Read said at around 9 p.m. that a decision had not yet been made on any additional shut downs, but trucks that had been idling were leaving the area. Officials had said earlier that they planned to re-open the port as soon as it was safe to do so.

The protest at the port had been peaceful and there was no police action or arrests, though authorities were on standby. Interim Oakland police chief Howard Jordan warned that protesters who went inside the port's gates would be committing a federal offense.

In Philadelphia, protesters were arrested earlier Wednesday as they held a sit-in at the headquarters of cable giant Comcast. Military veterans marched in uniform in New York, angry at their dim job prospects. And parents and their kids, some in strollers, formed a "children's brigade" to join the Oakland, Calif., rallies.

"There's absolutely something wrong with the system," said Jessica Medina, a single mother who attends school part time and works at an Oakland cafDe. "We need to change that."

In Los Angeles, New York and other cities, demonstrators held their own rallies in solidarity with the Oakland protesters, who called for Wednesday's "general strike" after the city became a rallying point last week when an Iraq War veteran was injured in clashes with police.

Protesters, city officials and business leaders were optimistic the strike would be peaceful, and there was little to no visible police presence all day.

Although windows at two bank branches and a Whole Foods store were broken and graffiti was painted inside one of the banks, officials described the protests as peaceful and orderly and said no arrests had been made.

"It is important to acknowledge the world is watching Oakland tonight," city administrator Deanna Santana said as demonstrators began to gather at the port. "And we need to ensure it remains a safe place for everyone."

Potentially minimizing any significant disruptions at the port, leaders of the longshoremen's union said they could not call for members to join the protests under their contract with the port.

Organizers say they want to stop the "flow of capital." The port sends goods primarily to Asia, including wine as well as rice, fruits and nuts, and handles imported electronics, apparel and manufacturing equipment, mostly from Asia, as well as cars and parts from Toyota, Honda, Nissan and Hyundai.

Craig Merrilees, spokesman for the International Longshore and Warehouse Union, said its members were not being called to strike, but that they supported the protesters.

The members "are supporting the concerns raised by Occupy Oakland and the Occupy movement to speak up for the 99 percent and against the corporate greed that is wrecking America," Merrilees said.

Elsewhere, police in Philadelphia arrested nine protesters who staged a sit-in inside the Comcast lobby. Officers handcuffed them and led into police vans as supporters cheered.

One protester, Bri Barton, said she was there because the gleaming Comcast tower represents excessive wealth in a city with many blighted neighborhoods. "It's hard for me to see this and that existing in the same city," she said.

In New York, about 100 military veterans marched in uniform and stopped in front of the New York Stock Exchange, standing in loose formation as police officers on scooters separated them from the entrance. On the other side was a lineup of NYPD horses carrying officers with nightsticks.

"We are marching to express support for our brother, (Iraq war veteran) Scott Olsen, who was injured in Oakland," said Jerry Bordeleau, a former Army specialist who served in Iraq through 2009.

The veterans were also angry that returned from war to find few job prospects.

"Wall Street corporations have played a big role in the wars in Iraq and Afghanistan," said Bordeleau, now a college student. He said private contractors have reaped big profits in those countries.

In Boston, college students and union workers marched on Bank of America offices, the Harvard Club and the Statehouse to protest the nation's burgeoning student debt crisis.

"There are so many students that are trying to get jobs and go on with their lives," said Sarvenaz Asasy of Boston, who joined the march after recently graduating with a master's degree and $60,000 in loan debt. "They've educated themselves and there are no jobs and we're paying tons of student loans. For what?"

The day's events in Oakland began with a rally outside City Hall that drew more than 3,000 people who spilled into the streets and disrupted the downtown commute. Protesters hung a large black banner that read: "Occupy Everything, DEATH TO CAPITALISM."

The crowd included students, families with young children and many people wearing labor union T-shirts. "Shut down the 1 percent. We are the 99 percent," they chanted.

Oakland let city workers use vacation or other paid time to take part, and officials said about 5 percent took the day off. About 360 Oakland teachers didn't show up for work, or roughly 18 percent of the district's 2,000 teachers, officials said. The district has been able to get substitute teachers for most classrooms, and where that wasn't possible children were sent to other classrooms, he said.

"I came here because the schools are in the (same) boat as everyone else," said Steve Neat, a fifth-grade teacher.

"We have five schools being closed here in Oakland. We have class sizes skyrocketing. We have cuts, cuts, cuts, just like everyone else. And the 1 percent, their share of the wealth is growing, and it's time for that to stop. It's time for some of that wealth to be shared out to all of society," he said.

Some protesters broke off from the rally to picket at nearby banks. All three banks located within blocks of the plaza were closed, though that didn't stop protesters from chanting and waving signs outside.

At a Citibank branch, more than a dozen protesters blocked the entrance, some with fake $100 bills taped across their faces. They held signs with messages such as "Share the Billions with the Millions." About 200 people chanted outside a Wells Fargo branch, where graffiti was scrawled on the wall. The messages read "The 1 percent won't back down" and "Who's robbing who?"

Further away from the rally, vandals shattered a Chase bank branch and splattered ink all over an ATM. Someone later taped a note to the shattered glass that read: "We are better than this. ... Sorry, the 99 percent."

In front of the Oakland Public Library, about three dozen parents brought toddlers and school-age children for a stroller march in a "children's brigade." Demonstrators handed out signs written as if in a children's crayon that read "Generation 99% Occupying Our Future." People attached the signs to their baby backpacks and their strollers.

By the time the group made its way to the main rally, it numbered about 200 adults with their children.

Like others, Marisol Curiel, an Oakland residents who brought her two sons, ages 2 and 4, in a double stroller, said there was a need to tax the wealthy to benefit families and schools and to make sure there are opportunities and jobs for children when they grow up.

"Normally I would be the type of person who would watch it from the sidelines," she said. "But being able to have a presence and also a chance to be more educated seemed really important. All of this will affect not just now, but our future."