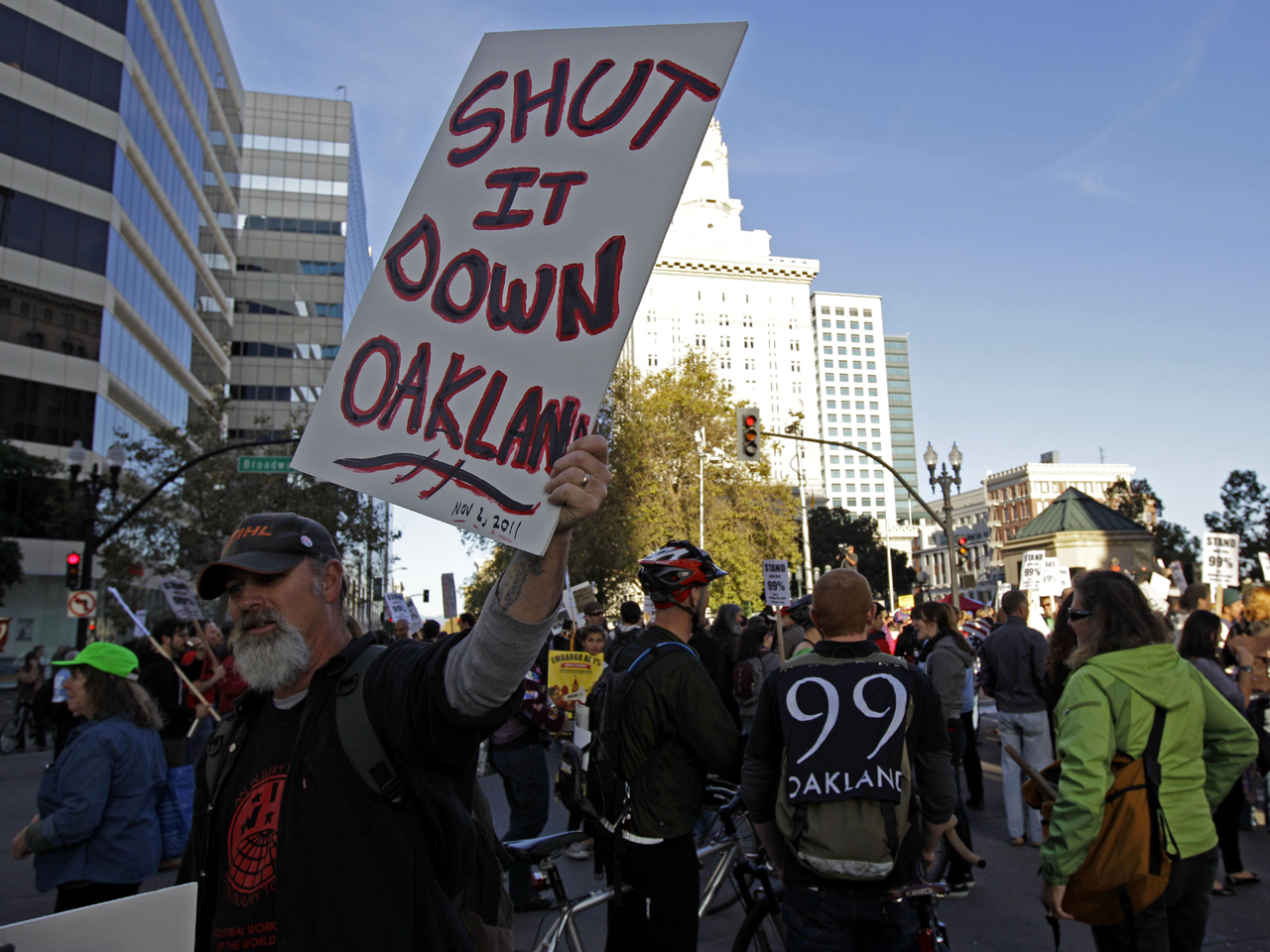 Economic inequality is the driving force behind the Occupy Wall Street protests. Oakland has become a flashpoint for the movement following violent clashes between protesters and police.

On Wednesday, organizers there called for a general strike, and an estimated 4,500 have marched on the city's busy port in an effort to shut it down.

Elsewhere, protesters were arrested as they held a sit-in at the headquarters of cable giant Comcast in Philadelphia. Military veterans marched in uniform in New York, angry at their dim job prospects. And parents and their kids, some in strollers, formed a "children's brigade" to join the Oakland, Calif. rallies.

CBS News correspondent John Blackstone reports that, just a week ago, riot police cleared protestors from the square in front of Oakland's city hall. But the tent city is back, and it's the focus for those who answered the call for a general strike.

Many in Oakland did stay away from work. The demonstrators call themselves members of the 99-percent and say they reflect a wide cross-section joined by one thing: A call for more economic equality.

"We have less and less resources. And we keep losing teachers and getting more students," Rosen-Tavasa said.

She says she is here for the 27 students in her class, the largest class she has ever taught.

"I am not getting paid anymore. In fact, my school day has increased from 3 hours to 6 hours," Rosen-Tavasa said.

In a long line of marchers heading toward a bank, Henry Noor said this is the biggest demonstration he's been part of since the sixties.

"What we're seeing is a waking up to all the economic injustices that have been going on for decades. Everybody knows it," Noor said. "People are finally speaking out and speaking some truth and I think you feel it in the air."

The air in Oakland last week was filled with tear gas as riot squads drove the Occupy protestors out of their encampment and battled them in the streets. One of the demonstrators - an Iraq was veteran named Scott Olsen - was badly injured. Olsen became a rally cry for other protesters.

One young marcher has come prepared, with goggles to protect him from the tear gas.

Louise Chegwidden came with her son Julian and husband Cliff. She says Oakland is the right city to give the occupy movement an energy burst.

"This is where we live out the great American melting pot experiment," Chegwidden said.

For now, there is a very light police presence in Oakland, but that could change as protests get louder and more active throughout the night.