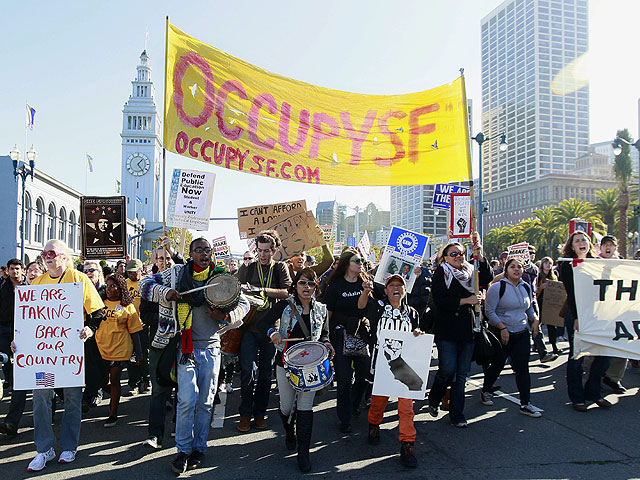 SAN FRANCISCO - Authorities early Thursday morning cleared an encampment set up by Occupy protesters on the campus of the University of California, Berkeley.

Police in riot gear conducted a raid on the encampment around 3:30 a.m. Thursday, removing about 20 tents and arresting two protesters. Television footage showed a bulldozer moving into the area after the raid.

More than 100 officers and sheriff's deputies from three agencies, including campus police, surrounded the 40 or so campers and gave them 10 minutes to gather their belongings and leave, the San Francisco Chronicle reports.

Two of the campers stayed behind, and there were reportedly no clashes with police, unlike Nov. 9 when police jabbed students with batons and arrested 40 people as the university sought to uphold the campus ban on camping.

Those arrested were identified as Alex Kim, 24, an English major, and Mike Porter, 24, who identified himself as an Occupy Oakland member.

"This size of force is entirely unnecessary," Ian Saxton, 29, a graduate student who tore down his tent before the raid, told the Chronicle. "Occupy Cal was a justified assembly by the students and community of UC Berkeley. This is what they do to students who exercise their First Amendment right?"

The encampment went up on Tuesday night in defiance of a campus ban on camping.

In New York, where police earlier this week cleared the protest encampment at Zuccotti Park, skirmishes broke out with police as hundreds of demonstrators marched through New York's financial district Thursday.

"All day, all week, shut down Wall Street!" the crowd chanted, clogging the streets near the stock exchange.

Police arrested several protesters who were sitting on the ground one block from Wall Street and refusing to move.

Some of the police hit protesters as they resisted arrest.

Demonstrators promised a national day of action with mass gatherings in other cities.

Elsewhere, anti-Wall Street activists swarmed into a San Francisco bank and tried to set up camp in the lobby.

About 100 demonstrators rushed into the Bank of America branch Wednesday, chanting "money for schools and education, not for banks and corporations."

Police in riot gear responded and began cuffing the activists one-by-one as other demonstrators surrounded the building, blocking entrances and exits.

After protesters had dispersed, police said 95 activists were arrested, taken to jail, cited and released.

No injuries were reported in the protest, one of several in the area focusing on school funding.

Willow Curless, 63, said she and her husband rode their bicycles from their home in Marin County and watched the protest from outside the bank.

"I honor these people in there," she said. "They're making an important statement for the 99 percent."

In Sacramento, about 75 student leaders and a few administrators from UC Berkeley and the University of California, Davis lobbied lawmakers and the governor to allocate more money to education.

"Come to our campuses and see how your actions affect us," he said. "I want you all to tell us why prisons deserve more spending than universities."

University of California President Mark Yudof issued a statement of support for the students' "passion and conviction" in support of public higher education.

"We also suffer together the strains caused by what has been a long pattern of state disinvestment in the University of California," he said.

The marches in support of higher education came as police in San Francisco and San Diego cleared encampments in those cities, citing public health and safety concerns.

San Francisco Mayor Ed Lee met with Occupy SF activists to let them know an expansion of their camp would not be tolerated.

"I did give the order to our police chief this morning that there cannot be an expansion of what we're perceiving to be a health hazard in the city," Lee said after the meeting.

Police once again broke up the Occupy encampment in San Diego that officials said posed a growing problem with violence and mounting trash.

Nine people were arrested and one other was cited and released during the 2 a.m. raid.

Another Occupy protest is planned Thursday in San Francisco.