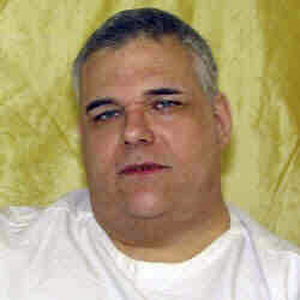 (AP) COLUMBUS, Ohio — A condemned Ohio inmate who weighs 480 pounds and has a history of difficulty losing weight argues he would face a "torturous and lingering death" if executed in January.

Ronald Post, who shot and killed a hotel clerk in northern Ohio almost 30 years ago, said his weight, vein access, scar tissue, depression and other medical problems raise the likelihood his executioners would encounter severe problems. He's also so big that the execution gurney might not hold him, lawyers for Post said in federal court papers filed Friday.

"Indeed, given his unique physical and medical condition there is a substantial risk that any attempt to execute him will result in serious physical and psychological pain to him, as well as an execution involving a torturous and lingering death," the filing said.

A spokeswoman for the prisons department had no comment on the pending litigation.

Post's attorneys also want more time to pursue arguments that claims of a full confession by the inmate to several people have been falsely exaggerated.

"Post's case is about more than his weight, and his life should be spared for reasons wholly unrelated to his obesity," his federal public defender, Joseph Wilhelm, said in a statement.

Inmates' weight has come up previously in death penalty cases in Ohio and elsewhere.

In 2008, federal courts rejected arguments by condemned double-killer Richard Cooey that he was too obese to die by injection. Cooey's attorneys had argued that prison food and limited opportunities to exercise contributed to a weight problem that would make it difficult for the execution team to find a viable vein for lethal injection.

In 2007, it took Ohio executioners about two hours to insert IVs into the veins of condemned inmate Christopher Newton, who weighed about 265 pounds. A prison spokeswoman at the time said his size was an issue.

In 1994 in Washington state, a federal judge upheld the conviction of Mitchell Rupe, but agreed with Rupe's contention that at more than 400 pounds, he was too heavy to hang because of the risk of decapitation. Rupe argued that hanging would constitute cruel and unusual punishment.

After numerous court rulings and a third trial, Rupe was eventually sentenced to life in prison, where he died in 2006.

Ohio executes inmates with a single dose of pentobarbital, usually injected through the arms.

Medical personnel have had a hard time inserting IVs into Post's arms, according to the court filing. Four years ago, an Ohio State University medical center nurse needed three attempts to insert an IV into Post's left arm, the lawyers wrote.

Post has tried losing weight, but knee and back problems have made it difficult to exercise, according to his court filing.

Post's request for gastric bypass surgery has been denied, he's been encouraged not to walk because he's at risk for falling, and severe depression has contributed to his inability to limit how much he eats, his filing said.

While at the Mansfield Correctional Institution, Post "used that prison's exercise bike until it broke under his weight," according to the filing.