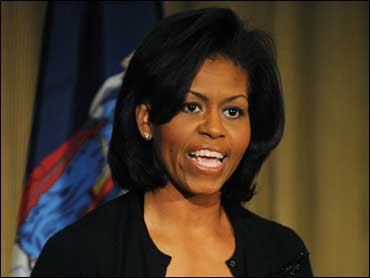 Recalling his past work as a community organizer to help struggling families, Michelle Obama said he would take the same approach as president.

"Barack believes that we must fight for the world as it should be, a world where together we work to reverse discriminatory laws," she said at a Manhattan fundraiser for the Democratic National Committee's Gay and Lesbian Leadership Council.

Michelle Obama also drew a connection between the struggles for gay rights and civil rights.

"We are all only here because of those who marched and bled and died, from Selma to Stonewall, in the pursuit of a more perfect union," she said at the event, held days before the anniversary of the 1969 Stonewall riots between gays and New York police, and the city's annual gay pride parade.

"The world as it is should be one that rejects discrimination of all kinds," she said.

Touting her husband's record pushing for workplace discrimination legislation as an Illinois state senator and his support of civil unions, Obama noted her husband also had brought a call for equality to conservative groups, telling churchgoers they need to combat homophobia in the black community.

The Illinois senator opposes a constitutional amendment to ban gay marriage and says states should make their own decisions on the matter. He has said he's interested in ensuring that same-sex couples in civil unions get federal benefits.

Michelle Obama's speech brought a standing ovation from the crowd of about 200 donors, who raised about $1.3 million, organizers said.

Earlier Thursday, she spoke in Manchester, N.H., and credited Hillary Rodham Clinton, her husband's rival for the Democratic nomination, with bringing the concerns of working families to the forefront of the presidential campaign.

She heard from New Hampshire women juggling such work and family concerns as child care and caring for aging parents. She explained her husband's plans to expand sick time and paid family leave, help parents afford child care and make sure women get equal pay for equal work.

"We are closer to this America than ever before, and that's because of an extraordinary woman who's not in this room but she's traveling with my husband tomorrow, and that woman is Hillary Clinton," Michelle Obama said to sustained applause.

"I know that the folks here in New Hampshire know this better than anyone because you got to know the candidates up close and personal, but because of Hillary Clinton's work the issues of importance to women and working families are front and center."

Clinton and Barack Obama are to make their first public joint appearance Friday in Unity, N.H.