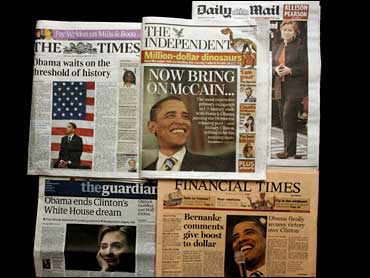 Barack Obama's triumph over Hillary Clinton triggered jubilation among his relatives in Kenya, hope among people around the world - and a few questions about what he actually stands for.

Many expressed optimism Wednesday that a November victory by Obama - who has relatives in Africa and childhood friends in Asia - would mark a major shift from the deeply unpopular policies of the Bush administration.

In Kenya, home to Obama's family on his father's side, the Kenya Times newspaper devoted its front page to the story, under the headline "Obama makes history."

"I've just watched him on television, and as a family we are very happy. Really, it is something that is a trendsetter," the politician's uncle, Said Obama, told The Associated Press from the port city of Kisumu in western Kenya.

In Mexico City, hairdresser Susan Mendoza's eyes lit up when she learned Obama had clinched the nomination.

"Bush was for the elite. Obama is of the people," she said.

The excitement was less about Obama's foreign policy - which remains vague - than a sense that his victory marks a historic moment.

Michael Cox, a professor of international relations at the London School of Economics, said Obama's win "has sent out a lot of positive signals around the world."

"He has a very appealing persona - elegant, fluent, strings lots of sentences together into paragraphs," Cox said. "But in terms of (his) actual policies towards the Middle East, Iraq, Iran, China, Europe - actually, we don't know."

That uncertainty did little to dampen enthusiasm for Obama.

Jean-Marc Damier a 39-year-old man from the Paris suburbs who works in marketing, said Obama's relative lack of experience could be an asset.

"The candidate's freshness can only do good, because the way things have been done before created a mess," he said.

The Times of London, which proclaimed in a headline that "Obama waits on the threshold of history," said in an editorial that Obama's campaign "has rekindled America's faith in its prodigious powers of reinvention - and the world's admiration for America."

The respected Dutch daily NRC Handelsblad said Obama's nomination was "a historical event even if he does not become president in the end." It said Obama had overcome racism and "represents a new generation born after the baby boom."

France's Le Monde said Obama's grassroots campaign, which attracted thousands of young supporters, "demonstrated that American democracy is not doomed to being confiscated by a narrow political class, financed by lobbies and piloted by communication experts."

Obama opposed the invasion of Iraq and has called for an early troop withdrawal. He also has shown willingness to engage in dialogue with Iran, North Korea and Cuba - nations long isolated by the policies of Bush.

Jorge Serguera, a 70-year-old retiree in Havana, said he thought that, if elected, Obama would work to loosen Washington's nearly 50-year-old trade embargo against Cuba. Obama is "a thinking man of ethics and ideals," he said. "Bush's leaving will let Cuba rest a bit after eight years."

Ngo Van Hung, a Vietnamese real-estate salesman, said Obama "seems to be a peace lover. He would have a better understanding of how to treat people of different nationalities and different countries."

Many Asians welcomed the selection of a candidate perceived as more aware of the world outside U.S. borders than Bush. The son of a Kenyan father and a mother from the U.S. state of Kansas, Obama spent several years of his childhood in Jakarta, Indonesia.

Indonesians were rooting Wednesday for the man they consider to be a hometown hero. Obama lived in the predominantly Muslim nation from age 6 to 10 with his mother and Indonesian stepfather and was fondly remembered by former teachers and classmates.

"He was an average student, but very active," said Widianto Hendro Cahyono, 48, who was in the same third grade class as Obama at SDN Menteng elementary school in Jakarta. "He would play ball during recess until he was dripping with sweat.

"I never imagined he would become a great man."

A Chinese scholar said that while he did not expect major changes in U.S. foreign policy, an Obama White House would have a very different tone from a Bush one.

"He will bring new energy into America's domestic politics and foreign policies," said Zhu Feng, deputy director at the Center of International and Strategic Studies at Peking University in Beijing. "It's a good choice for the Democrats."

However, Obama has made himself unpopular in Pakistan by saying the United States should act alone on information about terrorist targets within the country's national borders, leading some to believe he will be worse for the country than Bush.

"Obama has threatened attacks against us even before becoming the president, and he will be more dangerous compared to Bush," said Ibrar Ahmad, 34, a lecturer at the Government College in Multan.

And in the Middle East, there was skepticism that an Obama presidency would change an American foreign policy viewed by most Muslims as staunchly pro-Israel.

Obama reinforced that view in a speech to Jewish leaders in Washington Wednesday, saying that "as president I will never compromise when it comes to Israel's security."

"The upcoming president, whether he is black or white, would have the same policy," said Tarek Abdullah, an Egyptian store vendor. "Their Middle East policy and their policies towards Muslims in general will always be the same."