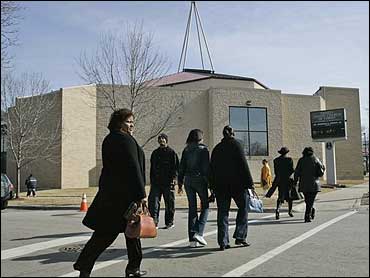 A then 26-year-old Barack Obama walked down the aisle of Chicago's Trinity United Church of Christ, knelt beneath a cross suspended from its rafters and, as he later explained it, committed himself to God after years as a religious skeptic.

In those early days at the self-described "unashamedly black" church, the future Democratic presidential candidate was moved to tears by a sermon from its activist pastor, the Rev. Jeremiah Wright Jr., whom he has portrayed as his spiritual mentor.

Two decades later, Obama himself would be Wright's topic of the day — but not for reasons either man would have hoped.

At a recent Sunday service, following media coverage of Obama's last-minute decision not to have Wright speak at the senator's presidential announcement last month, Wright warned his flock not to believe any reports of a rift between him and the church's best-known member.

"Barack and I are fine," Wright, 65, on an out-of-state trip, said in a recorded message played to about 2,000 attendees. "The press is not to be trusted. ... Don't let somebody outside our camp divide us."

The erudite if blunt-speaking pastor also said Obama had apologized for withdrawing the invitation to speak at the Feb. 10 announcement in Springfield.

Obama had taken "some bad advice from some of his own campaign people who thought it would not be a good idea for me to be in front of the cameras on the day he announced," Wright said, adding that he and Obama had "moved on." Wright attended the announcement, but he did not speak.

His impassioned comments came after some conservatives questioned Obama's links to Trinity, which embraces what it calls a "Black Value System." Others criticized Obama for appearing to distance himself from the church and its leader.

"The senator appreciates the continued prayers of his pastor," Burton said, adding in a statement that the invitation to Wright was withdrawn because Obama wanted to "avoid having statements and beliefs being used out of context and forcing the entire church to defend itself."

But in an interview with PBS's "Religion & Ethics Newsweekly" recorded just before Obama's February announcement, Wright said he warned the senator that their association could pose political problems, partly because of his history of supporting Palestinian causes.

Wright also told The New York Times in an interview published March 6: "When his (Obama's) enemies find out that in 1984 I went to Tripoli" with Nation of Islam leader Louis Farrakhan to visit Libyan leader Moammar Gadhafi, "a lot of his Jewish support will dry up quicker than a snowball in hell."

The roughly 8,000-member church has often championed liberal causes, from gay rights to opposition to the Iraq war. It also emphasizes its African roots and asks parishioners to accept the "Black Value System," which includes tenets such as "commitment to the black family," "dedication to the pursuit of education" and one critics have seized upon - "disavowal of the pursuit of 'middleclassness."'

Obama seemed to preach some of the church's teachings earlier this month at a commemoration of the 1965 civil rights march in Selma, Ala. He said his generation of blacks needs to strive for something beyond getting "some of that Oprah money" and that "materialism alone will not fulfill the possibilities of your existence."

At Trinity's lively, music-oriented services, some members wear African-style dress. A red, black and green flag of the pan-African movement stands by the pulpit. On a nearby plaque, Trinity's motto reads, "Unashamedly Black and Unapologetically Christian."

For nearly two decades, Obama has identified strongly with Trinity and hasn't been shy about discussing his closeness to its pastor.

Wright's use of "audacity of hope" in one sermon inspired Obama to borrow those words as the title of his best-selling book, "The Audacity of Hope."

In an earlier memoir, "Dreams From My Father," Obama also tells how he was moved to tears during that sermon by Wright, an early proponent of the black liberation and black theology movements that gained ground in the 1960s.

Obama describes what he calls "a forceful wind carrying the reverend's voice up into the rafters" and how he "felt for the first time how that spirit carried within it, nascent, incomplete, the possibility of moving beyond our narrow dreams."

The son of a white mother from Kansas, who was skeptical of organized religion, and a Kenyan father, Obama was raised in a secular household. He spent part of his childhood in Indonesia, where he attended a Catholic school and a public school where he took Islamic religion classes.

He explained how his spiritual journey culminated that day he walked toward the altar at Trinity in a 2006 article on the United Church of Christ's Web site, writing that as he knelt beneath that cross, "I submitted myself to (God's) will and dedicated myself to discovering His truth."

He added that he was drawn to activist churches like Trinity because, in them, "I was able to see faith as more than just a comfort to the weary or a hedge against death, but rather as an active, palpable agent in the world."

Trinity's critics, though, say it emphasizes black causes to a fault.

Fran Eaton, who writes for the conservative blog Illinois Review, singled out Trinity's 12-point value system, which includes a commitment to "pledge allegiance to all black leadership who espouse and embrace the Black Value System."

"I would feel uncomfortable with a church that used the word 'white' instead of 'black' when it talked about these things," she said. "It seems to me we are going backward if we're basing our churches and the help they give on skin color."

Melissa Harris-Lacewell, a politics and African studies professor at Princeton University and an Obama supporter who attended Trinity when she lived in Chicago, dismisses such criticism, saying it only shows "most white Americans, most of the time, can be utterly ignorant of how black people worship on Sunday."