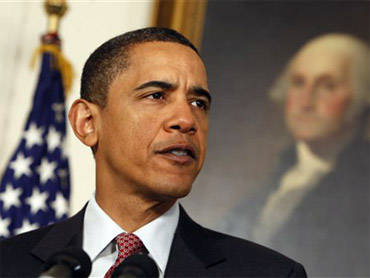 (AP Photo/Charles Dharapak)
Job creation will be a centerpiece of President Obama's State of the Union address tonight, according to administration officials.

Specifically, he will call for the elimination of capital gains taxes on small business investment and push for tax credits for both new hiring and investments in new equipment.

"What you will hear the president discuss tonight, for about two-thirds of this speech are the circumstances that our economy is in, and his way forward to getting our economy moving again," White House Press Secretary Robert Gibbs told CBS' "The Early Show."

The new emphasis comes as the administration's agenda and his party's success in 2008 elections have been threatened recently by the Republican pick up of their 41st senate seat with the Scott Brown win in Massachusetts, resulting in a newly emboldened Republican party.

Coupled with a handful of Democratic Senate retirements, Republicans are poised to pick up numerous Senate seats and are pressuring Democrats in dozens of House seats in the fall midterm elections. With Mr. Obama's approval ratings hovering around 50 percent, opposition to his agenda is stronger than at any point in his presidency.

Thus, Wednesday's State of the Union will be a bold attempt to reset his administration's course, re-invigorate the Democratic party and convince voters that the White House and congressional Democrats are focused on what issues matter most to middle class voters, namely jobs and the economy.

To that end, the new push for jobs will be highlighted by a campaign style presidential visit to Florida on Thursday and a trip to New Hampshire next week. The Florida visit will emphasize a new $8 billion high-speed rail development program, paid for with stimulus act funds, that the White House sees as a jobs program.

Other themes of the State of the Union will include a push for reigning in exploding debt and deficits, including a temporary freeze in some domestic spending. The president will also announce his intentions to appoint a panel to study ways to reduce the deficit. (Yesterday, the Senate voted down creation of a similar panel)

The Congressional Budget Office says the deficit this year will be $1.3 trillion and calls the fiscal outlook for the country "bleak." According to many polls, voters are worried about the run-away spending in Washington and Mr. Obama is trying to take steps to slow, if not reverse, the growth of government spending.

Additionally, the president will discuss the terrorist threat, talk about the politically sensitive issue of allowing gays to serve openly in the military, and call for pay freezes for top administration officials.

"Health care will play a role in this speech just as a number of topics will in creating an economic foundation for our future," said Gibbs.

On top of all of that, Mr. Obama will push for reforms and new spending in education. He will talk about "his plan to improve outcomes for students at every point along the educational pipeline," according to a senior administration official.

The official said that some programs will be consolidated, but that "a 6.2% increase for the Department of Education will show a significant effort to help fund the Administration's new reform efforts."

Join CBSNews.com for coverage of President Obama's State Of The Union address on Wednesday, Jan. 27, from 8 p.m. to 11:15 p.m. ET, where you can engage directly with CBS News reporters and other viewers in a truly interactive experience. Click here for more information.