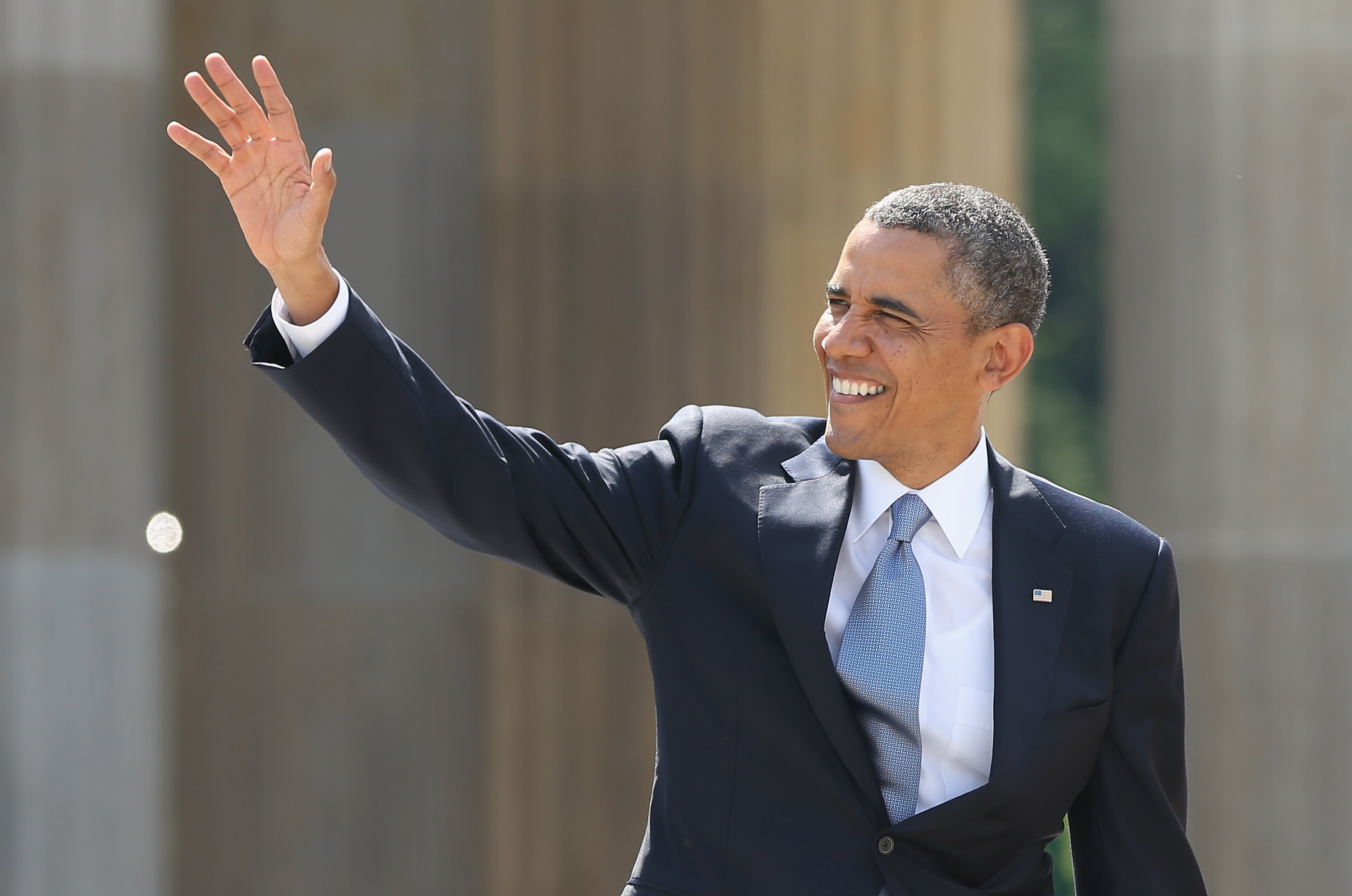 President Obama arrived here to recapture some of his 2008 magic.

But the 200,000 Berliners who flocked to his speech at the Tiergarten back then will see a different American leader this time than the one they imagined on a sun-splashed day when hundreds literally sprinted toward the Victory Statue for a prime vantage point to behold a transformative, post-Bush presidential candidate Europe could adore.

They now see a surveillance-happy, drone-wielding president as hell-bent and frothy about protecting American safety as George W. Bush was. German Chancellor Angela Merkel will grill Obama on National Security Agency data mining and phone tracking, tactics some politicians here have compared with those of the despised East German secret police.

Europeans also see a free-trader pressuring the French to bow before the altar of low tariffs in pursuit of a U.S. and European trade pact.

Just last week, White House officials feared they wouldn't even be able to announce the beginning of trade talks at the G-8 Summit at the Lough Erne golf resort in Northern Ireland. Under sustained pressure from British Prime Minister David Cameron, the French relented and agreed to start the talks next month in Washington--essentially saving their disagreements over protecting the French movie and video industry for the bargaining table. Economically fragile France had little choice but to cave to the United Kingdom and the United States (another Bushian echo?).

Cameron and Obama both need job growth fueled by exports. The eurozone needs an economic life raft, as it remains mired in recession (Spain's unemployment rate is 27 percent). And trade, while not a full elixir, is the freshest idea after decades of mildewy government stimulus and a recent spasm of parched austerity.

But one more word on global trade--and it may be the biggest unwritten story in years.

The concept of global trade governed by the World Trade Organization is dead. Nations and regions are now slicing up the globe with more-intimate trade deals based on sovereign borders, economic interests, and political realities.

It's worth noting that the big world traders have been tilting at the windmill of a global free-trade system since 2001. That's when the Doha Round of global trade talks began--and it is still nominally in (feeble) pursuit of a goal that has already been ignored. But the WTO's primary function now is just to count and passively administer (the way a vice principal administers a third-grade classroom) the multitude of regional and mini-bloc trade deals.

Now, on to Syria and the Obama-Putin drama. Of course, Putin rejected all of Obama's appeals to coax Syrian dictator Bashar al-Assad out of power. Putin doesn't do coaxing. And he doesn't turn his back on strongmen who pay cash for heavy weaponry. And he doesn't want to give any hint that armed rebels have any legitimacy against Assad--not months away from the Sochi Winter Olympics, for which Putin's entire security and intelligence apparatus is mobilizing to thwart feared Chechen terrorist attacks.

Obama wants a political solution to Syria but doesn't want to throw the U.S. into the middle of a Sunni-Shia conflict. He's cool to a no-fly zone and even cooler to inserting heavy weapons into the conflict. As he told my CBS colleague, Charlie Rose, until a critic is in the Situation Room, they don't know diddly about Syria.

There is an immobilized rationality to all of this. Obama knows exactly what he doesn't want to do. Assad, as all dictators do, knows precisely what he wants to do, and after a year of losing ground to the disorganized and poorly armed rebels, is now regaining terrain and political clout to counter U.S. and Western pressure to step down. In this, he has a tactical admirer in Putin.

That's why the biggest news on Syria in the past week hasn't been about the chemical sarin killing upward of 150 out of 93,000 casualties, or the unspecified and unscheduled promise of some U.S. military aid to some rebel groups. The biggest news is that Obama is willing to let many of Assad's government institutions and its Alawite functionaries stay--as long as Assad goes. They can even negotiate for their future power structure with the rebels at an as-yet unscheduled peace conference in Geneva.

"The fundamental view expressed by Russia is not that this is all about Assad," Deputy National Security Adviser Ben Rhodes said Monday. "To them, it's all about having a stable outcome. So in terms of who comes to the table, that type of discussion, it's certainly the case that you could [in Geneva] have empowered representatives of the regime."

Obama arrives here less the rock star and more the battle-hardened pragmatist. On trade, he still has the leverage of a global economic power with the upper hand on Europe. On Syria, he presides over a war-weary nation ill-prepared to back a military confrontation with the zealous Assad or his client-state arms supplier, Putin.

In all cases, raw power governs and limits--and must be shaped and reshaped as circumstances, cunning, and daring allow. Such is not the stuff of sun-kissed summer afternoons in the Tiergarten in 2008 or the notion that a U.S. president can fancifully or effortlessly remake the world. It's time Berlin and the rest of Europe woke up to that reality.