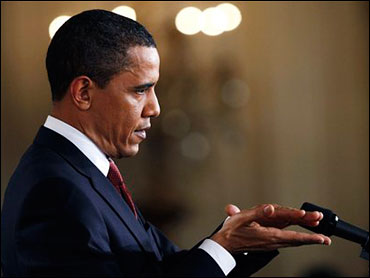 (AP Photo)
During his prime-time news conference President Obama said, "That whole philosophy of persistence, by the way, is one that I'm going to be emphasizing again and again in the months and years to come as long as I'm in this office. I'm a big believer in persistence."

He amply demonstrated his "philosophy of persistence" in responding to many of the 13 questions from the pre-selected group of White House reporters with the refrain that reforming health care, energy policy and education, and adopting his $3.6 trillion budget, will save America from economic disaster.

Between his opening remarks and answers to questions, Obama mentioned "health care" about 30 times.

"I think that when it comes to domestic affairs, if we keep on working at it, if we acknowledge that we make mistakes sometimes, and that we don't always have the right answer, and we're inheriting very knotty problems, that we can pass health care, we can find better solutions to our energy challenges, we can teach our children more effectively, we can deal with a very real budget crisis that is not fully dealt with in my, in my budget at this point, but makes progress," he said during the question period.

The persistence of his efforts on fixing the economy paid off this week, he claimed, citing the toxic asset clean up plan introduced Monday by Treasury Secretary Tim Geithner.

"I think, when it comes to the banking system, you know, it was just a few days ago or weeks ago where people were certain that Secretary Geithner couldn't deliver a plan. Today, the headlines all look like, well, all right, there's a plan. And I'm sure there will be more criticism, and we'll have to make more adjustments, but we're moving in the right direction."

Persistence is a philosophy that any president follows as they settle on a strategy and then try to sell it to Congress and the American people. That said, in his first 64 days, Obama has been the Energizer bunny, promoting his policies on many fronts, from press conferences to Jay Leno. He is the persistent campaigner-in-chief.

On Thursday, the president is holding an online town hall on the economy to continue selling his recovery plan beyond Capitol Hill. But he still has a long way to go to get Congress to go along with his budget.

In his opening remarks, Obama said that his "budget is inseparable from this recovery... because it is what lays the foundation for a secure and lasting prosperity."

He allowed that he is open to an alternative budget but it hasn't been offered. The Republicans and some of his own party will expect significant changes in the budget proposal, such as on taxes. In an example over-rotation, Sen. Judd Gregg, R-N.H., a former Obama pick for Commerce Secretary, described the Obama budget earlier this week as akin to a "banana republic" fiscal policy.

Obama acknowledged that success with his economic agenda will be difficult, and made the call for national unity. "The road to that prosperity is still long, and we will hit our share of bumps and setbacks before it ends. But we must remember that we can get there if we travel that road as one nation, as one people."

He seems to believe that his persistence, relentlessness and intellectual grasp of complex issues will save the day. The danger is that persistence can turn into stubbornness, and we've seen that act before. Changing the way Washington works — another of Obama's almost robotic refrains — and surviving the economic tsunami will require a combination of persistence and pragmatism. If Obama can get behind the $410 billion spending bill with its earmarks, he should be able to stomach the "ugly" compromises necessary to get his ambitious budget through Congress.

Daniel Farber is Editor-in-Chief of CBSNews.com