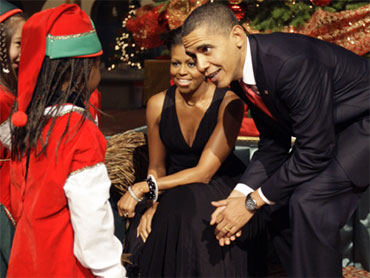 The nation's capital got in the holiday spirit Sunday night when music legends Neil Diamond and Mary J. Blige performed for President Barack Obama at the annual "Christmas in Washington" concert.

"This season we celebrate that sacred moment, the birth of a child, the message of love preached to the world," Obama said from the stage, where he was joined by first lady Michelle Obama. "More than 2,000 years later, that spirit still inspires us."

The president spoke of helping those in need during the holidays, as well as honoring those in the military.

"With our men and women in uniform serving far from home, in harm's way, our fervent wish remains this season, and all seasons: Let there be peace on earth," he said.

Diamond kicked off the concert by performing "Joy to the World" and "Winter Wonderland." Blige wowed the crowd with "The Christmas Song (Chestnuts Roasting on an Open Fire)."

After addressing the crowd, the Obamas stayed on stage with all the performers to sing carols, starting with "Hark, the Herald Angels Sing." The president wiped a tear from his eye during the sing-along.