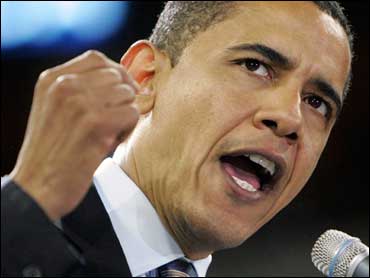 This column was written by Tom Hayden.

In his victory speech in Texas Tuesday, Barack Obama promised to end the Iraq war in 2009, a new commitment that parallels recent opinion pieces in The Nation.

Prior to his Houston remarks, Obama's previous position favored an American combat troop withdrawal over a sixteen-to-eighteen-month timeframe. He has been less specific on the number and mission of any advisers he would leave behind.

Ending the war in the first year of his potential presidency, therefore, is the strongest stand Obama has taken thus far, and one he will be questioned on sharply by the Republicans and the media. As Juan Cole noted last year, the Bush-Cheney team is preparing a "poison pill" of disorder and blame for any future President contemplating an Iraq troop withdrawal.

Did Obama mean it? Was it only rhetoric? Perhaps, but as Obama has said over and over lately, words make a difference. He may be asked to square his 2009 goal with his previous eighteen-month timetable. To avoid inconsistencies or missteps, he might claim that he will publicly declare in 2009 that he is ending the occupation but bringing the troops home on his longer timetable. Who knows? But these were words worth holding the candidate to. The astonishing thing is that antiwar sentiment among Obama's base is running strongly enough to push the candidate forward to a stronger commitment. By comparison, in "The Audacity of Hope" (2006), Obama wrote that "how quickly a complete withdrawal can be accomplished is a matter of imperfect judgment based on a series of best guesses."

The Iraq war, and the so-called war on terrorism, are now guaranteed to loom large in the likely battle between Obama and John McCain. The American experience, first with Vietnam and now with Iraq, provides a strong reservoir of support for Obama's skeptical position from 2002 until the present time. But McCain's personal experience as a tough Navy pilot and prisoner of war makes him much more formidable than Hillary Clinton as a "national security" advocate against Obama. McCain's remarks Tuesday were focused entirely on Obama's lack of experience in foreign affairs, and should be a wake-up call to the peace movement to become more engaged in the presidential election.

Obama faces two immediate tests aside from the primary contests ahead. First, sometime in April, General David Petraeus will be testifying in Washington that the conditions are improving in Iraq and that the United States must "stay the course." Petraeus will be acting as a de facto surrogate for McCain in domestic politics. Obama will have to respond to the general's serious claims without retreating from the commitment he has given to early withdrawal.

Second, the questions of Afghanistan, Iran and Pakistan could intensify as a symbol of America's current policies towards terrorism. McCain has already absorbed both neoconservative doctrines and the neoconservatives themselves in his campaign against "Islamo-fascism" as the greatest threat in American history.

First, the neoconservatives will push for Obama's (and the Democrats') acceptance of their terminology to control the debate, or berate their opponents as weak for not recognizing "Islamo-fascism" as the new equivalent of the Communist threat during the cold war.

Next, they will attack Obama for proposing to pull the plug on Iraq just when the tide is turning.

Finally, they will question Obama's experience in pushing for diplomacy towards Iran, and draw him out on why he favors more troops in Afghanistan and a pre-emptive strike against Pakistan if there is "actionable intelligence." They will probe, too, into Obama's commitment to Israel.

It will be messy and ugly, with right-wingnuts calling Obama by his middle name as often as possible.

Weeks before Obama became the front-runner, The New York Times hired William Kristol as another in-house neoconservative, as Kristol was blasting the Democratic Party for becoming "the puppet of the antiwar groups." The Times's own "objective" news commentary adopted the right-wing frame that the Democrats would "seem unpatriotic" by cutting funds for American troops while "under intense pressure from the antiwar faction [read: majority] of their party." Wedge politics virtually dictates that splintering the Obama campaign, the Democrats and the antiwar movement, while uniting the right and center around "experience," will be the strategic agenda for Republicans through November. If he is not the vice-presidential candidate, Joe Lieberman will be employed as the primary ally of the Republicans in trying to make inroads into the American Jewish community as well.

But there are Republican weaknesses to expose too, beginning with their attempt to perpetuate an endless trillion-dollar war in Iraq. MoveOn and others will strike hard at that Republican vulnerability. According to counterinsurgency doctrine, the current Iraq war is expected to last throughout the next presidential term, longer than most Americans can imagine supporting it. On Iran, the recent National Intelligence Estimate has dampened any White House plans for an American strike, though the Israelis may act as a dangerous surrogate before December.

Then there is the quagmire of Afghanistan, where no military solution is in sight. And finally, in Pakistan, $11 billion invested in the Musharraf regime was swept away by the voters yesterday. The Pakistanis do not want to be pawns in the American war on terrorism. They know that a military fight with the Taliban or Al Qaeda is also a bottomless battle against Pashtun nationalism with implications for Pakistan's stability as a whole.

The danger for Obama lies in being challenged by McCain, the neoconservatives and the right-wing conservatives to prove his credentials as a militarist or face being painted as another Democrat too weak to be Commander-in-Chief.

The opportunity for the peace movement is to engage in open political and intellectual battle, from precincts to public forums, against the neoconservative agenda for a permanent war against Muslim radicals and on behalf of American access to oil with dire consequences at home.
By Tom Hayden
Reprinted with permission from The Nation