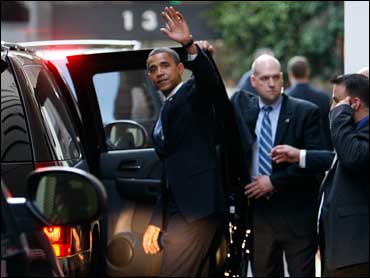 Barack Obama partied with Hollywood celebrities Tuesday night and with the help of Oscar-winning singer and actress Barbra Streisand raised an eye-popping $9 million for his presidential campaign and the Democratic Party.

The night was split into two glitzy events, a reception and dinner costing $28,500 each at the Greystone Mansion, followed by entertainment by Streisand at the nearby Regent Beverly Wilshire Hotel. About 250-300 people were expected at the dinner and about 800 at the entertainment, which cost $2,500 a ticket.

Obama took a subdued approach at the fundraisers, reports CBS News' Maria Gavrilovic. "This should be a celebratory evening, we've got 48 days to go in a campaign, a campaign that started 19 months ago, at a time when a lot of folks thought we might not get here," Obama said at the Beverly Wilshire Hotel but he added, "I'm not in a celebratory mood." (Read more of Gavrilovic's report.)

Obama spent more than an hour before dinner getting his picture taken with guests. He said later that people had encouraged him to be tougher and had questioned why he was so calm in a close race against Republican John McCain.

"If we can cut through the nonsense and the lipstick and the pigs and the silliness, then I'm absolutely convinced that we are going to win," Obama said, referring to some of the offbeat charges raised against him.

"The reason I'm calm ... is I've got confidence in the American people," he said. "I really think they want to see us do better." Standing in the courtyard of the palatial estate, he said his campaign was dedicated to people who need jobs and health care and worry about their pensions and sending children to college.

"It's about those who will never see the inside of a building like this," Obama said.

He said the economic turmoil in recent days had been sobering for America. "It's reminded people that this is not a game. This is not a reality show, no offense to any of you," Obama said to laughter. "This is not a sitcom."

It was a day of contrasts for Obama. Earlier in the day, the Democratic presidential candidate spoke about the public's deepening economic anxieties and portrayed McCain as out of touch with the needs of hardworking people.

Then he flew to California for a night of hobnobbing with Hollywood notables.

McCain groused about Obama mixing it up with celebrities. He told a rally in Vienna, Ohio on Tuesday that Obama "talks about siding with the people, siding with the people just before he flies off to Hollywood for a fundraiser with Barbra Streisand and his celebrity friends. Let me tell you my friends, there's no place I'd rather be than here with the working men and women of Ohio."

A night earlier, McCain was with deep-pocketed donors in Florida and raised $5 million, a fact noted by Obama's campaign.

"I don't know who showed up down in Florida where he raised $5 million but my guess is that it wasn't a lot of nurses, firefighters and police officers," Obama's senior strategist, David Axelrod, told reporters. "The whole corporate lobbying community is rallying to his side. We're going to have to struggle to keep pace. You can't challenge that group and not expect them to have a lot of money."

While the final total was not determined, Obama's campaign did not dispute estimates that the twin events would bring in $9 million for Obama and the Democratic Party. That would be his second-biggest, fundraising day. Obama received $10 million from online donors the day after McCain's running mate, Alaska Gov. Sarah Palin, delivered her speech at the Republican convention.

On another big fundraising night in California, Obama raised $7 million in August in San Francisco.

Obama is financing his presidential race with private contributions after abandoning a pledge to take public financing capped at $84 million. His campaign announced Sunday it had collected $66 million in August, a fundraising record for any presidential candidate in a monthlong period.

By comparison, McCain raised $47 million in August, a personal best for his campaign as well. After claiming the GOP nomination, McCain accepted the $84 million in taxpayer funds allotted by the public financing system for the race.

Pence postpones South Carolina trip because daughter is in labor
Thanks for reading CBS NEWS.
Create your free account or log in
for more features.
View CBS News In
CBS News App Open
Chrome Safari Continue
Be the first to know
Get browser notifications for breaking news, live events, and exclusive reporting.