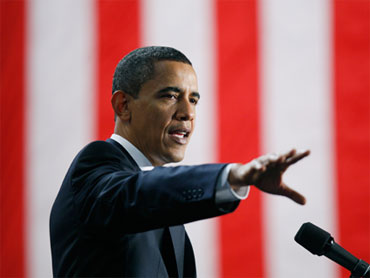 (AP)
After months of pleading with President Obama to be more hands on in the health care debate, congressional Democrats are finally getting their wish.

First, the president put out his own proposal. Second, he held the Blair House summit (which the White House saw as a way to show once and for all that efforts at bipartisanship are fruitless). Those two steps raised the question: would he now go for step three - a political hat trick - by taking the lead in twisting arms in Congress. Some in the White House suggested the answer would be no. As one top adviser told me recently: "That's Nancy's job."

Well, the president appears to disagree. Today he summoned 18 House Democrats to the White House, meeting first with 11 leading liberals, then 7 key moderates. New York Congressman Joe Crowley (chair of the moderate New Democrat Coalition) emerged to say: "The president impressed upon us the need to pass comprehensive health care reform and do it soon. And he called upon the New Democratic Coalition to do what we can within our caucus to make that happen."

The time for listening appears to be over. The president is taking charge, and his message is the same one he so sternly delivered Wednesday in his speech at the White House: (1) Here's my bill. (2) Stop dilly-dallying around and pass it. (3) Now.

One minor problem - he doesn't have the votes. At least not now. But as Rep. Crowley put it: "I think when all is said and done, we WILL have the votes to pass health care reform."

White House spokesman Robert Gibbs offers not a hint of doubt. "The president will have the votes." No ifs, ands or buts. 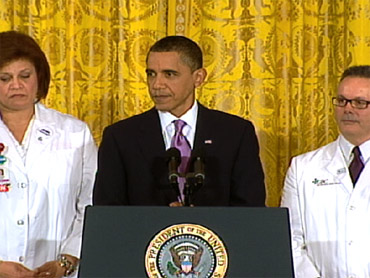 (CBS)
And it's not just the confidence in getting the votes that's taking a lot of observers by surprise -- it's how quickly they think they can do it. At the briefing today, Gibbs confidently asserted that the House will pass the Senate bill before the president gets on the plane for his trip to Guam, Indonesia and Australia. On March 18. That's TWO WEEKS!

Perhaps the most difficult political lift of the entire health care debate and it can happen in 14 days?

They still have to agree on the language with the Senate, figure out the procedural gyrations of reconciliation, get a cost estimate from the Congressional Budget Office (which can take a week or more), PLUS get enough wavering Democrats on board to pass it. It's the kind of effort that normally would take months.

But after playing defense for so long, the White House thinks the tide is finally turning. They think they have momentum, and they don't want to lose it. They certainly don't want congressional Democrats to go home for the two week Easter recess (which begins in just over 4 weeks) and run into the same angry mobs that greeted them last August. That killed the momentum then, and it could do it again.

It's breathtakingly fast by congressional standards, and maybe it's just another White House health care dream. But the president appears to believe the iron is hot -- and the time to strike is now.

(CBS)
Chip Reid is CBS News' chief White House correspondent. You can read more of his posts in Hotsheet here.