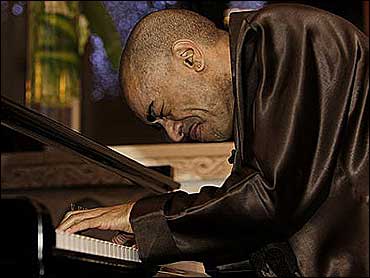 The news release didn't say who Mark Ndesandjo was. Nor did the posters and e-mails promoting the concert Friday in this southern Chinese boomtown where he played piano to raise money for orphans.

But the 200 or so people who showed up for the fundraiser at a posh hotel resort knew the man in a Chinese-style brown silk shirt was the half brother of President-elect Barack Obama. They had a rare encounter with Ndesandjo, who has been dodging the media since his family ties were made public last summer.

For the past seven years, Ndesandjo has been living in Shenzhen, a freewheeling city just across the border from Hong Kong. The announcement for his piano concert identified him as a strategic marketing consultant. He also helped start a chain of eateries in China called Cabin BBQ.

Ndesandjo has a thin mustache, shaved head and a gold stud in his left earlobe. He slightly resembles his half brother, and shares the same trim, athletic physique. He speaks Mandarin, is a vegetarian and practices Chinese calligraphy.

And he said Friday that he has just finished a novel called "Nairobi to Shenzhen," but as yet has no publisher.

Ndesandjo apparently wants a low-key life separate from Obama. No one mentioned his family when he was introduced at the charity concert and cocktail party sponsored by the American Chamber of Commerce in South China.

During brief remarks on stage, Ndesandjo mentioned that he would visit the U.S. in a couple days, apparently to attend Tuesday's presidential inauguration. He said if he didn't make the trip in time, he would embarrass his family.

And he told the crowd that chamber president, Harley Seyedin, was fond of the president-elect. Ndesandjo added, "I like my president, too!" That was the closest he came to mentioning Barack Obama.

Ndesandjo's reluctance to play up his famous relative is extremely unusual in China, where people commonly name drop and use their connections to advance their interests. In China, relationships, or "guanxi," with powerful people are golden and rarely wasted in winning new business or opening other doors.

As his Chinese wife watched, Ndesandjo began his performance with a Chinese tune called "Liuyang River" followed by what he said was "Chopin's First Nocturne." His third and final piece was a jazz tune by Fats Waller called "Viper's Drag."

He played with passion, at times hunched over the keyboard or rocking back with his eyes closed and lips slightly parted in expressions of ectasy and agony.

His Chinese friend and restaurant business partner, Sui Zhenjun, said he has known Ndesandjo since he arrived in China in 2002.

"But it wasn't until July when media reports started surfacing about him being related to Obama that I found out they were related," he told The Associated Press. "He called and told me."

Ndesandjo declined to answer questions from the AP at Friday's concert. He wouldn't confirm basic details about his past or discuss his relationship with Obama.

He uses the surname of his mother, Ruth, the third wife of his father, who died in 1982. He was born in Kenya and moved to the United States when he was a child.

Footage from a Chinese TV news show posted on Youtube shows him practicing calligraphy at home and teaching children how to play the piano, praising them in Mandarin and English.

On Friday, he said he had visited a Shenzhen orphanage shortly after arriving in China and saw rows and rows of sleeping babies while a harried staff of two nurses tried to care for them.

"One child with big black eyes seized my finger and would not let it go," he told the crowd.

After the charity event, Ndesandjo chatted with friends and shook hands as he slowly walked out of the venue pursued by journalists hoping for a comment. He slipped into an elevator and continued to ignore questions as the door slowly closed.