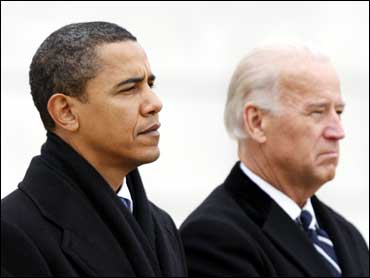 The economic crisis that will dominate Barack Obama's first 100 days as president, and beyond, will give him a rare chance to enact big portions of his agenda that otherwise might have languished for months or years.

Not since Franklin D. Roosevelt has a new president been poised to pack so many ambitious, costly - and, under more normal circumstances, highly contentious - projects into one fast-moving bill. As in 1933, a frightening economic collapse makes the quick political work possible, choking off longer debates and possible opposition that many of the initiatives would have faced in better times.

Congress is working on a mammoth stimulus bill, costing $825 billion or more, to treat the sick economy. Mr. Obama is using it as a vehicle for an array of priorities, including billions of dollars for renewable energy, education and health care innovations.

The economic crisis that drives this train, of course, also poses severe challenges to the new president. His lofty approval ratings could collapse if the number of jobs and home values keep falling. And with the intense focus on stimulating the economy, he will postpone priorities that do not fit into the legislative package.

Mr. Obama already has said he will delay his campaign promise to raise taxes on the wealthy. He also has signaled there will be no prompt action on sticky issues such as revisiting the North America Free Trade Agreement, changing the "don"t ask, don't tell" policy for gays in the military, and making it easier for workers to unionize.

Aside from the economy, Mr. Obama's biggest task will be to wind down the Iraq war and make Afghanistan more stable.

But those tasks will take a couple of years or more. Mr. Obama, meanwhile, can have an immediate and symbolically potent impact on several fronts by issuing executive orders to reverse or change policies of President George W. Bush.

Possibly within hours of being sworn in, Mr. Obama plans to order the closing of the U.S. military prison at Guantanamo Bay. He also has signaled plans to overturn the so-called "Mexico City policy," which forbids U.S. funding for family planning programs that promote and offer abortion. Other early executive orders could lift Bush's limit on federal funding of embryonic stem cell research, and allow California to set tougher emission standards for cars.

"We will have more to say about that at the very beginning," Gibbs said in an interview.

But the biggest priority, Gibbs said, "is getting this economy back on track." The multibillion-dollar stimulus bill should help do that, he said, as it paves the way for legislative action that once seemed more problematic.

During the campaign, for instance, Mr. Obama called for spending $10 billion a year, for five years, to convert paper medical records to electronic formats, a move meant to save money and reduce medical errors. The proposal's fate was uncertain on Election Day. But lawmakers now say the two-year stimulus bill is likely to include $20 billion for the effort.

Barring unforeseen complications, that money will be added with relatively little attention and debate, as the bigger problems of job losses, home foreclosures and business failures continue to dominate the nation's attention.

"It would have been so hard to get it" without the massive spending bill as a vehicle, said one top Obama aide. She would speak only on background because she was not authorized to discuss legislative strategies.

Indeed, some lawmakers and aides say Mr. Obama has so many chances to tuck new or expanded programs into the legislation that he essentially can accomplish his First 100 Days agenda (a term he avoids) in one huge bill. How much credit, or criticism, he might receive is unclear, because many components will not get the attention they would have under a more piecemeal approach.

Consider Pell Grants, the most important federal aid program for college students. Mr. Obama campaigned to expand the program, which this year granted up to $4,700 each to about 6 million students, virtually all with family incomes under $50,000.

Congress and presidents have not fully funded Pell Grants for 30 years. But now they may come close by allocating $15.6 billion for the grants in the stimulus package.

"It's the only vehicle" that could do the job so quickly, said House Appropriations Chairman David Obey, D-Wis.

Other Obama goals that appear likely to be in the economic bill include, although negotiations in Congress continue:

Extending health care subsidies for the recently unemployed under the COBRA program, and for former Medicaid recipients under programs such as TMA, or transitional medical assistance ($39 billion).

Mr. Obama will spend much of his first 100 days lobbying for the economic package and, if it passes, launching its implementation. He also seems likely to move quickly on another campaign promise: to seek a more bipartisan and inclusive governing style than those recently seen in Washington. Soon after his election he met with Republican lawmakers, and his team has energetically wooed GOP lawmakers on economic matters even though there are fewer Republicans in Congress now than when he was elected.

The country faces huge challenges, said Gibbs, who will be the White House press secretary.

"All of these won't get addressed in week one or month one," he said, but Mr. Obama will confront all of them in time.
By Charles Babington