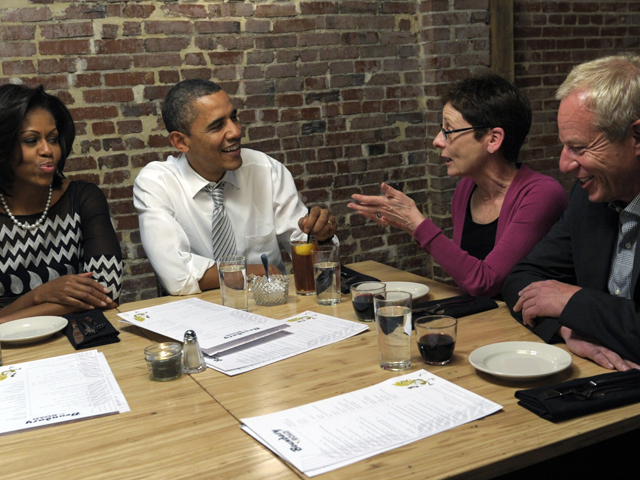 (AP) WASHINGTON - President Barack Obama and first lady Michelle Obama broke bread with a group of small-dollar donors to his re-election campaign on Thursday, gathering for an intimate dinner in a popular Washington neighborhood.

Obama's campaign staged its third "Dinner with Barack" event at Boundary Road, a restaurant along Washington's H Street, a once riot-scarred corridor that has undergone a massive redevelopment. The campaign has offered meals with the Obamas and Vice President Joe Biden to boost contributions online in preparation for the 2012 campaign.

The Obamas sat at a table near exposed brick walls, chatting with supporters from Tennessee, Wisconsin and Massachusetts. The president's campaign has emphasized nominal contributions from average Americans, pointing to such donations as a sign of his broad appeal. Giving was not required for the contest but the campaign asked for donations of at least $3 for anyone willing to contribute.

Boundary Road opened earlier this year, offering a seasonal menu that includes paprika dusted flounder, brick chicken and grilled hanger steak. Obama handled a straw in his glass of ice tea while he chatted with the supporters at the start of the meal. A small contingent of reporters traveling with the president was ushered out of the restaurant before dinner was served.