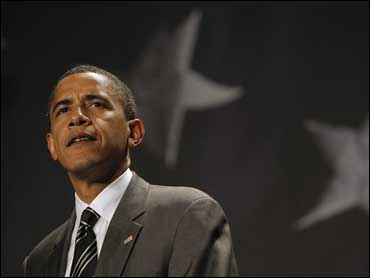 Under Obama's image were these words: "I WANT YOU TO PAY FOR ABORTIONS!"

The sign, which you can see here, labeled Obama "The Abortion President."

Mahoney, the Director of the Christian Defense Coalition, argues that because Obama's health care plan would include expanded access to "reproductive health services" - including abortion - the Illinois senator will effectively mandate that taxpayers, among them people of faith that are strongly against abortion, pay for the procedure.

"Senator Obama is pretty clear that he is not opposed to taxpayer funded abortions," Mahoney said in an interview Tuesday afternoon.

In response to Mahoney's charge, the Obama campaign released a statement saying the candidate "understands that the best way to reduce the need for abortions is to reduce the number of unintended pregnancies."

Added spokesman Nick Shapiro, echoing an earlier statement from the campaign: "He is committed to commonsense solutions to achieve that objective and to changing the tone of the discourse which for too long has devolved into false and negative attacks such as this that do nothing to accomplish that goal."

Under the present version of the Hyde amendment, which was introduced in 1976 to limit federal funding of abortion, Medicaid now covers abortions only in cases of rape, incest, and life endangerment, according to the National Abortion Federation. As a state senator in Illinois, Obama voted against a bill similar to the Hyde amendment that prohibited the use of state funding to pay for abortions.

Obama has also said he supports the Freedom Of Choice Act, which states that "To ensure that a woman's right to choose whether to terminate a pregnancy is available to all women in the United States, Federal protection for that right is necessary."

His web site points out that Obama "has been a consistent champion of reproductive choice and will make preserving women's rights under Roe v. Wade a priority as President."

But questions about abortion remain a significant test for a candidate whose campaign has been built largely upon a call for post-partisan unity. Republican strategist Karl Rove articulated how he sees Obama's challenge in an address to a well-known anti-abortion group on Friday.

"This is a man who stands up and says he is going to bring Republicans and Democrats together to achieve great things for the country," Rove said. "How can you claim to do that if you are at the same time supporting the divisive practice of using taxpayer dollars to fund abortion? You can't. You cannot square that circle."

Obama has made a point of reaching out to evangelicals during his presidential campaign, a group that Democrats have largely ceded to Republicans in recent years. He has come out in favor of faith-based programs and stressed social justice issues that appeal to evangelicals in his speeches. There is even a radio ad running on Christian stations highlighting Obama's religious rhetoric, including statements like "I submitted myself to His will, and dedicated myself to discovering His truth."

Mahoney's media offensive, which CBN's David Brody writes "represents the broader feelings with many conservative Evangelical groups," reflects an effort to counter Obama's appeals by spotlighting his stance in favor of abortion rights, which is at odds with the anti-abortion beliefs of many of the evangelicals he is now courting.

"Evangelicals, including young ones, do care about abortion, and they don't like his position on it," said Steven Waldman, Editor-in-Chief of Beliefnet, who notes that roughly 62 percent of white evangelicals are anti-abortion. "Some of them will vote for him in spite of that, because they think other issues are more important. But I don't think he's going to get a whole lot of them if he doesn't move a couple steps in their direction."

Last week, Relevant Magazine published a story in which Obama seemed to move rightward on one of the much-debated questions when it comes to abortion: The mental-health exemption, which allows doctors to legally perform later-term abortions if necessary to protect a woman's mental health.

"I have repeatedly said that I think it's entirely appropriate for states to restrict or even prohibit late-term abortions as long as there is a strict, well-defined exception for the health of the mother," Obama said. "Now, I don't think that 'mental distress' qualifies as the health of the mother. I think it has to be a serious physical issue that arises in pregnancy, where there are real, significant problems to the mother carrying that child to term. Otherwise, as long as there is such a medical exception in place, I think we can prohibit late-term abortions."

But Obama's campaign, which took heat from abortion rights activists over the comments, later backed off in a statement.

"Senator Obama believes that while 'mental distress' should not be covered by a health exception, there will be cases where carrying to term a pregnancy may seriously damage a woman's mental health and those cases should be covered," Obama spokesman Shapiro said.

Obama has come under some pressure from Sojourners founder Jim Wallis and others to consider what's known as an abortion reduction agenda. Anti-abortion voters might be more willing to look past Obama's views in favor of abortion rights, some believe, if the candidate were to embark on a serious effort to reduce the number of abortions performed in America each year.

But the Obama campaign has resisted calls to adopt an aggressive abortion reduction agenda, possibly over fears that doing so could alienate voters - among them former Hillary Clinton backers - turned off by what they perceive as anything less than a total commitment to the abortion rights position.

Obama has seemed to move towards the center on a number of highly-charged issues in recent weeks, among them gun control, the intelligence bill known as FISA, and, to some extent, his plan for withdrawing troops from Iraq. Polls suggest that despite the stark differences between dueling advocacy groups over abortion, a middle ground exists should Obama want to seek it out.

"Most Americans want abortion to be legal but restricted," said Waldman. "They don't accept the position of pro-life activists, and they don't accept that it should be legal in all circumstances. That's where the center is."
By Brian Montopoli