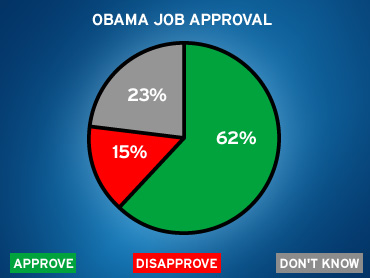 (CBS)
A new CBS News survey out today, detailed in full here, finds that President Obama's approval rating now stands at 62 percent. Fifteen percent disapprove of the president, while 23 percent have not made a decision.

It is not unusual for a newly-inaugurated president to enjoy a favorable approval rating, though Mr. Obama's rating two weeks into his presidency exceeds that of his two immediate predecessors.

President Obama is not setting records for popularity, however: John F. Kennedy enjoyed at 72 percent approval rating at this point in his presidency, while Dwight Eisenhower had a 68 percent rating and Jimmy Carter a 66 percent rating.

Nearly all Democrats and most independents approve of the job President Obama is doing, while Republicans are evenly divided.

There is wide belief that President Obama has strong qualities of leadership, with 85 percent saying so – including 65 percent of Republicans. In July 2008, just 62 percent said Mr. Obama had strong leadership qualities.