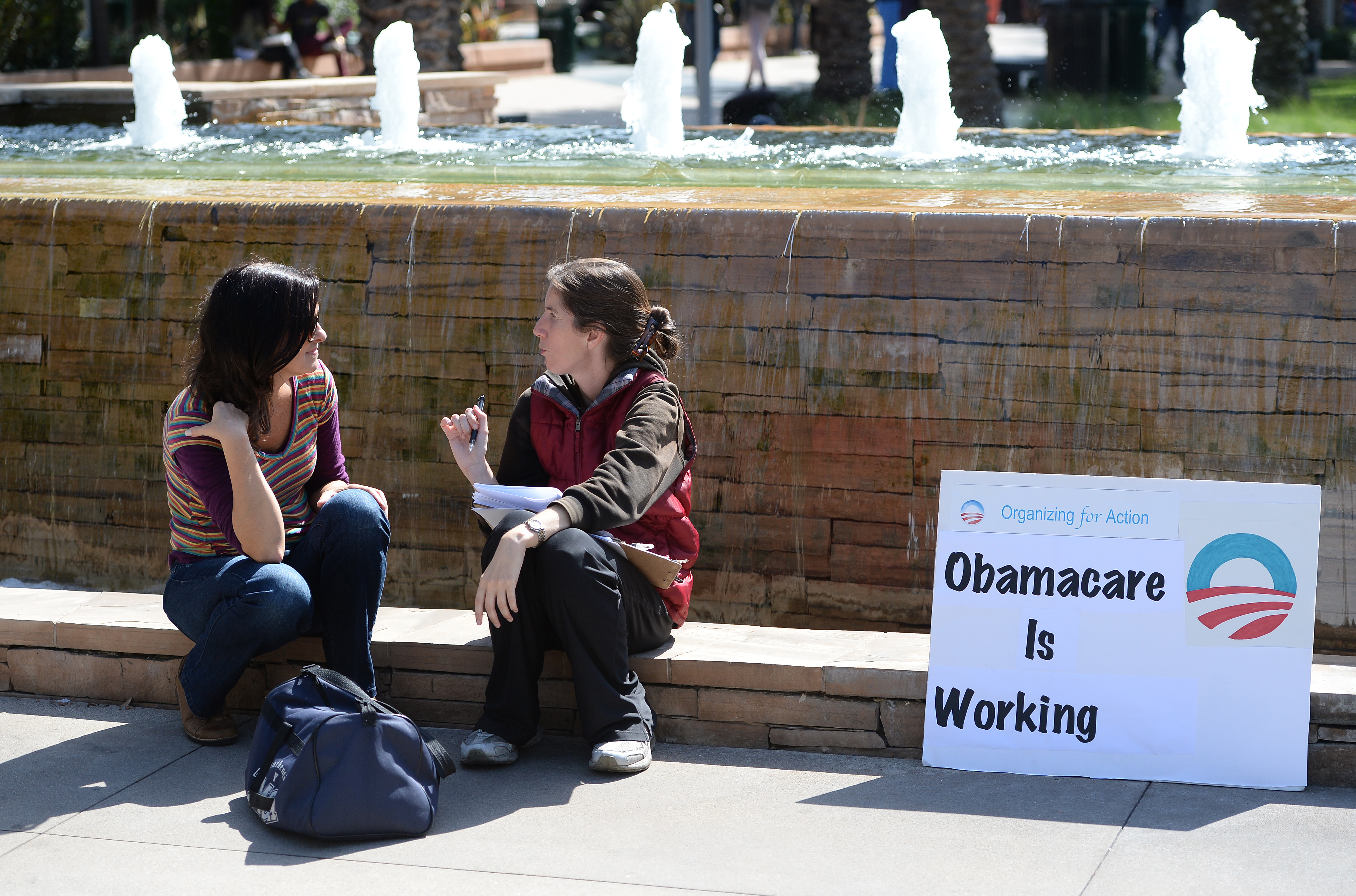 About one-quarter of those who signed up for Obamacare by the end of 2013 were between the ages of 18 and 34, the Obama administration reported Monday, falling below what experts have called the ideal proportion of young adults in the new health insurance marketplace.

However, administration officials said they are comfortable with the proportion of young enrollees so far, and they expect Obamacare enrollment in the key demographic group to accelerate in the second half of the six-month open enrollment period.

“We think that more young people are going to sign up as time goes by,” Gary Cohen of the Centers for Medicare & Medicaid Services (CMS) told reporters on a conference call Monday. “Many of them may have applied and not chosen a plan because they want to think about it, they want to shop around, they haven’t been insured before. So we’re actually very pleased with the percentage that we have so far and we expect that percentage to increase.”

Michael Hash, director of the Health and Human Services’ Office of Health Reform, added that the administration is accelerating its outreach to people, particularly young adults. “We are confident based on the results we have now that we will have a younger mix,” he said.

Open enrollment on the new Affordable Care Act marketplaces began in October, and by Dec. 28, nearly 2.2 million people had enrolled in private insurance plans via the new marketplaces. The administration and nonpartisan experts predicted that by the time open enrollment closed at the end of March, around 7 million would be enrolled.

Of those 7 million, about 2.7 million (or close to 40 percent) would be people between the ages of 18 and 35, the White House said last year. Health policy experts that in order to keep the new Obamacare marketplaces sustainable, the proportion of young adults enrolled should be close to the proportion they represent in the pool of potential individual market enrollees -- or around 40 percent.

Of those who enrolled in a private Obamacare plan by Dec. 28, 30 percent are 34 years old or younger. Twenty-four percent are between the ages of 18 and 34. Adults ages 55 to 64 made up 33 percent of enrollees.

HHS official Nancy Delew told reporters that the demographic figures “are similar to our expectations.”

While older individuals -- who aren’t old enough to qualify for Medicare -- were expected to enroll earlier, while younger adults are expected to procrastinate. “We expect more young adults to come in by the end of March,” Delew said.

The trends so far, she noted, match the trends reported in Massachusetts after it passed its 2006 health reform law. In the first three months of Massachusetts’ year-long open enrollment period in 2007, young people made up less than 23 percent of enrollees. However, the proportion of young enrollees trended upward -- in November 2007, young people accounted for more than 34 percent of enrollees.

Furthermore, trends in the first three months of Obamacare suggest younger people are more inclined to wait. There was a surge in enrollment in December, in part because most of the significant technical problems with HealthCare.gov were resolved, and in part because people were rushing to sign up for coverage starting in 2014. The administration reported Monday that enrollment in the federal marketplace in December was seven-fold greater than the combined total for October and November. Among young adults ages 18 to 34, enrollment was eight-fold greater.

“The numbers show there is a very strong national demand for affordable health care made possible by the Affordable Care Act,” Health and Human Services Secretary Kathleen Sebelius said Monday. “Among young adults the momentum was particularly strong” in December, she noted.

A spokesman for House Speaker John Boehner, R-Ohio, said young adults have been slow to enroll so far because of Obamacare’s shortcomings.

“There’s no way to spin it: youth enrollment has been a bust so far,” Brendan Buck said in a statement. “When they see that Obamacare offers high costs for limited access to doctors – if the enrollment goes through at all – it’s no surprise that young people aren’t rushing to sign up.”

Even if enrollment among young people doesn’t increase, the impact could be marginal, according to research from the Kaiser Family Foundation. Researchers there showed that if young adults only made up 25 percent of the market rather than 40 percent, overall costs in individual market plans would only be about 2.4 percent higher than premium revenues. Given that insurers set premiums to achieve a 3-4 percent profit margins, they'd still be making money. They would, however, likely pass on that increased costs to customers in the form of higher premiums -- though hardly high enough to risk upending the marketplace.

Along with the age breakdown of enrollees, the administration also reported Monday that women make up 54 percent of enrollees so far while men make up 46 percent.

As many as 79 percent are eligible for financial assistance via Obamacare. Meanwhile, just 1 percent of enrollees selected a catastrophic plan.