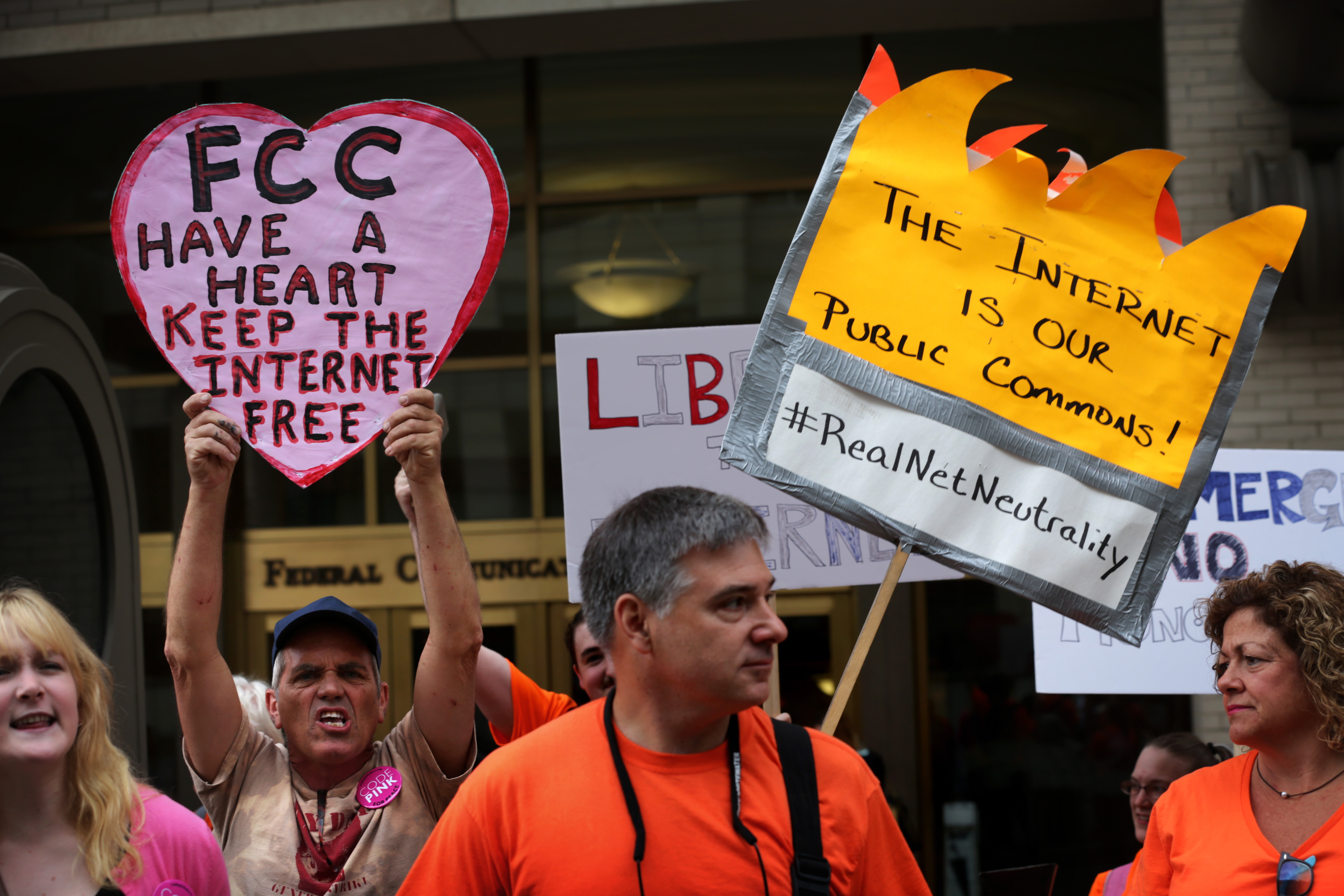 Net neutrality refers to the idea that Internet service providers should treat all web traffic equally, without giving priority access to certain sites or content providers. To ensure that equal treatment, FCC Chairman Tom Wheeler has proposed treating the Internet like a public utility -- such as water or electricity -- rather than as an information service.

Yet in spite of their record of blunt opposition to any enforceable net neutrality rules, Republicans in the House and Senate last month rolled out legislation embracing the core principles of net neutrality -- for instance, it bars the prioritization of certain content based on payment, and it regulates wireless practices. The GOP lawmakers behind the bill are now urging the FCC to hold off on its own regulations to let Congress take the reins.

"The center of gravity in the net neutrality debate has shifted very dramatically in the past year," Kevin Werbach, a former FCC counsel and an associate professor at the Wharton School of the University of Pennsylvania, told CBS News.

Lawmakers have readily acknowledged the new dynamics of the debate. At a hearing two weeks ago, Rep. John Shimkus, R-Illinois, said he remains a "paid prioritization guy," arguing that Internet service providers (ISPs) should be free to adopt whatever business model they see fit.

While opposition to net neutrality has come from the right, the issue has never been purely partisan. Former FCC Chairman Kevin Martin, who was nominated to lead the commission by former President George W. Bush, took the first formal action on net neutrality in 2008 when he tried to sanction Comcast for throttling certain content.

Meanwhile, polls and online dialogue show there are plenty of conservatives who are concerned about large broadband companies (in some cases perceived as liberal-leaning) discriminating against certain kinds of content or content providers.

A poll conducted in November for the Internet Freedom Business Alliance found that 83 percent of self-identified "very conservative" voters said they were concerned about the possibility of Internet service providers having the power to "influence content." Another November survey from the University of Delaware's Center for Political Communication found that 85 percent of Republicans are opposed or strongly opposed to allowing ISPs to charge some websites or online streaming services extra for faster speeds.

When lawmakers like Cruz posted statements online in recent months stating their opposition to net neutrality, they faced significant backlash. One of the most "liked" comments on a Facebook posting from Cruz reads, "As a Republican who works in the tech industry I can say that this statement shows you either have no idea what you are talking about or you are bought and paid for by the American Cable monopoly."

The issue gained widespread attention last summer after John Oliver, host of HBO's satirical news program "Last Week Tonight," encouraged his viewers to take advantage of the FCC's open comment period on net neutrality. Ultimately, nearly 4 million Americans left comments on the matter, eclipsing the previous record set for the highest number of public comments received by the FCC -- that was 1.4 million in the wake of Janet Jackson's "wardrobe malfunction" during the 2004 Super Bowl halftime show.

As the tide has turned in favor of net neutrality, even the ISPs have embraced the general concept -- companies like Comcast and AT&T have said that they agree they shouldn't discriminate against any content.

"This should all sound very familiar to my Democratic colleagues because they are the rules many of you and the president have been calling for for some time," Upton said at a hearing last month.

However, net neutrality advocates are firmly opposed to the legislation for a variety of reasons -- most critically, because it affirmatively forbids the FCC from any further rulemaking in this area. The bill would effectively hamstring the agency from amending the rules, even as new, unanticipated challenges in online communications emerge.

"Yes, the Republican congressional caucus has come a long way and moderated its tone dramatically over the last year," Matt Wood, policy director for the group Free Press, told CBS News. "But none of that means this bill was a sincere or adequate attempt to preserve net neutrality. The Thune-Upton proposal offers nothing more than rigid protections in name only."

"I've work in this industry my whole adult life, and I know how quickly technology has changed," Etsy CEO Chad Dickerson told the congressional panel. "So how can we be sure that this bill anticipates every possible form of discrimination?"

Dickerson and others also said the bill leaves easily-exploited loopholes for content discrimination. "For example, under this bill, broadband companies could prioritize their own services over others," Dickerson said.

Wood and other net neutrality advocates say there's no need to wait for an improved bill from Congress to enact net neutrality rules -- the FCC has the tools it needs to do so on its own. The commission will vote on Chairman Wheeler's proposal at the end of the month. If they adopt the new rules, ISPs will surely challenge them in court. However, Wood and others contend the FCC is on solid legal ground if it regulates the ISPs under Title II of the Communications Act, as Wheeler is proposing.

"Congress updated that law on a bipartisan basis at the start of the Internet era, and its basic protections against unreasonable discrimination are just as important as ever -- even in competitive and deregulated markets," Wood said.

Republicans, meanwhile, argue that the public's representatives should tackle the issue, rather than a bureaucratic agency.

"We have a very important choice to make between letting three very smart and capable, but unelected people at the FCC, a majority of the commission, use a statute written for another era to cobble together a regulatory scheme," Rep. Greg Walden, R-Oregon, said as he presided over last month's Energy and Commerce subpanel hearing. "And undoubtedly, we'll end up in court for years in litigation, providing no protections, but much uncertainty. Or we can do our job and craft a new law for this century through the open and transparent legislative process that we are beginning today."

"There is ultimately a longer game here than net neutrality, which is what authority the FCC has into the future over broadband services," he said. "From an industry standpoint, ultimately they are probably more concerned from getting out from under FCC oversight than they are about authorization to engage in hypothetical discrimination."