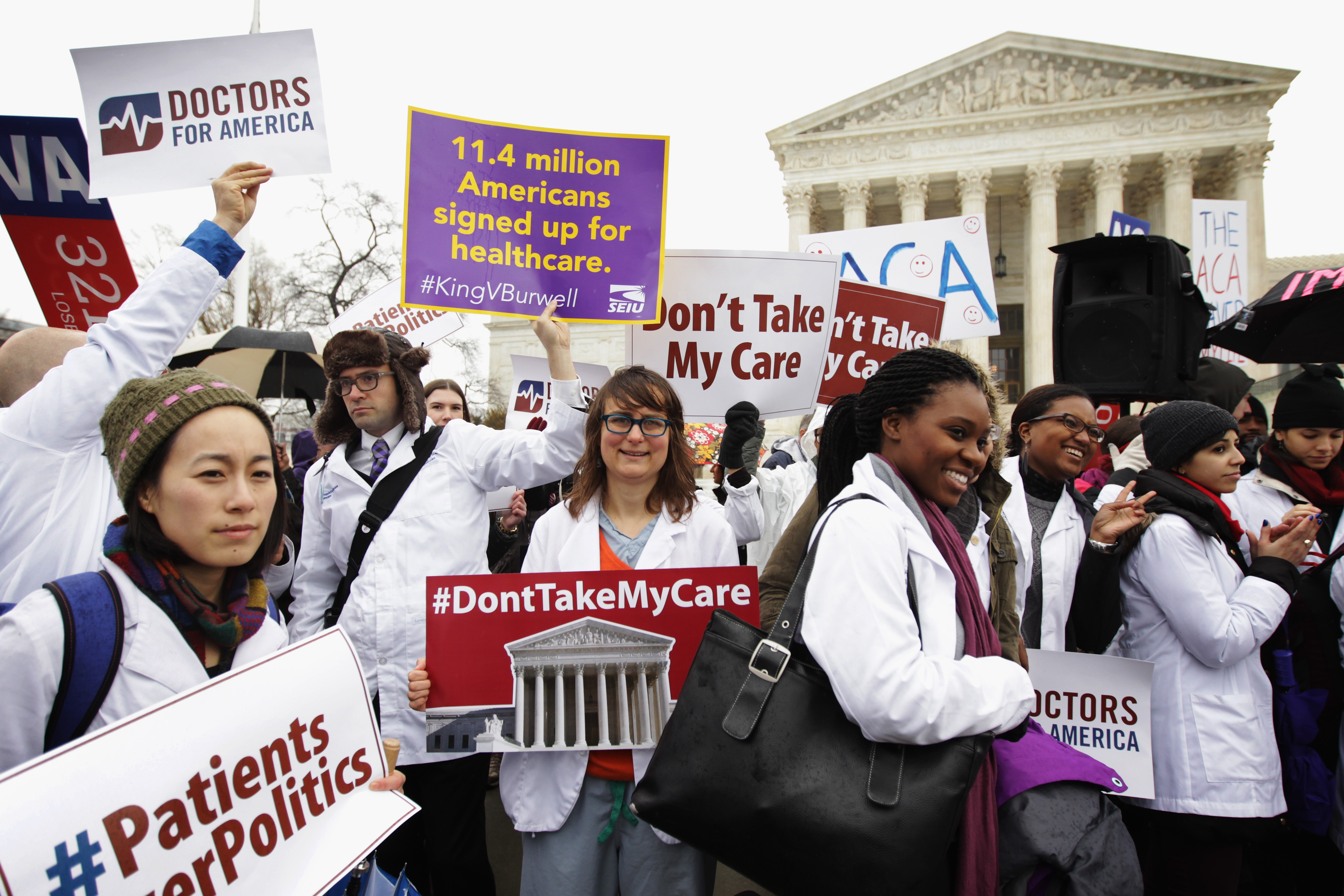 The Supreme Court was sharply divided Wednesday in the latest challenge to President Obama's health overhaul, this time over the tax subsidies that make insurance affordable for millions of Americans.

The justices aggressively questioned lawyers on both sides of what Justice Elena Kagan called "this never-ending saga," the latest politically charged fight over the Affordable Care Act.

Chief Justice John Roberts -- who was the decisive vote to uphold the law in 2012 -- said almost nothing in nearly 90 minutes of back-and-forth. Meanwhile, Justice Anthony Kennedy's questions did not make clear how he will come out. Kennedy "seemed sympathetic to the conservatives," CBS News correspondent Jan Crawford reports after attending the oral arguments. "At the same time, he seemed troubled by the challengers' arguments."

Otherwise, the same liberal-conservative divide that characterized the earlier case was evident.

Opponents of the law say that only residents of states that set up their own insurance markets can get federal subsidies to help pay their premiums. The administration says the law provides for subsidies in all 50 states. Millions of people could be affected by the court's decision.

The liberal justices peppered lawyer Michael Carvin almost from the outset of his argument to limit the subsidies.

Justice Ruth Bader Ginsburg said the law set up flexibility for states to either set up their own markets or rely on the federal HealthCare.gov. Giving subsidies only to people in some states would be "disastrous," Ginsburg said.

"It may not be the statute Congress intended, but it may be the statute Congress wrote," Scalia said of the provision in question. The case focuses on four words in the law, "established by the state." The challengers say those words are clear and conclusive evidence that Congress wanted to limit subsidies to those consumers who get their insurance through a marketplace, or exchange, that was established by a state.

Verrilli argued that the law can only be read more broadly and noted that millions of people would lose health insurance if the court rules against the administration.

Alito wondered if the justices could delay the effect of such a ruling to allow states and perhaps the federal government to act. Scalia said he believes Congress would act.

"This Congress, Your Honor?" Verrilli said to widespread laughter in a packed courtroom that included leading congressional Democrats and Republicans.

White House Counsel Neil Eggleston was among those in the audience. Afterwards, he briefed President Obama on the arguments. White House spokesman Josh Earnest said the administration was "quite pleased" with Verrilli's performance.

A number of House members from both sides of the aisle also attended arguments, including Republican Reps. Paul Ryan of Wisconsin, Fred Upton of Michigan and John Kline of Minnesota -- three House leaders who have proposed further steps to dismantle Obamacare, should the court throw out the national subsidy system. Top Democratic Reps. Sandy Levin of Michigan and Xavier Becerra of California.

A ruling that limits where subsidies are available would have dramatic consequences because 34 states have opted against their own marketplace, or exchange, and instead rely on the U.S. Health and Human Services Department to run their respective marketplaces. Independent studies estimate that 8 million people could lose insurance coverage.

Activists on both sides were in place outside the marble courthouse by 5:30 a.m. Wednesday. Some held placards showing how many people in each state would lose insurance if the court ruled that the law does not allow subsidies everywhere.

Terry Donald of St. Petersburg, Florida, was in front of the Supreme Court to support the administration's position. He called the subsidies an "absolute lifeline" for small business owners such as himself. Through Obamacare, Donald said that he pays about $100 a month for insurance. Without subsidies, his insurance would cost more than $700.

"The difference that it makes financially, medically and emotionally cannot be overestimated," he said. "For my wife and I, it makes going to the doctor and getting care for an illness or injury a normal event, not one to be avoided because of a high expense."

Karen Hines of Virginia Beach, Virginia also praised the health care law. "I'm a well-educated middle-class woman," she said. But without Obamacare, "I could not obtain health insurance because I'm a three-time breast cancer survivor."