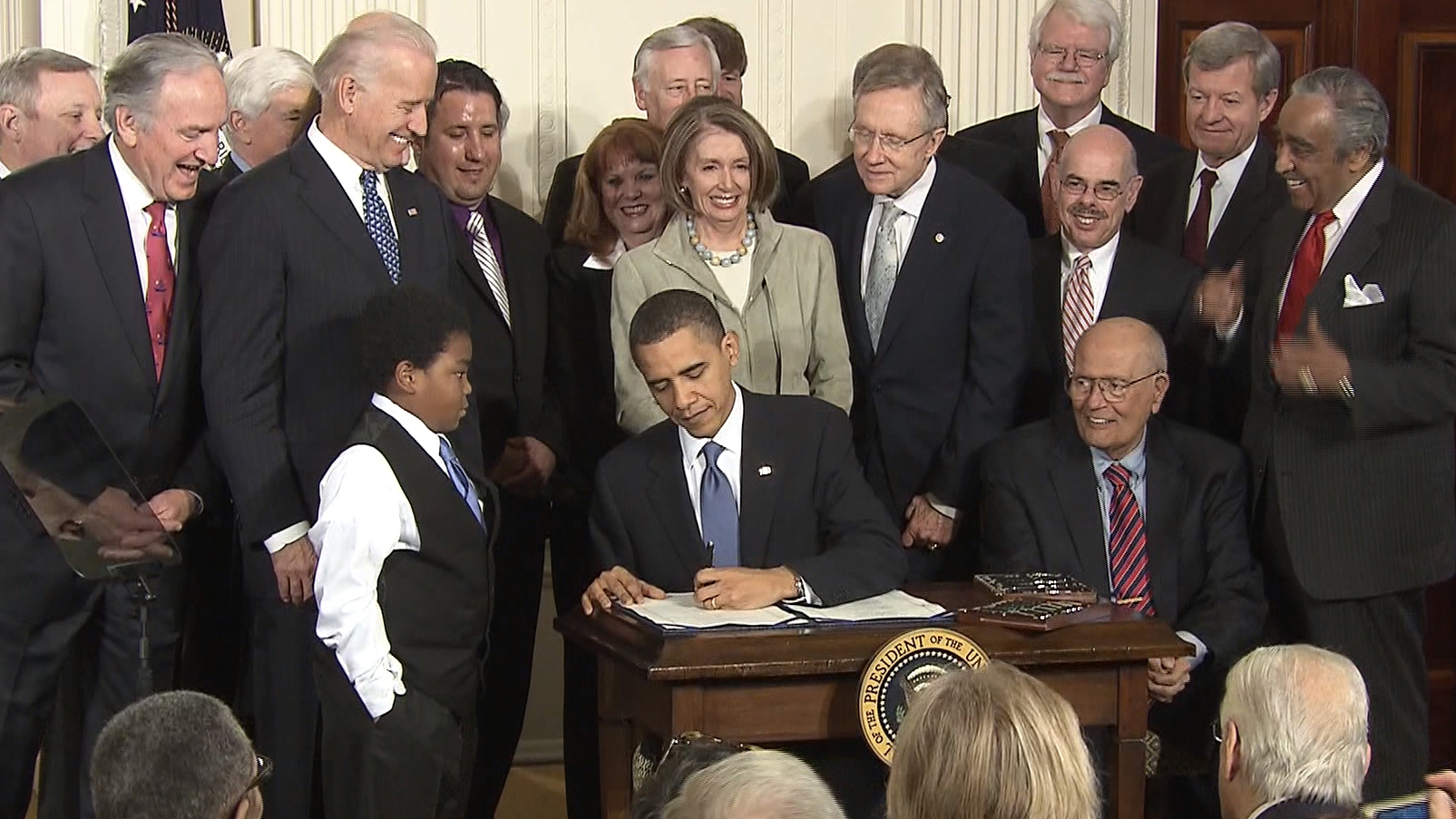 The following is a script of "Obamacare" which aired on Jan. 11, 2015. Lesley Stahl is the correspondent. Rich Bonin, producer.

This month marks one year since health insurance coverage under the Affordable Care Act began, and from the president's point of view: so far, so good. More than 10 million Americans who didn't have health insurance before have signed up. But congressional Republicans are gunning for Obamacare. Even if they can't outright repeal it, they want an overhaul.

Steven Brill: Good news: More people are gonna get health care. Bad news: We have no way in the world that we're gonna be able to pay for it.

Steven Brill says that the outrage is what the Affordable Care Act doesn't do.

Lesley Stahl: So all the cost controlling side of this just went by the wayside?

Steven Brill: 99 percent of it.

"Good news: More people are gonna get health care. Bad news: We have no way in the world that we're gonna be able to pay for it."

Brill learned that when it came to controlling costs, the White House was told up front--

Steven Brill: If you go after costs, you're never going to get anything passed because the lobbyists will just not allow it to be passed.

Lesley Stahl: So let's go through what each entity won.

Steven Brill: The drug companies they were going to get $200-plus billion worth of new customers able to pay for drugs. They were going to avoid the calamity of the real reforms that they were worried about: price controls generally.

Steven Brill: You and I being able to buy drugs from Canada. That would have cost them hundreds of billions.

The hospital lobby did agree to cuts in how much the federal government compensates them for Medicare patients, but Brill says overall the trade off in new paying patients would more than make up for that. And the hospitals managed to keep other cost controls completely off the table, allowing them to charge whatever they can get for hospital stays and greatly mark up drug and test prices.

In writing his book, Brill wanted to find out how hospitals jack up those prices. He found the answer in the Recchi family of Lancaster, Ohio. Their experience, both before and after Obamacare kicked in, shows all the things Brill says the law should've dealt with -- like highly inflated hospital charges -- but didn't.

Sean Recchi: I just want to get healthy and that's what I told 'em.

Their story begins in 2012 when Sean Recchi - then 42, father of two - was diagnosed with cancer, stage 4 non-Hodgkin's lymphoma.

Stephanie was determined to get him to MD Anderson in Houston, one of the premier non-profit cancer centers in the country. But because their health insurance policy was so limited, they had to pay upfront: first $48,900 for the evaluation...then more for the actual treatment.

Stephanie Recchi: And they told me that we would have to give them another $35,000 to get him, to get chemo.

Lesley Stahl: Did you have the money?

Stephanie Recchi: I didn't. My mother did.

Lesley Stahl: Your mother had to give you the money?

Stephanie Recchi: Yes. I just kept thinking in the back of my mind, there's a mistake and we'll work it out. I just have to get him there and I have to get him better. That was my main concern.

When Sean was sick, they felt vulnerable and scared. Like most people in that kind of crisis, they never once asked what any specific item or test cost. When they got the bill, they gave it to Steven Brill, who found charges he couldn't believe.

Steven Brill: The first thing I saw in the bill was a generic Tylenol for $1.50. Now that's not--

The charges add up - over the single-spaced 18 pages of the bill. Independent hospital economists say these are all greatly inflated over their actual costs:

Steven Brill: You and I need to get into this business. It's a really good-- They call it nonprofit, but it's a good business.

The single largest charge was for his cancer drug, Rituxan: for one dose, the hospital billed him $13,702.

Lesley Stahl: How many times - that's for--

Lesley Stahl: This is a nonprofit hospital. What does nonprofit mean?

Steven Brill: They've created in health care an alternate universe economy, where everybody except the doctors and the nurses, makes a ton of money. And nobody is holding them accountable and Obamacare does zero to change any of that.

MD Anderson declined to appear on camera but sent us a letter defending the prices it charges patients, saying, the costs reflect in part "using and maintaining expensive, state-of-the-art medical equipment... [and] research to develop new and better treatments."

But Brill says hospitals get some federal aid for new technology and says in general large nonprofit hospitals are thriving businesses. He suggested we go to Pittsburgh. Once a steel city, today Pittsburgh's biggest business is a hospital complex, the University of Pittsburgh Medical Center. Its CEO, Jeffrey Romoff, showed us the view from his office.

"They've created in health care an alternate universe economy, where everybody except the doctors and the nurses, makes a ton of money. And nobody is holding them accountable and Obamacare does zero to change any of that."

Lesley Stahl: Here we are in the U.S. Steel building. Steel defined Pittsburgh and now, you, the hospitals define Pittsburgh, in the sense that you employ more people than any--

It's a $12 billion- a-year global health conglomerate -- by one estimate, the nation's top grossing nonprofit hospital.

Lesley Stahl: So what's your salary?

Jeffrey Romoff: My salary is seven - is $6 million.

Lesley Stahl: Yeah, One of the arguments against these nonprofits that are so big and make all this money is that so much of it's going to executive pay. You make $6 million. You have seven executives here who make more than $2 million. And you have another 23 who make more than a million.

Jeffrey Romoff: So let's add it all up. What do you have, $100 million on $12 billion? I can't off the top of my head calculate what percentage that is. But it is likely less than one percent.

Lesley Stahl: No, but it's a nonprofit hospital paying exorbitant executive pay.

Jeffrey Romoff: Well, that's your judgment of it. I think my board determines what the appropriate compensation is for me and for all the other executives.

He does run a top-ranked medical research center with a reputation for excellence, and he says he's been trying to rein in hospital costs. And he thinks he's come up with a solution.

Jeffrey Romoff: We have our own insurance company.

Lesley Stahl: You have your own insurance company?

Lesley Stahl: As part of the company?

He says the beauty of it is there's no incentive for his hospital to overcharge his insurance company. In other words, there's nothing to gain in inflating a patient's bill.

Jeffrey Romoff: We are the same family. It's the same kitty and our premiums now are among the lowest in the country.

His insurance company's policies can be used at his hospitals as well as selected rival hospitals in the state. He thinks this idea of hospitals with their own insurance companies could be a model for the nation, and the best way to reduce inflated costs.

Lesley Stahl: OK, but you admit that you were part of the problem--

Lesley Stahl: So you admit that you participated in a system that would willy-nilly jack prices way up?

Jeffrey Romoff: Did I say anything about willy-nilly?

Lesley Stahl: What do you have to say about the hospitals who are still doing that?

Jeffrey Romoff: It is untenable and unsustainable.

To be fair, hospitals do save lives. As Brill says, "they do God's work." In Sean Recchi's case, MD Anderson's treatment plan - the chemo - worked.

Sean Recchi: I am 100 percent cancer clean, and feel great.

Even though he's $84,000 in the hole. Today - despite Sean's preexisting condition, the Recchis have good health insurance, because in 2013 they signed up for Obamacare. So now they have total coverage, 100 percent subsidized by taxpayers.

Lesley Stahl: So Obamacare has passed. MD Anderson goes to give someone Rituxan, are they still charging $13,700?

Steven Brill: They probably are if you don't have insurance.

If you do have insurance - through Obamacare or otherwise, prices would in most cases, be negotiated down. What about the Recchis' $84,000 bill at MD Anderson in Houston? It would most likely not be negotiated down because they signed up for Medicaid under Obamacare in Ohio, which is not recognized in Texas.

In their letter, MD Anderson wrote: "thanks to the Affordable Care Act, experiences like the Recchi's should become less common. However, the problem still exists." So even while some prices are being negotiated down, not all prices are. And Brill says that overall costs are still going up because there are now millions more people getting covered and treated.

Lesley Stahl: President Obama says over and over that costs are coming down, or he implies they're coming down because of the Affordable Care Act.

Health care costs have slowed down, though Brill says not because of Obamacare... And besides, they're still rising at a rate double the pace of inflation.

Steven Brill: The much touted, you know, savings that the president keeps talking about, it's still increases.

Steven Brill: You know, if there's a stat, if there's a piece of data that comes out that says that the galloping increase in the cost of some aspect of health care has started galloping a little less, it's touted as the cost is going down. It's just ridiculous.

Brill says he has come to appreciate the good that the Affordable Care Act has done - in that it's a safety net for so many people like the Recchis. But he wants the public to know that what was to be at its heart - driving down the cost of health care - was neglected, and it's the taxpayers who are left holding the bag.

Lesley Stahl: Is there any way now to go back and add cost containment?

Steven Brill: It was impossible then; it's more impossible now. When this becomes a fiscal crisis, that may be the ultimate res--

Lesley Stahl: But you have to wait for it to be a crisis?

Steven Brill: Yeah, that's the way we do a lot of governing in this country; we wait for something to be a crisis. When something becomes a crisis that enough of us care about, then the lobbyists matter a lot less, because we care a lot more.

The race to put supersonic flights back in the sky