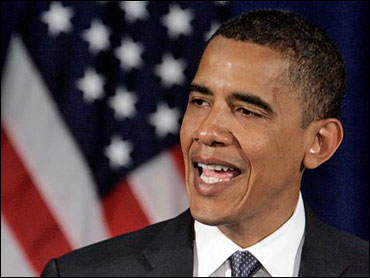 Barack Obama's campaign envisions a path to the presidency that could include Virginia, Georgia and several Rocky Mountain states, but not necessarily the pair of battlegrounds that decided the last two elections - Florida and Ohio.

At a fundraiser held at a Washington brewery Friday, Plouffe told a largely young crowd that the electoral map would be fundamentally different from the one in 2004. Wins in Ohio and Florida would guarantee Obama the presidency if he holds onto the states won by Democrat John Kerry, Plouffe said, but those two battlegrounds aren't required for victory.

Florida, which has 27 electoral votes this year, gave the presidency to George W. Bush in the disputed election of 2000. Ohio, with its 20 electoral votes, ensured Mr. Bush of re-election in 2004 in his race against Kerry.

The presumed Democratic nominee's electoral math counts on holding onto the states Kerry won, among them Michigan (17 electoral votes), where Obama campaigns on Monday and Tuesday. Plouffe said most of the Kerry states should be reliable for Obama, but three currently look relatively competitive with Republican rival John McCain - Pennsylvania, Michigan and particularly New Hampshire.

Asked about his remarks, Plouffe said Ohio and Florida start out very competitive - but he stressed that they are not tougher than other swing states and said Obama will play "extremely hard" for both. But he said the strategy is not reliant on one or two states.

Plouffe has been pitching such a new approach to the electoral map in calls and meetings, according to several people who discussed the conversations on the condition of anonymity because they were meant to be private. Plouffe confirmed the descriptions in the interview.

Plouffe and his aides are weighing where to contest, and where chances are too slim to marshal a large effort. A win in Virginia (13 electoral votes) or Georgia (15 votes) could give Obama a shot if he, like Kerry, loses Ohio or Florida.

Plouffe also has been touting Obama's appeal in once Republican-leaning states where Democrats have made gains in recent gubernatorial and congressional races, such as Colorado, Nevada, New Mexico, Montana, Alaska and North Dakota.

Obama's campaign has spent heavily on time and money in Virginia, where a Democratic presidential candidate hasn't won since 1964. In recent elections, however, high-profile Republicans have lost there. And in a sign of how serious Obama is taking the state, Plouffe dispatched to Virginia many aides who helped Obama stage his upset win in the Iowa caucuses Jan. 3.

The key, Plouffe told supporters, will be to register new black voters and new young voters in Virginia.

Likewise, Georgia has many unregistered black voters who could turn out in record numbers to support the first major-party nominee who is black, he argued. Plouffe said the campaign also will keep an eye on Mississippi and Louisiana as the race moves into the fall to see if new black voters could put them within reach.

In a telling bit of scheduling, Obama declared himself within reach of the nomination at the statehouse in Iowa, yet another state he hopes to put in play.

Plouffe is warning Democrats that McCain is an appealing candidate who has proved he can take votes from the middle before and could do so again. McCain won New Hampshire as a GOP candidate in 2000 and 2008, thanks in large part to the state's high number of independent voters.

Clinton won Michigan's renegade primary after the national party stripped the state of its delegates for moving its contest to January. Obama's name wasn't even on the ballot. Clinton handily won the Pennsylvania primary in April, gaining strong support from white, working-class voters.

Plouffe argues that McCain squandered his opportunity to reach independent voters in the past three months.

McCain's aides acknowledge frustration among fellow Republicans for the slow-to-start campaign. Even though McCain clinched his party's nomination in early March, his supporters didn't name operatives to run the must-win states, let alone open offices in key states. While Democrats hammered each other in their marathon contest, McCain left aides from his primary states sitting still, waiting for orders. It took more than two months for McCain's national headquarters to approve budgets for the battleground states.

The task, Plouffe said, is to define McCain as tied to Mr. Bush on the economy, the war and abortion rights. He said the campaign will go on offense against McCain, besides playing aggressive defense when criticized.

That promise was also given by Obama, who said Friday night, "If they bring a knife to the fight, we bring a gun." Critics have questioned why a candidate who promotes a new kind of politics planned such bare-knuckles tactics.

Among independent voters, McCain and Obama are about tied in favorability ratings in recent polls.

Plouffe in recent days has been making his pitch aggressively - part cheerleading, part sales job. Many of Clinton's supporters remain frustrated with how national Democrats resolved the issue of Michigan's delegates, agreeing to seat all of them at the nominating convention but penalizing them by half for violating the calendar, and Plouffe has tried to quell that frustration.

He wraps up the pitches by asking Democrats to imagine Obama taking the oath of office. On Friday at the Capitol City Brewery, about a block from where that would happen, Plouffe pointed toward the Capitol steps to reinforce the visual.