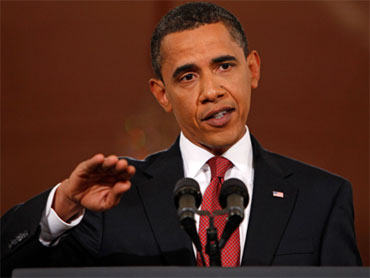 (AP)
President Obama was asked at his primetime press conference Wednesday night if non-wealthy Americans are going to have to give anything up in the final version of his health care reform effort.

"They're going to have to give up paying for things that don't make them healthier," he said. "And I -- speaking as an American, I think that's the kind of change you want."

The president went on to say that there is presently insufficient coordination between hospitals and doctors, which he said are wasting money by not communicating when it comes to things like sharing test results. He said those types of inefficiencies are raising premiums.

Mr. Obama went on to say that people should start paying lower prices for comparable medication.

Watch CBS Videos Online
"If there's a blue pill and a red pill, and the blue pill is half the price of the red pill and works just as well, why not pay half price for the thing that's going to make you well?" he asked. (The reference to the blue vs. red pill no doubt reminded some viewers of the 1999 film "The Matrix.")

The president said "the system right now doesn't incentivize" paying less, adding that doctors, hospitals and patients are going to need "to be more discriminating consumers."

"But I think that's a good thing, because ultimately we can't afford this," he continued. "We just can't afford what we're doing right now."

He then addressed the question of the potential impact on the deficit and national debt of health care reform. The president has said he will not sign a bill that would increase the deficit.

Mr. Obama said the argument that the government should not be spending money at a time when it has already given out major bailouts and many Americans are cutting back "has been used effectively by people who don't want to change health care to suggest that somehow this is one more government program."

He said that waste in the system must be eliminated in order to address the deficit, $1.3 trillion of which, he pointed out, he inherited.

"So to all -- everybody who's out there who has been ginned about this idea that the Obama administration wants to spend and spend and spend, the fact of the matter is, is that we inherited an enormous deficit, enormous long-term debt projections," he said.

"We have not reduced it as much as we need to and as I'd like to," added Mr. Obama. "But health care reform is not going to add to that deficit. It's designed to lower it. That's part of the reason why it's so important to do, and to do now."

Obama: "Why Not Pay Half Price?"