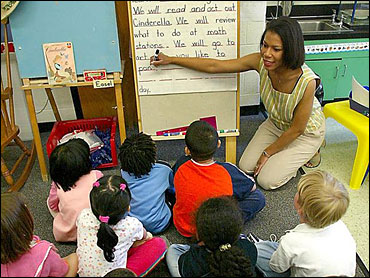 President Barack Obama is promising a "cradle-to-career" education for all Americans as well as stronger teacher standards and a reduced dropout rate.

Mr. Obama says he wants the country to set higher education standards, including a quicker start for children in kindergarten and a much better high school graduation rate. Saying we have "accepted failure for too long," he called for America to have an education system that is once more the envy of the world.

"America's place as a true global leader will be put at risk" if it doesn't substantially improve educating "our sons and daughters," he said. "We've let our grades slip."

He did not propose any specific legislative goals on education in his speech Tuesday at the U.S. Hispanic Chamber of Commerce. Instead, the president talked about how America must work much harder to keep pace with international competitors.

Part of the blame he put down to Washington bickering, "the same stale debates that have paralyzed progress and perpetuated our educational decline." He rapped Democrats on the knuckles for resisting the idea of rewarding excellence in teaching with extra pay, and Republicans for opposing new investments in early education.

"It's more money versus more reform; vouchers versus the status quo," he said. "There has been partisanship and petty bickering, but little recognition that we need to move beyond the worn fights of the 20th century if we are going to succeed in the 21st century.

"The time for finger-pointing is over."

He said his Education Secretary Arne Duncan will help cut wasteful education programs and free up resources for investments in early childhood initiatives.

The president challenged states to raise the quality of early learning programs.

He also called for raising standards and assessments of both school and teacher performance, to stop what he likened to "a race to the bottom."

"Eight of our states are setting their standards so low that their students may end up on par with roughly the bottom 40 percent of the world," Mr. Obama said. "That is inexcusable.

"I am calling on our nation's governors and state education chiefs to develop standards and assessments that don't simply measure whether students can fill in a bubble on a test, but whether they possess 21st century skills like problem-solving and critical thinking, entrepreneurship and creativity," he said.

He also said that where the so-called "charter schools" have been shown to be successful, they should be encouraged.

Mr. Obama also suggested shaking up the academic calendar which he described as once fitting a nation of farmers who needed their kids home to plow fields: "Our children spend over a month less in school than children in South Korea. That is no way to prepare them for a 21st century economy.

"That is why I'm calling for us not only to expand effective after-school programs, but to rethink the school day to incorporate more time - whether during the summer or through expanded-day programs for children who need it. I know longer school days and school years are not wildly popular ideas - not in my family, and probably not in yours - but the challenges of a new century demand more time in the classroom. If they can do that in South Korea, we can do it right here in the United States of America."

Mr. Obama also supported efforts to improve recruitment and retention of teachers, calling on a new generation of Americans to serve their country in the classroom.

He also promised to hold teachers more accountable - mentoring new educators with experienced ones, rewarding effective ones with more pay, and removing bad teachers from the classroom. "I reject a system that rewards failure and protects a person from its consequences. The stakes are too high. We can afford nothing but the best when it comes to our children's teachers and to the schools where they teach."

The president also said parents need to play a role in their children's education careers that government cannot fulfill. "The bottom line is that no government policies will make any difference unless we also hold ourselves more accountable as parents," he said.

Mr. Obama recalled his own experience as a child when his mother would supplement his classroom studies at home with lessons from a correspondence course, waking him up at 4:30 in the morning every day to go over lessons before school began.

"And whenever I'd complain or find some excuse for getting more sleep, she'd patiently repeat her most powerful defense: 'This is no picnic for me either, Buster!'"

He also promised to simplify federal college assistance forms ("so it doesn't take a Ph.D. to apply for financial aid") and take steps to make high education or technical training more affordable.

In addition to challenging educators and parents to make education their collective priority, he also spoke to students. Alarmed by dropouts rates that have tripled in the past 30 years, the president said, "To any student who's watching, I say this: 'Don't even think about dropping out of school.'

President Obama is promoting his education overhaul as he presses forward with stimulus and government reform plans, at a time when schools across the nation have been struggling.

"I know there are some who believe we can only handle one challenge at a time," Mr. Obama said, alluding to critics who claim he has taken on too much too quickly in his first weeks in office. "They forget that Lincoln helped lay down the transcontinental railroad, passed the Homestead Act, and created the National Academy of Sciences in the midst of Civil War. Likewise, President Roosevelt didn't have the luxury of choosing between ending a depression and fighting a war."

(YouTube )
The economy is in fact front-and-center in the minds of many students who have the most to gain from education reform, as Mr. Obama said. He told of Yvonne Bojorquez (left), a California high school student who with her classmates produced a video relating their concerns about how the economic crisis affects them every day, as well as their ability to fulfill their potential as doctors, lawyers or other professionals.

Mr. Obama did not propose new spending during the speech, although he already has taken steps on education. His $787 billion economic stimulus package provides $41 billion in grants to local school districts.

He also plans to send $79 billion in state fiscal relief to prevent cuts in state aid and another $21 billion for school modernization.