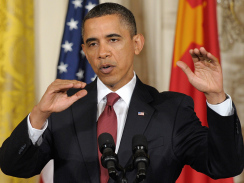 China's rapid growth is often painted as a threat to American interests. But President Obama said today that the country's economic progress benefits the United States and opens the door to greater international stability and humanitarian progress.

"We welcome China's rise," Mr. Obama said at a press conference at the White House with Chinese President Hu Jintao. "I absolutely believe that China's peaceful rise is good for the world, and it's good for America."

He added, "We just want to make sure that that rise occurs in a way that reinforces international norms and international rules, and enhances security and peace, as opposed to it being a source of conflict either in the region or around the world."

Mr. Obama acknowledged today that China's poor human rights record remains a "source of tension" between the two countries. However, he said the nation's development will lift millions out of poverty, "and that's a positive good for the world, and it's something that the United States very much appreciates and respects."

The president also pointed out that China's rise gives the U.S. an opportunity to boost exports.

Mr. Obama noted that the United States economy is still three times larger than China's, despite the U.S. having one-quarter of China's population. While China has a long way to go to catch up the U.S., he said, its growth means increased trading opportunities between the two nations.

A more robust China will also give the U.S. a stronger partner on international issues like counter-terrorism efforts and climate change, Mr. Obama argued -- so long as China functions as a responsible actor on the world stage.

Watch at left: Obama and Hu are asked about human rights during the press conference.

"That is something that can help create stability and order and prosperity around the world, and that's the kind of partnership that we'd like to see," he said.