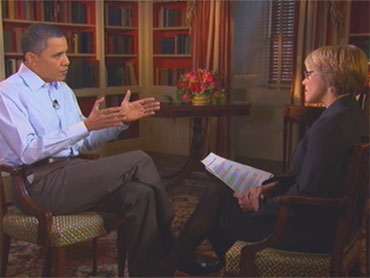 (CBS)
Two hours before the Colts and Saints faced off in Super Bowl XLIV, President Barack Obama faced off at the White House with CBS Evening News Anchor and Managing Editor Katie Couric for a pre-game interview.

Taking a moment away from the football festivities — and taking advantage of the hundreds of millions of viewers glued to their TVs — Mr. Obama said that he will meet with both Democrats and Republicans at the White House next week to go over proposals and move the process forward.

The president, dressed casually for Game Day, told Couric that healthcare reform is still a priority, that jobs are coming back, and that the administration has not decided if the trial of 9/11 mastermind Khalid Sheikh Mohammad will be held outside of New York City.

Regarding healthcare, Mr. Obama said that he is consulting with Democratic leaders and wants to do the same with Republicans, who will be at the White House next week.

"I want to ask them to put their ideas on the table, and then after the recess, which will be a few weeks away, I want to come back and have a large meeting, the Republicans and Democrats, to go through systematically all the best ideas that are out there and move it forward," he said.

Mr. Obama said one reason healthcare reform cannot be abandoned is that a major insurer in California, Anthem Blue Cross, just announced they are increasing their premiums for customers who buy coverage individually and are not covered by a group policy by 39 percent. "That's a portrait of the future if we don't do something now," he said. "It's going to keep on beating down families, small businesses, large businesses; it's going to be a huge drain on the economy. We're going to have to do something about it, and I think we can."

"If we can go step by step through a series of these issues and arrive at some agreements, then procedurally, there's no reason why we can't do it a lot faster than the process took," he added.

Mr. Obama said that he was frustrated by special deals for legislators, such as earmarks, that got into the healthcare reform bills.

"They did not help. They frustrate me," he said. "But this is a democracy. I would have loved nothing better than to simply come up with some very elegant, academically-approved approach to health care, and didn't have any kinds of legislative fingerprints on it and just go ahead and have that passed. But that's not how it works in our democracy. Unfortunately, what we end up having to do is to do a lot of negotiations with a lot of different people, many of whom have their constituents' best interests at heart. What ends up happening is it ends up looking like each individual senator, each individual legislator is just looking out for their own thing, and don't have the larger public interest at heart.

"My job is to make sure that we stay focused on that larger vision of how do we lower costs for Americans over the long-term."

Mr. Obama defended his handling of jobs, but wished the steps taken, such as $200 million in assistance to states to avoid layoffs of teachers, cops and firefighters, were done more quickly.

"Do I wish we could have done it faster? That it hadn't been so painfully slow through the legislative process? Absolutely. But it was the right thing to do then, it continues to be the right thing," he said.

Couric asked about reviewing the practice of reading terrorist suspects their Miranda rights.

Asked about the outcome of the Super Bowl, Mr. Obama said he has a soft spot for the Saints, but the Colts have to be favored.

"They've got perhaps the best quarterback in history. Peyton Manning is unbelievable. They've got a team that has complete confidence in him. Everybody knows the system. There's enormous continuity with that team. So they are tough."

That description sounds like a recipe for the White House to succeed in winning the game, or passing health care reform, with its rookie quarterback.

Following the interview, President Barack Obama and the first lady are hosting a Super Bowl party for lawmakers, Cabinet members and service members and their families who can make it through the snowy streets Washington D.C. to the White House.