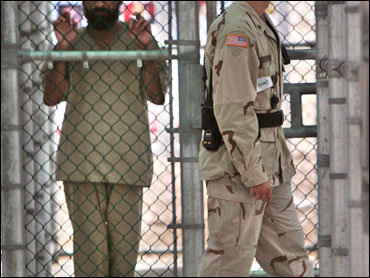 On the seventh anniversary of the opening of the American military prison at Guantanamo Bay, Cuba, where hundreds of detainees have been held for years without trial or even being charged with a crime, President-elect Barack Obama reiterated his promise to close the facility, although he could not promise it would be done quickly.

Obama, who has been receiving daily national security briefings since his election in November, acknowledged that his campaign pledge to close the prison at Guantanamo Bay will be more of a challenge than he anticipated. Many of those held at the military site are suspected terrorists or potential witnesses in cases against them.

"It is more difficult than I think a lot of people realize - and we are going to get it done - but part of the challenge that you have is that you have a bunch of folks that have been detained, many of whom may be very dangerous who have not been put on trial or have not gone through some adjudication," he said.

About 250 detainees are still held there.

Sunday marked the seventh anniversary of the first prisoners arriving at Guantanamo, which was set up after the Sept. 11, 2001, attacks, in order to house suspected terrorists without putting them under the auspices of the American judicial system.

But the Bush administration's attempt to repeal detainees' habeus corpus rights have been knocked down by the Supreme Court, and the taint of torture of some detainees has compromised the military tribunals which the administration has tried to push forth.

In the interview recorded Saturday and broadcast today on ABC's "This Week," Obama told host George Stephanopoulos, that "It is possible for us to keep the American people safe while still adhering to our core values and ideals, and that's what I intend to carry forward in my administration."

Obama would not say whether it could be achieved within the first 100 days of his term, citing the challenge of creating a balanced process "that adheres to rule of law, habeas corpus, basic principles of Anglo-American legal system, but doing it in a way that doesn't result in releasing people who are intent on blowing us up.

"I think it's going to take some time. And, you know, our legal teams are working in consultation with our national security apparatus, as we speak, to help design exactly what we need to do.

"But I don't want to be ambiguous about this. We are going to close Guantanamo and we are going to make sure that the procedures we set up are ones that abide by our Constitution. That is not only the right thing to do but it actually has to be part of our broader national security strategy, because we will send a message to the world that we are serious about our values."

Last week on Face The Nation, Vice President Dick Cheney said he was against closing Guantanamo and that he would, if asked, advise Obama to maintain the Bush administration's controversial interrogation policies and keep Guantanamo open.

"I would hope that for the sake of the nation, that this administration and future administrations will continue those policies," said Cheney, who also said he hoped Obama would not succumb to his "campaign rhetoric" of saying that an Obama administration would not torture.

In the ABC interview Obama said that Cheney continues to defend what he calls "extraordinary measures or procedures" when it comes to interrogations.

"From my view, waterboarding is torture," Obama said. "I have said that under my administration we will not torture."

However, Obama did not promise that his Justice Department would pursue any Bush administration officials who participated in or approved torture.

The Obama transition Web site Change.gov has solicited questions from the public to vote on to have the President-elect answer. The top vote-getter has been a question on whether Obama would appoint an independent special prosecutor "to investigate the greatest crimes of the Bush administration, including torture and warrantless wiretapping."

"We're still evaluating how we're going to approach the whole issue of interrogations, detentions, and so forth," Obama said. "And obviously we're going to be looking at past practices, and I don't believe that anybody is above the law.

"On the other hand I also have a belief that we need to look forward as opposed to looking backwards. And part of my job is to make sure that, for example at the CIA, you've got extraordinarily talented people who are working very hard to keep Americans safe. I don't want them to suddenly feel like they've got to spend all their time looking over their shoulders and lawyering [up]."

"So, no [9/11-style] commission with independent subpoena power?" Stephanopoulos asked.

"We have not made final decisions, but my instinct is for us to focus on how do we make sure that moving forward we are doing the right thing. That doesn't mean that if somebody has blatantly broken the law, that they are above the law. But my orientation's going to be to move forward."

Meanwhile today, demonstrations in more than 35 countries marked the anniversary of Guantanamo's opening with calls on Obama to take clear steps toward closing down Guantanamo during his first 100 days in office.

Last March Kurnaz told CBS' 60 Minutes that after being sold to American forces in Pakistan for a $3,000 bounty, he was imprisoned for five years in Afghanistan and later Guantanamo, during which time he was beaten, waterboarded and given electric shocks. Kurnaz was detained even though U.S. military intelligence knew in 2002 that he had no ties to terrorists.

In Madrid, around 100 demonstrators held a protest outside the U.S. embassy in the Spanish capital.

Libyan-born Deghayes was released in December 2007, and earlier this month was one of eight former Guantanamo detainees who filed lawsuits against the British government claiming they were complicit in their illegal detention.