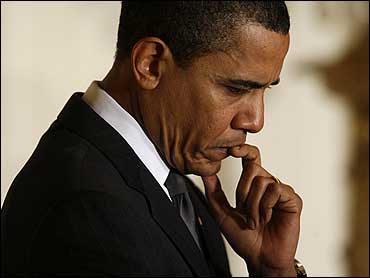 President Barack Obama said Friday that residents of the U.S. Gulf Coast still are trying to rebuild three years after Hurricane Katrina and have not received the support they deserve from Washington.

His words amounted to sharp, though indirect, criticism of former President George W. Bush's oversight of the Katrina recovery efforts. Katrina was blamed for more than 1,600 deaths and $41 billion in property damage.

Mr. Obama promised a stepped-up and sustained commitment to the region.

"The residents of New Orleans and the Gulf Coast who are helping rebuild are heroes who believe in their communities and they are succeeding despite the fact that they have not always received the support they deserve from the federal government," Mr. Obama said in a statement. "We must ensure that the failures of the past are never repeated."

Bush was widely believed to have botched the response to the devastating storm of August 2005 by being too slow to respond. The country watched in shame as the catastrophe cemented images of Bush being out-of-touch: flying over a flooded New Orleans, praising his beleaguered emergency management chief for a "heckuva job."

To provide more support, Mr. Obama said he would extend the Office of the Federal Coordinator for Gulf Coast Rebuilding, a position created by Bush that was set to expire at the end of this month, until September.

Also Friday, Mr. Obama told a gathering of mayors at the White House that the $787 billion economic stimulus package will help struggling cities, but both Washington and the mayors have a responsibility to spend the money wisely.

"The American people are watching," Mr. Obama said. "They need this plan to work. They expect to see the money that they've earned they've worked so hard to earn - spent in its intended purposes without waste, without inefficiency, without fraud."

In the days since the White House and Congress came to terms on the massive economic stimulus package, the political focus has shifted to how it will work. Mr. Obama has staked his reputation not just on the promise of 3.5 million jobs saved or created, but also on a pledge to let the public see where the money goes.

Using his presidential pulpit to discuss the economic stimulus program, Obama demanded accountability, from his friends in local government as well as his own agencies. He said the new legislation gives him tools to "watch the taxpayers' money with more rigor and transparency than ever," and that he will use them.

He used the phrase "call them out" to mean challenge or publicly expose.

"Absolutely. We get called out every day at the local level," Diaz said, drawing laughs from other mayors in a gathering with reporters on the White House driveway. "We have plenty of constituents who will be doing that before the president does."

The economic plan will inject a sudden boost of cash into transportation, education, energy and health care. Beyond new spending, it aims to aid people through a package of tax cuts, extended unemployment benefits and short-term health insurance help. The cost will be added to a growing budget deficit.

Also Friday, the Obama administration is holding the first meeting of its newly formed presidential task force on the auto industry.

The administration announced the formation of the task force earlier this week after deciding not to appoint an auto czar to oversee the multibillion-dollar bailout packages extended to General Motors Corp. and Chrysler LLC.

The two companies submitted requests on Tuesday for an additional $21.6 billion.