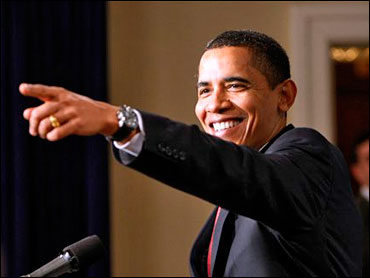 President Barack Obama on Thursday rallied the people he is counting on to help turn around the economy and warned anew that he will not tolerate wasteful spending of his $787 billion economic stimulus package.

"If we see money being misspent, we're going to put a stop to it," Obama told a gathering of state officials.

Vice President Joe Biden, who is coordinating oversight of stimulus spending, opened the conference with an equally stern warning.

"Six months from now, if the verdict on this effort is that we've wasted the money, we built things that were unnecessary or we've done things that are legal but make no sense, then, folks, don't look for any help from the federal government for a long while," he said.

State officials who are working on stimulus spending were invited for a day of schooling on how to make the massive spending program work, to hear from and question Cabinet secretaries and other administration officials, and to propose and discuss ideas.

About 125 people from 49 states filled an auditorium with theater-style seating in the Eisenhower Executive Office Building next to the White House. Idaho was unable to send a representative.

Obama mixed stern language with a pep talk for the state officials he is depending on to help implement the stimulus, which he says will save or create 3.5 million jobs this year and next through investment in infrastructure, energy, schools and other spending.

"All of you are at the front lines of what is probably the most important task that we have in this country over the next couple of years, and that's getting the economy started again," Obama said during his brief appearance. The audience gasped when he entered the room. (Read the full remarks here.)

At the same time, Obama stressed the need to "make sure that every single dollar is well spent."

If wasteful spending is found, "We will call it out and we will publicize it," he said, reiterating what he has already told governors and mayors.

Biden said regulations would be announced Friday outlining what stimulus money cannot be spent on.

"A little hint," he said. "No swimming pools in this money."

Hotsheet: Read about what Vice President Biden said to attendees at the conference.

Biden and Energy Secretary Steven Chu also announced $8 billion in stimulus money for state and local programs to help make homes more energy efficient, with an initial installment of about $780 million to be released in the coming days.

Conference participants heard from officials from the Office of Management and Budget and many of the Cabinet departments. Some of their questions dealt with how states should count the number of jobs created, when they will receive schedules telling them what they should apply for, and about spotty communication with the governors.

Rob Nabors, deputy director of the budget office, said officials were still getting up to speed on the reporting deadlines Congress set, as well as on improving communication with the states.

Wayne Turnage, chief of staff to Virginia Gov. Tim Kaine, told reporters during a break in the conference that the state officials will work with the administration to get answers in the next month or so.

"It's a sweeping piece of legislation. There are some complex issues we have to deal with," Turnage said.

Toney Anaya, a former New Mexico governor appointed by Bill Richardson, the current governor, to oversee stimulus spending in the state, said the officials are grappling with lots of details but that he expected the process would be streamlined.

The officials also said the president's and vice president's warnings about spending the money wisely and keeping the public informed were appropriate.

Separately Thursday, Texas Gov. Rick Perry rejected $555 million in stimulus money to expand state unemployment benefits. An outspoken critic of the stimulus, Perry accepted most of the roughly $17 billion slated for Texas in the plan.