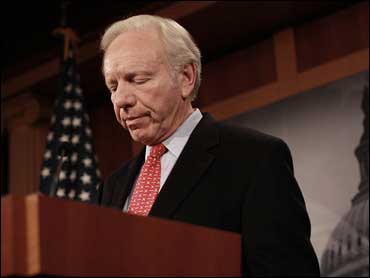 But Obama adds that he won't get involved in the fight on Capitol Hill over whether Democrats should take away Democrat-turned-independent Lieberman's chairmanship of a key committee to punish him for supporting Republican John McCain for president.

"We aren't going to referee decisions about who should or should not be a committee chair," Obama spokeswoman Stephanie Cutter said in a statement Tuesday. "President-elect Obama looks forward to working with anyone to move the country forward. We'd be happy to have Sen. Lieberman caucus with the Democrats. We don't hold any grudges."

Lieberman's affiliation with Democrats is in question after his high-profile support of his pal McCain.

Lieberman has met with Senate Majority Leader Harry Reid of Nevada, but there has been no word on whether Reid intends to try to oust Lieberman as chairman of the Senate Homeland Security and Governmental Affairs Committee.

Last week, Lieberman pledged to put partisan considerations aside and work with Obama. Lieberman, who was Democrat Al Gore's running mate in 2000, was re-elected to the Senate from Connecticut in 2006 as an independent after losing his state's Democratic primary. He remains a registered Democrat and aligns himself with Senate Democrats.

Senate Republican leader Mitch McConnell of Kentucky spoke to Lieberman last week about the possibility of Lieberman's caucusing with the GOP.

In the past, Democrats tolerated Lieberman's political straddling because he held their slim political majority in his hands. Now that Democrats have strengthened their hold on the Senate, there could be added pressure to punish Lieberman.