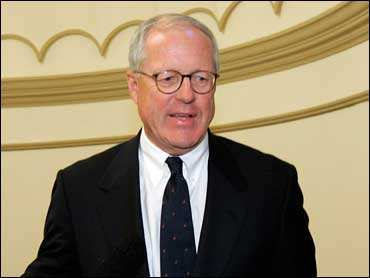 "Jim did not want to distract in any way from the very important task of gathering information about my vice presidential nominee, so he has made a decision to step aside that I accept," Obama said in a statement. "We have a very good selection process under way, and I am confident that it will produce a number of highly qualified candidates for me to choose from in the weeks ahead. I remain grateful to Jim for his service and his efforts in this process."

Johnson, the former chairman of mortgage lender Fannie Mae, received loans with the help of the CEO of Countrywide Financial Corp., which is part of a federal investigation in the midst of the subprime mortgage crisis. The story was first reported by the Wall Street Journal. (Read more about the controversy.)

Republican presidential candidate John McCain had accused Obama of hypocrisy for speaking out against Countrywide's tactics while his vetter got favorable rates on three home mortgages totaling $1.7 million.

In a statement, Johnson said his withdrawal did not mean he accepted any of the charges levied against him in recent days.

"I am extremely proud of my service to Fannie Mae and in other important dimensions of public service," Johnson said. "This withdrawal should in no way imply that I accept the blatantly false statements and misrepresentations that have been written about me in recent days."

"Jim Johnson's resignation raises serious questions about Barack Obama's judgment," said McCain spokesman Tucker Bounds. "Selecting the vice presidential nominee is the most important decision a presidential candidate can make and one even Barack Obama has said will 'signal how I want to operate my presidency.' By entrusting this process to a man who has now been forced to step down because of questionable loans, the American people have reason to question the judgment of a candidate who has shown he will only make the right call when under pressure from the news media. America can't afford a president who flip-flops on key questions in the course of 24 hours. That's not change we can believe in."

Johnson brought the most experience to the vetting team, having filled the same role for Democratic nominees John Kerry in 2004 and Walter Mondale in 1984. He and Holder had been holding meetings this week with lawmakers on Capitol Hill to seek their input on possible running mate candidates.

On Tuesday, Obama said Johnson had a "discrete task" and was performing it well. He suggested the Countrywide connection was not a problem since Johnson was an unpaid volunteer and hadn't been assigned to work in a future administration.

"I am not vetting my V.P. search committee for their mortgages," Obama said at the time.