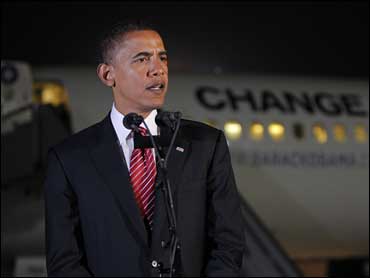 Democratic presidential contender Barack Obama vowed on Tuesday to work for a breakthrough in Israeli-Palestinian peace negotiations "starting from the minute I'm sworn into office."

In a news conference here before departing for Israel, he said any U.S. involvement in peace talks must recognize not only Israel's security concerns but also the economic hardships facing Palestinians.

He said he would continue to regard Israel as a valued ally. "That policy is not going to change," he said.

"What I think can change is the ability of the United States government and a United States president to be actively engaged with the peace process and to be concerned and recognize the legitimate difficulties that the Palestinian people are experiencing right now."

Arriving in Jerusalem later Tuesday, Obama said he hoped his administration would strengthen the historic special relationship between the United States and Israel and, citing a Palestinian attack in downtown Jerusalem earlier in the day, pledged "to work diligently, urgently and in a unified way to defeat terrorism."

Obama, in the midst of a weeklong high visibility foreign trek, also acknowledged the long history of Middle East tensions that would confront him if he were to become president.

"It's unrealistic to expect that a U.S. president alone can suddenly snap his fingers and bring about peace in this region," he said.

Obama was in Afghanistan and Iraq before arriving in Jordan on Tuesday for talks with King Abdullah II. He planned to leave for Israel later in the day. He then is scheduled to travel to Europe.

Jordan's king told Obama that an evenhanded U.S. policy would bolster America's credibility in the Middle East and that achieving Palestinian statehood is essential for ending the Arab-Israeli conflict, according to a royal palace statement summarizing Abdullah's remarks during a closed-door meeting with the Illinois senator Tuesday at Abdullah's private Amman residence.

Obama condemned an attack in Jerusalem on Tuesday, where a Palestinian man rammed a construction vehicle into cars and a bus near the downtown hotel where Obama was scheduled to stay later in the day. An Israeli civilian shot and killed the driver. Several people were injured in the attack, which resembled a deadly vehicle assault that took place in the city earlier this month.

"Today's bulldozer attack is a reminder of what Israelis have courageously lived with on a daily basis for far too long," Obama said.

Campaign aides said Obama intends to visit a southern Israeli town that is a frequent target of rockets fired by Palestinian militants in Gaza.

The stop in Sderot is part of a crowded day of events on Wednesday in which the Illinois senator has also arranged to meet with Palestinian President Mahmoud Abbas in Ramallah on the West Bank and with Israeli leaders.

Susan Rice, a foreign policy adviser, said Obama wanted to go to Sderot because it is a "place in which Israel's security is every day at risk and threatened. And Sen. Obama will have the opportunity to see that first hand and get a very personal feel for the everyday" difficulties. His schedule indicates he intends to spend slightly more than an hour there.

Obama's trip to Iraq and Afghanistan was an official congressional trip, paid for with federal funds. The balance of his travels are financed by his presidential campaign.

The Illinois Democrat is working to shore up support among U.S. Jewish voters, many of whom supported Hillary Rodham Clinton in the battle for the party's presidential nomination, and some of whom have questioned his commitment to Israel.

Obama's schedule for Wednesday also includes a visit to Yad Vashem, the Israeli memorial to the victims of the Holocaust. Aides said a stop at the Western Wall, one of the holiest places in Judaism, was also a possibility.

In addition to Abbas, Obama's meeting list for the day includes Israeli Prime Minister Ehud Olmert and members of his Cabinet as well as Benjamin Netanyahu, head of the opposition Likud party and a former prime minister.

In his news conference, Obama alluded to the internal domestic problems facing Olmert, who is facing allegations of corruption, and the political schism among Palestinians.

"One of the difficulties that we have right now is that in order to make those compromises you have to have strong support from your people, and the Israeli government right now is unsettled," he said. "You know, the Palestinians are divided between Fatah and Hamas."

He compared the existing circumstances with those that permitted Egyptian President Anwar Sadat and Israeli Prime Minister Menachem Begin to sign a peace treaty in 1979.

"Those leaders were in a much stronger position to initiate that kind of peace," Obama said.