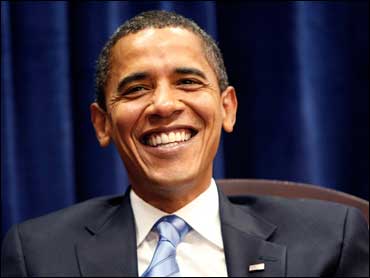 Calling climate change an urgent challenge, President-elect Barack Obama promised Tuesday that Washington would take a leading role in combating it in the United States and throughout the world.

"My presidency will mark a new chapter in America's leadership on climate change," Mr. Obama said in a video message to governors and others attending a Los Angeles summit on the issue.

In the roughly four-minute message, Mr. Obama reiterated his support for a cap-and-trade system approach to cutting green house gases. He would establish annual targets to reduce emissions to their 1990 levels by 2020 and reduce them another 80 percent by 2050. Mr. Obama also promoted anew his proposal to invest $15 billion each year to support private sector efforts toward clean energy.

President Bush has been criticized for failing to do enough to combat climate change and Mr. Obama has promised quick action to address the issue. He may have to start tackling the issue through administrative actions, given that leaders in the Democratic-controlled Congress have indicated that they aren't likely to act until 2010 on a bill to limit the heat-trapping gases blamed for global warming.

At a news conference Tuesday, a coalition called the U.S. Climate Action Partnership — made up of 32 leading corporations, including electric utilities and oil companies, and environmental groups — urged Mr. Obama to press Congress to approve legislation next year for a mandatory cap-and-trade system to limit the release of carbon dioxide from burning fossil fuels and other greenhouse gases. Opponents of such action argue controls on carbon dioxide emissions will increase energy costs.

Under a cap-and-trade program, the government would establish a ceiling on the amount of carbon dioxide that can be released into the air from burning fossil fuels. A utility or industrial plant would have to purchase emission allowances for every ton of pollution released. Anyone who exceeds the cap must either make pollution reductions or buy additional allowances, while those who cut emissions below the cap would be able to sell allowances. Initially the cap would be relatively high and then be lowered gradually to achieve the targeted pollution reductions.

Mr. Obama favors auctioning off all of the allowances and using the proceeds to invest in energy efficiency and alternative, non-fossil energy that does not add to global warming. Others argue the allowances should be provided for free to reduce the economic costs and then be freely bought and sold in the market place.

In his remarks to the summit, Mr. Obama criticized Washington for failing to lead on the issue in the past.

Scientists, environmentalists and government and industry officials were attending the two-day Governors' Global Climate Summit in Los Angeles, held ahead of a U.N. gathering in Poland next month.

Mr. Obama said he won't attend that conference but that he has asked Congress members who will to report back to him. "Once I take office, you can be sure that the United States will once again engage vigorously in these negotiations, and help lead the world toward a new era of global cooperation on climate change," Mr. Obama said.