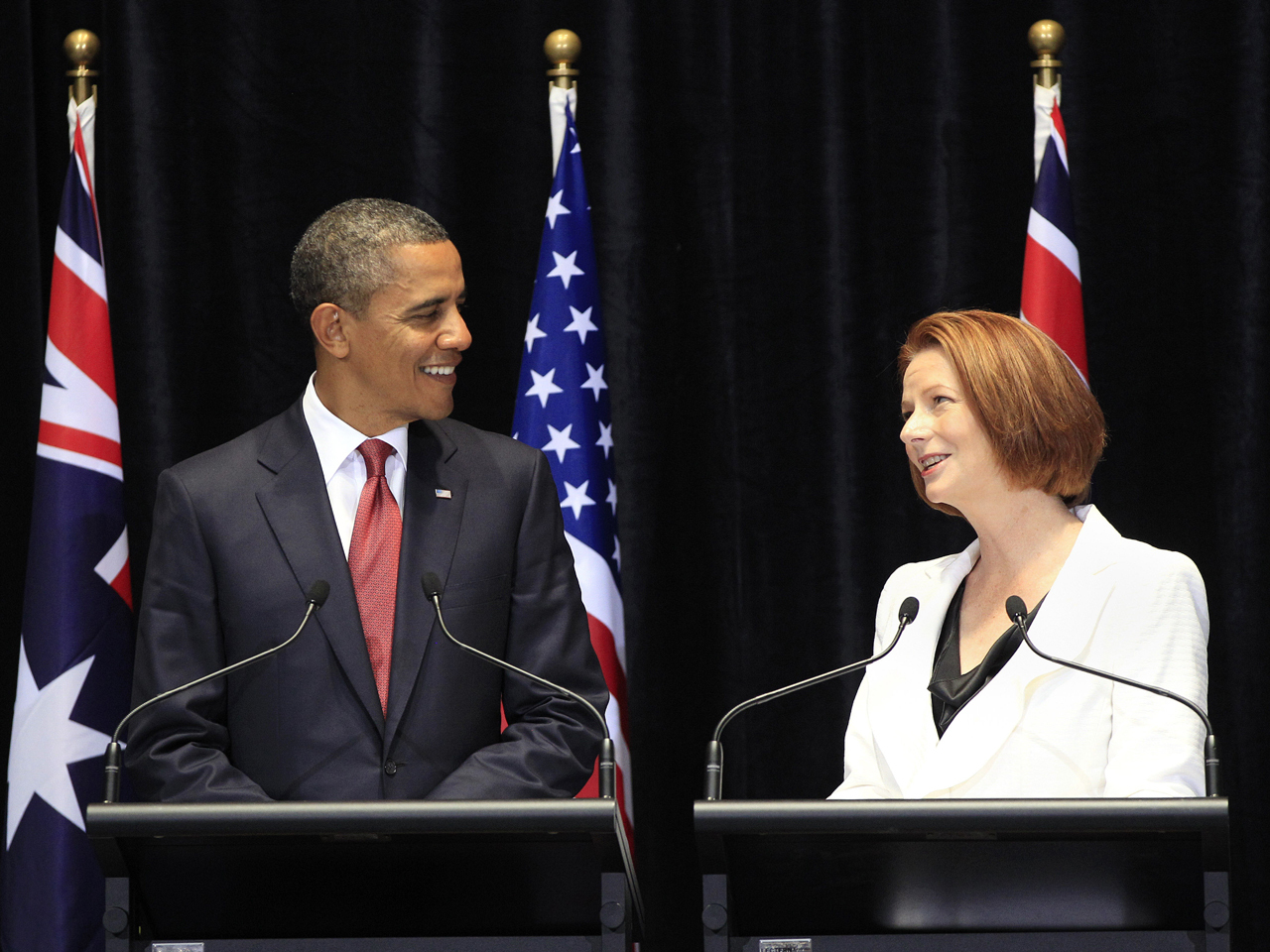 CANBERRA, Australia - President Obama insisted Wednesday that the United States does not fear China, even as he announced a new security agreement with Australia that is widely viewed as a response to Beijing's growing aggressiveness.

China responded swiftly, warning that an expanded U.S. military footprint in Australia may not be appropriate and deserved greater scrutiny.

The agreement, announced during a joint news conference with Australian Prime Minister Julia Gillard, will expand the U.S. military presence in Australia, positioning more U.S. personnel and equipment there, and increasing American access to bases. About 250 U.S. Marines will begin a rotation in northern Australia starting next year, with a full force of 2,500 military personnel staffing up over the next several years.

Mr. Obama called the deployment "significant," and said it would build capacity and cooperation between the U.S. and Australia. U.S. officials were careful to emphasize that the pact was not an attempt to create a permanent American military presence in Australia.

The president spoke shortly after arriving in the Australian capital, his second stop on a nine-day tour of the Asia-Pacific region. After a 10-hour flight from Honolulu, where he hosted an economic summit, Mr. Obama headed straight into meetings with Gillard.

On Thursday, Mr. Obama will address the Australian Parliament, then fly to the northern city of Darwin, where some of the Marines deploying to Australia next year will be based.

During his news conference with Gillard, the president sidestepped questions about whether the security agreement was aimed at containing China. But he said the U.S. would keep sending a clear message that China needs to accept the responsibilities that come with being a world power.

"It's important for them to play by the rules of the road," he said.

And he insisted that the U.S is not fearful of China's rise.

China was immediately leery of the prospect of an expanded U.S. military presence in Australia. Foreign Ministry spokesman Liu Weimin said Wednesday that it was worth discussing whether the plan was in line with the common interests of the international community.

Obama national security aide Ben Rhodes said the agreement was not only appropriate, but also a response to the demand from nations in the region that have signaled they want the U.S. to be present.

The U.S. and smaller Asian nations have grown increasingly concerned about China claiming dominion over vast areas of the Pacific that the U.S. considers international waters, and reigniting old territorial disputes, including confrontations over the South China Sea. China's defense spending has increased threefold since the 1990s to about $160 billion last year, and its military has recently tested a new stealth jet fighter and launched its first aircraft carrier.

Defense Secretary Leon Panetta has said that the goal of the new security pact is to signal that the U.S. and Australia will stick together in face of any threats.

In addition to the expanded Marine presence in Australia, more U.S. aircraft will rotate through Australia as part of an agreement between each nation's air force. Mr. Obama and Gillard said the increased air presence would allow the U.S. and Australia to more effectively respond to respond to natural disasters and humanitarian crises in the region.

Rhodes said the U.S. military boost would amount to a "sustained U.S. presence." He distinguished that from a permanent presence in the sense that the U.S. forces will use Australian facilities, as opposed to the United States to building its own bases, as it has in such regional places as South Korea. The U.S. has not signaled any interest in that in Australia.

The only American base currently in Australia is the secretive joint Australia-U.S. intelligence and communications complex at Pine Gap in central Australia. But there are hundreds of U.S. service personnel in Australia on exchange.

During Wednesday's brief news conference, Mr. Obama and Gillard also fielded questions on a range of other issues, from U.S. efforts to address climate change to the debt crisis in Europe.

Mr. Obama reiterated his call for urgent action by European leaders to back the euro and develop a financial firewall to keep the threat of default facing Greece and Italy from spreading across the Eurozone.

"The problem right now is one of political will, it's not a technical problem," Mr. Obama said. "At this point, the larger European community has to stand behind the European project."

Asked whether the U.S. would be able to lower carbon emissions through a cap-and-trade system as Australia is undertaking, Mr. Obama conceded the U.S. has been unable to pass such a plan through Congress, but noted U.S. efforts to increase vehicle fuel efficiency and to explore clear energy options. He said emerging economies such as India and China must also assume responsibility for addressing climate change.

For Mr. Obama and Australia, the third time's the charm. He canceled two earlier visits, once to stay in Washington to lobby for passage of his health care bill, and again in the wake of the oil spill in the Gulf of Mexico.

"I was determined to come for a simple reason: The United States of America has no stronger ally than Australia," he said.