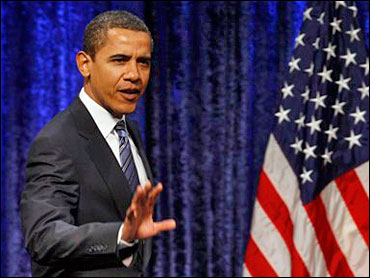 President-elect Barack Obama warned of dire and lasting consequences if Congress doesn't pump unprecedented dollars into the national economy, making an urgent pitch Thursday for his mammoth spending proposal in his first speech since his election.

Since his November election, he has deferred to President George W. Bush on foreign policy matters such as the Middle East. But, with the urgency of the economic crisis, Mr. Obama has waded deeply into domestic issues as he works to generate support for his plan to create jobs, jolt the economy and make long-term investments in other areas.

In the speech at George Mason University outside of Washington, Mr. Obama cast blame on "an era of profound irresponsibility that stretched from corporate boardrooms to the halls of power in Washington."

But he added, "The very fact that this crisis is largely of our own making means that it is not beyond our ability to solve. Our problems are rooted in past mistakes, not our capacity for future greatness."

Still, his remarks shed little new light on the details of his plan that could cost as much as $775 billion over two years in tax cuts and spending intended to jolt the economy and create new jobs.

And given the breadth of the problem implementing a recovery plan might be too daunting a task.

"It's just not that easy to figure out how to stimulate an economy in this condition," writes CBS News chief political consultant Marc Ambinder. "In a normal recession, small tax cuts might boost savings, which, if the economy were growing, would be fine. But Obama needs Americans to spend, spend, spend, and not to save."

About $300 billion of Mr. Obama's package would be for tax cuts or refunds for individuals and businesses. But those tax cuts ran into opposition Thursday from senators in his own party who said they wouldn't do much to stimulate the economy or create jobs.

Senators from both parties agreed that Congress should do something to stimulate the economy. But Democratic senators emerging from a private meeting of the Senate Finance Committee criticized business and individual tax cuts in Mr. Obama's stimulus plan.

They were especially critical of a proposed $3,000 tax credit for companies that hire or retrain workers.

"If I'm a business person, it's unlikely if you give me a several-thousand-dollar credit that I'm going to hire people if I can't sell the products they're producing," said Sen. Kent Conrad, D-N.D., a member of the committee.

"That to me is just misdirected," Conrad said.

The speech marked Mr. Obama's highest-profile effort yet on an issue certain to define and dominate his early presidency.

"I don't believe it's too late to change course, but it will be if we don't take dramatic action as soon as possible," he said.

Governors of six states and mayors of 14 cities - a bipartisan audience that came from as far away as Minnesota and Utah to be among the few hundred in attendance - listened to the speech that lasted less than a half hour. Included were Mayor Michael Bloomberg of New York City.

Mr. Obama asked Congress to work day, night and on weekends if necessary to pass a revival plan within the next few weeks so that it can be ready for his signature shortly after he takes office on Jan. 20.

"There are signs in Washington that this stimulus package is getting bogged down a bit," said CBS News correspondent Chip Reid. "He wants the American people to understand how bad things are. It is potentially catastrophic and he wants to light a fire under Congress and get them to do this and do it quickly."

Click here for more analysis from the CBS News team.

The speech came amid a grim economic backdrop. The Labor Department reported Thursday that total unemployment claims jumped to around 4.6 million last week, even though the number of new claims dropped unexpectedly.

For all of 2008, employers probably slashed payrolls by at least 2.4 million. And some economists predict a jump in the jobless rate from 6.7 to 7 percent in December, which would be the highest in more than 15 years, reports CBS News correspondent Priya David. The Labor Department will release the latest unemployment figures Friday.

Of the 3.2 million jobs that the Obama administration says will be saved or created, a million of those jobs will come from a $25 billion investment in infrastructure - building and renovating roads, bridges and schools while making a long-term investment in renewable energy and "green" initiatives, reports CBS News correspondent Kelly Wallace.

On Wednesday, news of an unparalleled federal budget of $1.2 trillion for the 2009 budget year was revealed, according to a Capitol Hill aide briefed on new Congressional Budget Office figures.

Mr. Obama acknowledged the new stimulus spending will "certainly add to the budget deficit." He also acknowledged some sympathy with those who "might be skeptical of this plan" because so much federal money has already been spent or committed in an attempt - largely unsuccessful so far - to get credit, the lifeblood of the American economy, flowing freely once again.

Such statements are coded to appeal to budget hawks in both parties, whom Mr. Obama wants to win over so that approval of a package draws wide, bipartisan support in the Democratic-led Congress.

Mr. Obama also pledged to keep his stimulus plan free from pork barrel spending, telling Congress that "this must be a time when leaders in both parties put the urgent needs of our nation above our own narrow interests."