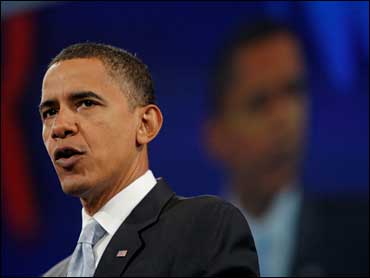 Democrat Barack Obama said Monday that as president he would send at least two more combat brigades to Afghanistan, where U.S. soldiers face rising violence and endured their deadliest attack in three years on Sunday.

The proposed force increase - about 7,000 troops - is part of Obama's plan to pull combat troops out of Iraq and focus on the growing threat from a resurgent al Qaeda in Afghanistan.

"As president, I would pursue a new strategy, and begin by providing at least two additional combat brigades to support our effort in Afghanistan," Obama said in an op-ed published Monday in The New York Times, a day before he plans a speech here on his vision for Iraq and Afghanistan.

"I would not hold our military, our resources and our foreign policy hostage to a misguided desire to maintain permanent bases in Iraq," Obama said.

Obama's campaign said his speech will focus on how missteps in Iraq have hurt efforts to strengthen U.S. security. He will also discuss his plans for the new brigades in Afghanistan, call for Pakistan to step up efforts dealing with terrorists, discuss the need for diplomacy to address Iran's nuclear program and address other global challenges such as climate change and energy security.

McCain is planning to speak about his plan for Afghanistan Thursday. He told reporters Monday, "I think we need to do whatever is necessary and that could entail more troops."

U.S. commanders have said they need up to three more brigades in Afghanistan - or as many as 10,000 additional troops - to both train Afghan forces and battle the insurgency. President Bush and Defense Secretary Robert Gates have promised to beef up the U.S. force in Afghanistan next year, but military leaders have made it clear they won't be able to do that until they can reduce forces in Iraq.

Obama says he will do that, redeploying combat brigades out of Iraq by summer 2010. He wrote that he would leave in place a residual force of undetermined size behind to "perform limited missions" like going after remnants of al Qaeda and training Iraqi forces.

"Ending the war is essential to meeting our broader strategic goals, starting in Afghanistan and Pakistan, where the Taliban is resurgent and al Qaeda has a safe haven," Obama wrote. "Iraq is not the central front in the war on terrorism, and it never has been."

McCain took issue with that point. "He was wrong when he said we've lost the war, and he is wrong today when he says that Iraq is not the central battleground," the Arizona senator said. "We are winning there and his proposals would jeopardize the fragility of the success we've achieved. And his refusal to acknowledge that success is remarkable."

There are currently 36,000 U.S. forces in Afghanistan, including 17,500 serving with the NATO-led coalition and another 18,500 conducting training and counterinsurgency. The recent spike in U.S. troops there resulted largely from the overlap of one brigade moving into the country, as another is preparing to leave.

Violence is on the rise in Afghanistan. Monthly death tolls of U.S. and NATO troops in Afghanistan surpassed U.S. military deaths in Iraq in May and June, and a militant attack Sunday on a remote military outpost killed nine American soldiers, the deadliest assault on U.S. forces in Afghanistan in three years.

In his op-ed, Obama defended his opposition to President Bush's increase of troops in Iraq despite its success in helping bring down the violence in that country. He credited the increase for protecting Iraqis and weakening al Qaeda's effectiveness.

"But the same factors that led me to oppose the surge still hold true," Obama said. "The strain on our military has grown, the situation in Afghanistan has deteriorated and we've spent nearly $200 billion more in Iraq than we had budgeted. Iraq's leaders have failed to invest tens of billions of dollars in oil revenues in rebuilding their own country, and they have not reached the political accommodation that was the stated purpose of the surge."

McCain criticized Obama for his stance on the surge. "The major point here is that Senator Obama refuses to acknowledge that he was wrong," McCain said. "He said that the surge couldn't succeed. He said he opposed the increase in troops. The surge has succeeded."