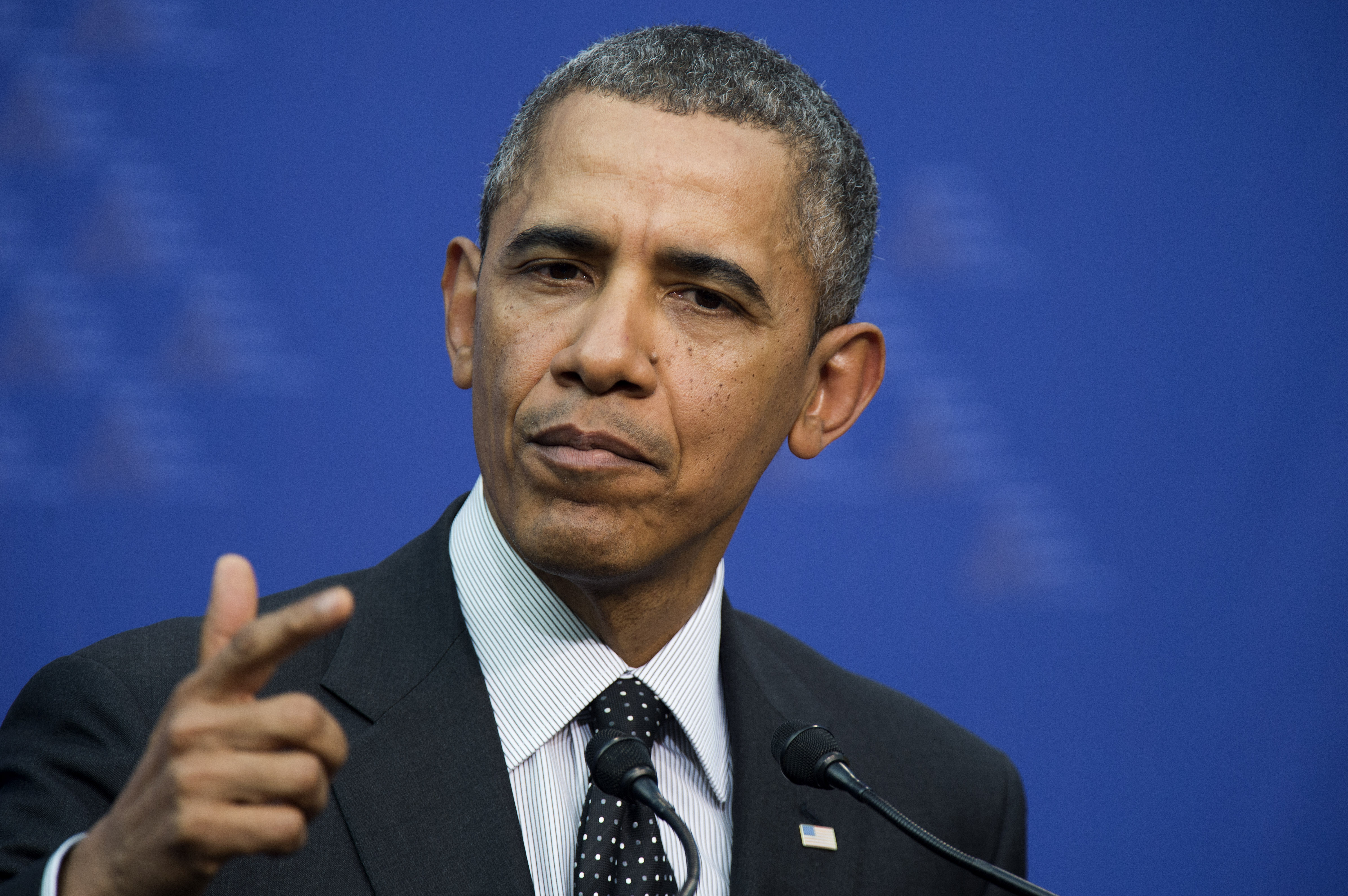 Moments after deflecting a question about his diminished influence on the world stage, President Obama described Russia as a "regional power" operating in Crimea out of weakness, not strength.

I guess that's why Ukraine's defense minister resigned and Ukrainian troops bugged out of Crimea, leaving it to Russian forces. This is the only "off ramp" that matters in Crimea. Ukraine and its rhetorically florid Western allies took it. Not Putin.

Even as the White House insists Crimea is not "lost" (Putin can find it without satellite imagery, after all), the grudging language of concession seeps from every corridor of Ukrainian talks here.

"It's not a done deal in the sense that the international community by and large isn't recognizing the annexation of Crimea," Obama said, before acknowledging the "facts on the ground" favored Russia. "It would be dishonest to say there is a simple solution to resolving what has already taken place in Crimea."

Obama and European leaders are rattled and resentful, thunderstruck that the wispy bonds of international "norms" could be so easily shredded. Fearful of the precedent they appear incapable of reversing, and desperate to limit Putin's ambitions to Crimea, the G-7 nations have effectively conceded Crimea. They threatened "sectoral sanctions" if Putin further bulldozed international law by gobbling up more of Ukraine or plowing into Moldova. Weak or strong, Putin enforces the new Crimean status quo. All he's lost is Russia's G-8 membership pin and decoder ring.

The relentless focus on Putin's land grab and the West's gradualist economic response misses some relevant history. Some analysts contend the seeds were first planted when Russia attacked Georgia in 2008 and the West--led by a war-depleted, lame-duck George W. Bush--didn't even impose low-level sanctions and visa bans in play now. That signaled acquiescence to aggression and probably whetted Putin's appetite.

But I would argue Putin drew more conclusions about the West's take on his undisguised territorial ambitions in 2010. That's when France agreed "in principle" to sell Russia four Mistral class amphibious landing ships. The $1.7 billion arms deal, the first between Europe and Russia since 1945, promised Russia four vessels that would revive its aging Black Sea fleet and transform its ability to project power there and the Baltics. The vessels are like small aircraft carriers, able to move 16 helicopters, four landing barges, 70 vehicles (including armored tanks), and a battalion of soldiers. It's worth noting that when this sale was first hatched, Russia's new military doctrine identified NATO as Russia's top strategic threat.

The deal was formalized in 2011. Comments from the interested parties are, well, illuminating.

First, then-French President Nicolas Sarkozy: "The Cold War is finished. We have to consider Russia a friend and have to work with her to build a vast area of security and prosperity together."

Then Putin: "I can assure you that if we purchase this armament we will use it wherever deemed necessary."

Corum wrote: "Yet, as appallingly incompetent as the Western leaders such as [Britain's Neville] Chamberlain and [France's Edouard] Daladier were when confronted with a threat to democratic nations--at least they were not so stupid as to sell Nazi Germany their latest weapons in order to guarantee German success."

Even after Putin moved into Crimea, France's first inclination was to uphold the Mistral deal, calling any move to kill it an "extreme measure" best avoided. Defense Minister Jean-Yves Le Drian implausibly described the warships as little more than freighters. "We will deliver civilian hulls. The client can then arm the two ships. We will deliver, under the signed contract, a package which is unarmed."

How comforting this must have been to Ukraine's transitional government and nervous leaders in the Baltics and Moldova. By the way, the first French-made vessel, the Vladivostok, is already undergoing sea trials. The second ship, appropriately named the Sevastopol, is due for delivery at the end of 2015. The Mistral deal could be revoked if--and only if--Russia flexes more military muscle in the region. So, if Russia only violates international law in Crimea it can keep its contract for four amphibious vessels, thereby shifting naval power through the region in its favor for decades. Talk about playing the long game.

Obama's curdled disdain for Putin notwithstanding, this doesn't sound like a position of weakness or diminished influence. But it does sound like the West is now suddenly uncomfortable with the cold realities spawned by the arms deals it wrought.