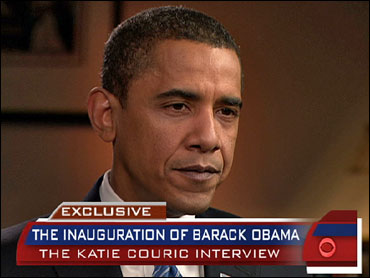 As Barack Obama prepared to move to 1600 Pennsylvania Avenue, he sat down with Katie Couric for an exclusive interview. They discussed what the nation should expect from its new president.


Katie Couric: Are you starting to realize the enormity of your new job?

Barack Obama: Over the last several weeks, we've been working on a whole bunch of stuff having to do with the economy, putting people back to work. So, in some ways, this transition's been so unusual. We've had to do so much work on the front end that I think January 21st is not gonna feel that different from January 19th or January 17th. We're really just -- moving offices.

But having said that, I think when you're sitting in the Oval Office -- you're very clear that -- these decisions count. And I think the magnitude of it is humbling.

Katie Couric: How do you balance the optimism and hope that surrounded your election with realistic expectations?

Barack Obama: Well, it turns out that the American people, I think, are in a pretty good place -- in the sense that they are hopeful and optimistic about what a new administration may bring. But they're realistic about what's gonna be accomplished in the first year or the first 18 months.

I think that they recognize that we're not gonna magically eliminate some of the problems that we've had, but that we can make steady progress.

Katie Couric: And you're not gonna sugar coat it, are you?

Barack Obama: No. -- one of the things that I am -- absolutely convinced of is that these are times that call for -- for complete honesty with...

Katie Couric: Straight talk, to borrow a phrase from your former opponent!

Barack Obama: Straight talk. Absolutely. Well, but -- but I think people desperately -- they're hungry for that. They just don't want -- spin and -- sound bites. My goal is, throughout the presidency, is gonna be to speak honestly with the American people, not to talk down to them, not to try to dumb things down. The American people are plenty smart.

The rest of Cour's interview with Mr. Obama will be broadcast in the CBS News special, "Dream Big: The Inauguration of Barack Obama" Tuesday night.